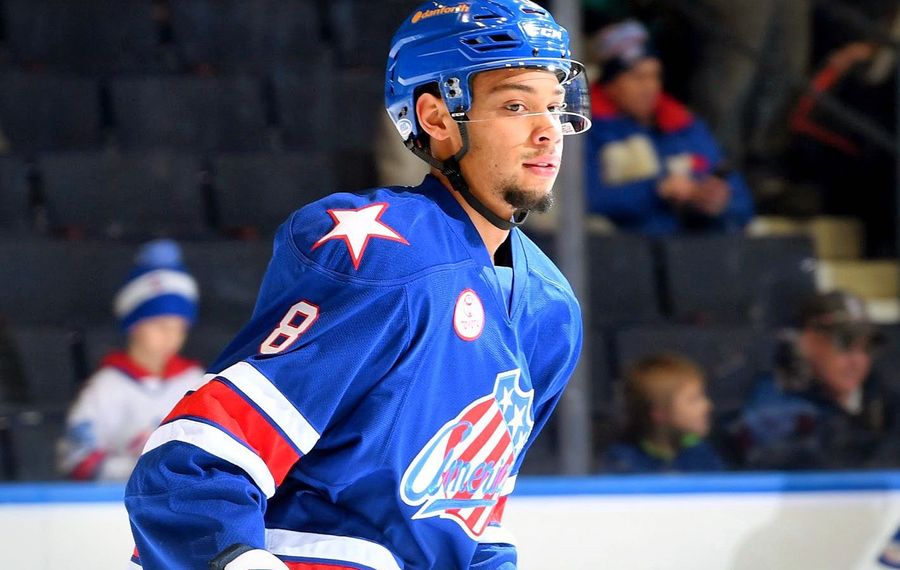 ROCHESTER – Once prospects get over the initial disappointment of being assigned to the ECHL, they often realize the league can be a terrific place to develop.

“The game is built around confidence, and it’s always a blow to your confidence when you get assigned back to a level that you were hoping you wouldn’t be in,” said Matt Thomas, who coaches the Cincinnati Cyclones, the Sabres’ ECHL affiliate.

But in addition to extra playing time, the league that bills itself as “AA hockey” can offer youngsters opportunities they likely wouldn’t enjoy in the American Hockey League.

“You can play the game you want to play a little bit more; not the game you’re just flat-out required to play,” Thomas said. “So there’s a little bit more leeway in terms of taking some chances and growing from mistakes. One mistake isn’t going to have you parked at the end of the bench where you’re not going to see the ice for the rest of the night.”

The league has buoyed the growth of defenseman Devante Stephens, a prospect the Sabres drafted in the fifth round in 2015, 122nd overall.

Instead of receiving short minutes with the Americans or sitting out, Stephens, 21, has morphed into a trusted defenseman with the Cyclones, drawing regular duty against the opposition’s top line.

“I just needed to play,” Stephens said earlier this month in Blue Cross Arena during his brief recall to the Amerks. “You look at the D-men roster up here, and there’s a lot of D-men. I don’t know if I would’ve got as much ice time as I would’ve needed. …

“Just playing those game reps, that’s how you develop your game, right?”

Besides a gaudy plus-21 rating, which led the ECHL entering Saturday’s games, Stephens had scored five goals and 15 points in 27 games. Stephens compiled zero goals and eight assists in 33 games as an ECHL rookie last season.

“When Buffalo drafted him, they wanted to see him become a certain type of defenseman … and this level is allowing him to discover that,” Thomas said.

A torn labrum and broken orbital sidelined him much of the season.

“Game one of this season to today, I think his growth is his habits and how he practices and how he shows up and how he prepares,” Thomas said. “He’s really been able to develop a routine that’s shown him success and allowed him to be consistent as a pro. I think a lot of it for him was getting into a rhythm.”

Part of that rhythm includes Stephens utilizing his speed. That’s why Thomas uses him in a shutdown role. Stephens’ feet have also helped him create more offense.

“He’s got a lot of raw ability, but his skating is certainly his No. 1 asset,” Thomas said. “I think like all players, when he’s in that zone, and you couple that with his skating, that’s when you really see him jump up into the play and create offense in his game.

“But his feet give him a lot of leeway to take some risks up ice and the ability to get back and defend and not have it cost him.’

“I don’t let a lot of goals against me,” Stephens said. “But I think with maturity comes developing your game. Obviously, you look at the D-men in the NHL now, they can all score goals and contribute that way.”

Four other Sabres draft picks – defenseman Anthony Florentino, forwards Vasily Glotov and Judd Peterson and goalie Jonas Johansson – have played for the Cyclones this season. However, only Johansson and Stephens have NHL contracts.

The path from the ECHL to the NHL can be arduous. Just one current Sabre, goalie Carter Hutton, played in the league.

“It’s a league that’s up-and-coming,” Stephens said. “It’s a lot better than it used to be. There’s a lot of skill down there. I think that’s why my offense is getting a little better, there’s a little bit more room down there.”

Thomas said the NHL recognizing the value in “AA” hockey has helped the ECHL grow. The changes taking place at hockey’s highest level quickly trickle down.

“It’s pretty remarkable to see how quickly those changes are becoming visual and evident at the different levels,” Thomas said.

“It’s created a wealth of talent at this level that the league hasn’t seen across the board,” Thomas said.

Nylander, the eighth overall pick in 2016, missed Saturday’s 4-3 road loss to the Utica Comets. The Swede has compiled eight goals and 21 points in 30 games this season.

The Amerks' first game of the new year is Wednesday against visiting Bridgeport.