Jim Kubiak will be analyzing the play of the Buffalo Bills quarterbacks throughout the season for BNBlitz.com. Kubiak is the all-time leading passer at Navy, has played in the NFL, NFL Europe and the Arena Football League, and has been a coach and executive in the AFL. He spent eight years as the radio analyst for the University at Buffalo and runs the Western New York Quarterback Academy to help develop the next generation of quarterbacks.

Quarterbacks are graded each quarter using a “Doing Your Job” grading system for every play. Josh Allen’s overall quarterback performance grade of 91 percent led the Buffalo Bills to an impressive 25 point margin of victory.

Josh Allen was 17 of 26 for 224 yards, three touchdowns and one interception. He also had two rushing touchdowns and 95 yards on the ground with only nine carries. Statistically, this was an exemplary performance by Allen, who continues to look more like a seasoned veteran as he grows in his role every week.

Buffalo jumped out to a 14-0 lead in the first quarter thanks to Allen’s fast start. Allen was 7 for 8 with one rushing touchdown and one passing touchdown in the quarter.

He was highly efficient throwing the football and made several crucial plays resulting in points.

On Buffalo’s first drive of the game on third-and-16 from Miami’s 47-yard line, the Bills were lined up in an “empty” formation. Allen dropped back to pass. Miami brought a five-man pressure, which forced him to shuffle to his right to avoid free rusher, Cameron Wake. Allen continued to roll to buy time to avoid the sack and allow his receivers to adjust. 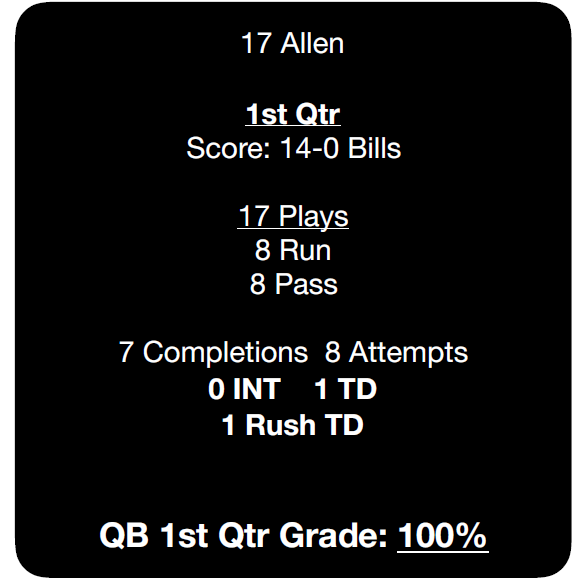 Chris Ivory was lined up as a receiver in the slot to Allen’s right. He adjusted his short route and moved toward the middle of the field away from the Miami defender that had reacted to Allen’s movement. Allen attracted the defense to his scramble, opening up enough space to drop the ball to Ivory at the 35. The play ultimately for 46 yards.

This was an impactful decision and accurate throw by Allen on the run, above the defenders, and under extreme duress.

Allen’s ability to improvise and make plays like this sets him apart from other NFL pro-style quarterbacks. He is demonstrating that he has a Ben Roethlisberger-like ability using his unique size, speed and elusiveness to
make plays that no one else can make on a consistent basis.

After a roughing the passing penalty was tacked on, the Bills had first-and-goal at the 1. Allen's first rushing touchdown put the Bills in the lead, 7-0.

On the next extended offensive series — an 11-play drive that bridged the end of the first quarter and start of the second — Allen slipped and fell in the pocket. Miami’s Kiko Alonso had blitzed.

Amazingly, Allen was able to get up, avoid the rushers bearing down on him, and scramble for a first down. This was a high-effort play by Allen that very few quarterbacks would have been capable of making. He was able to keep the drive alive, turning this potentially negative play into a first down.

Allen’s play by play grading in the second quarter was 75 percent compared to his 100 percent in the first quarter. He was flagged for intentional grounding on third-and-5, a play in which he was trying to do too much on his scramble. Surrounded and in a desperate attempt to throw the ball away, Allen blindly pitched the ball out of bounds.

Following a Miami score that tightened the game to 14-7, Allen forced a throw into coverage with 43 seconds remaining in the half, resulting in a pick-six.

Upon analysis, the play before this interception significantly contributed to the interception itself. Buffalo started the drive from its own 25-yard line, with one timeout and 54 seconds remaining. The Bills should have been thinking about preventing catastrophic mistakes prior to halftime. Allen handed the ball to McCoy on a running play to the right and McCoy reversed field as he often does. As Allen recognized that McCoy was coming back his way, he attempted to block Alonso with his right shoulder.

This was an naive move by Allen and one that could have cost the franchise dearly had he seriously injured himself in this unnecessary decision. Alonzo knew Allen was looking for contact and hammered him to the ground. Allen was visibly shaken up. On the next play, he threw the interception that was returned for a touchdown by Miami safety Reshad Jones. 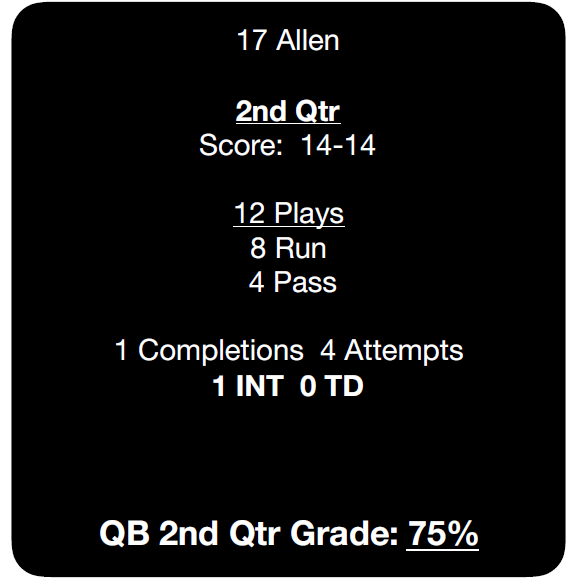 From my experience, utilizing a running play following significant contact to the quarterback is beneficial in these situations, giving the quarterback time to recover. Miami used one of its remaining timeouts with 43 seconds left in the half. The Bills should have run the football again and forced Miami to use their final timeout.

Instead, the decision to throw the football gave the Dolphins an opportunity to disguise an “inverted Cover 2” defensive look whereby Jones was able to fool the shaken-up Allen and “rob” the middle of the field, resulting in the Miami interception.

From a developmental perspective this last 43 seconds of the half might prove to be valuable to Allen going forward. While the amount of heart Allen puts into the game is admirable, there is a lesson to be learned here that a quarterback’s ability to perform and lead is far too valuable to gamble and seeking out head-on collisions with linebackers can have dangerous consequences.

Allen’s sense of self-preservation needs to improve for the sake of his continued well-being as well as for the future of the Buffalo franchise.

Best throw of the day

Allen's most impressive throw came on the Bills’ opening drive of the third quarter. Allen led the offense on a 10-play drive that gave the Bills a 21-14 lead. He delivered an outstanding “back-shoulder” throw to Robert Foster. This was a “fade” route by Foster in which Allen read the Miami defender perfectly. 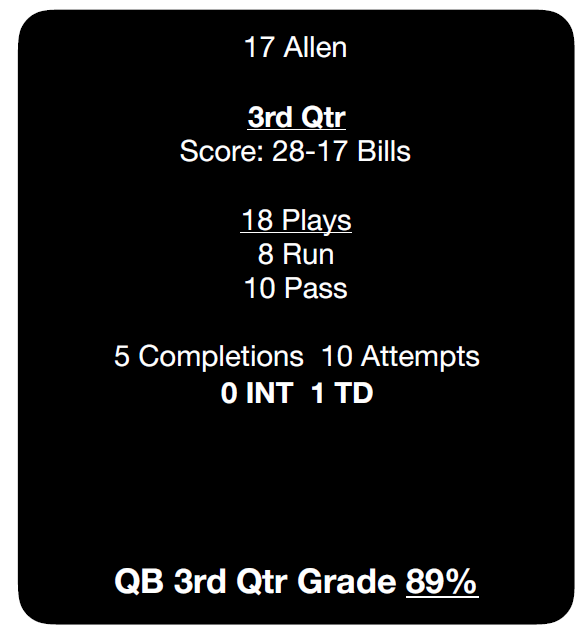 Foster “outside released” cornerback Cornell Armstrong. Allen immediately recognized the defensive back’s relationship to the wide receiver and threw Foster open to the front pylon. This level of execution marks a significant improvement for Allen. He read the defender and attacked the weakness instead of just throwing the ball up on the “fade” route.

Teams and players that master this technique give themselves the ability to be successful on the “fade” no matter what the coverage because they throw the ball away from the defenders’ position. If the defender is “even” with the receiver, the quarterback throws the football “over the top” to the back pylon. If the defender is “upfield” the quarterback throws to the front pylon. This was great recognition, accuracy, and touch by Allen on the go-ahead score.

Allen’s final two scores in the fourth quarter capped off what was his most diverse outing to date as it highlighted his uncanny ability to scramble as well as his improving ability to read coverage.

On first-and-10 from the Dolphins’ 30-yard line, Buffalo was able to pick up Miami’s six-man pressure. Allen scrambled to his right and then took off down the field for a touchdown run. Allen knew Miami was in “man-to-man” coverage down the field and attacked the Dolphins’ weakness on this scramble. 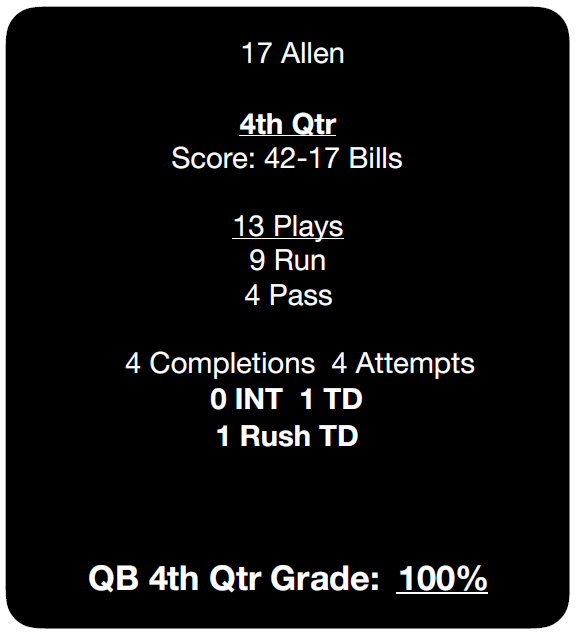 On the next possession, Allen found Zay Jones on another deep crossing route that flooded Miami’s zone coverage. Jones was lined up in the slot to the right of Allen. Two Buffalo wide receivers were on the left. Both ran post patterns that literally “took the top” off the zone coverage.

Allen was watching the defensive backs to that side and knew Jones was coming into the voided areas under the two post routes. This was a classic Daboll packaged concept and one that Allen has been having more and more success with.

Allen read the coverage and delivered a perfect throw to Jones for the 26-yard touchdown.

The most impressive aspect of Allen’s performance was the variety of plays that he made, his game-breaking running ability, and his impressively strong arm. He is now getting comfortable reading defensive technique on fade routes and throwing his wide receivers open. He is beginning to consistently read coverage.

As these qualities continue to come together and grow, Allen has the potential and skill set to become one of the most weaponized quarterbacks the Bills have had since Jim Kelly.