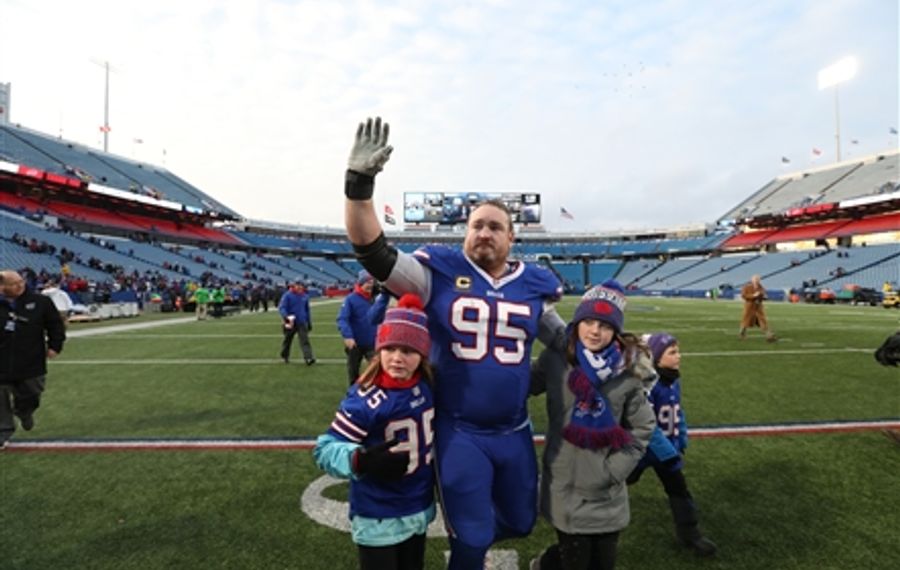 Bills fans bid farewell to an old favorite and celebrated an encouraging effort from the new face of the franchise in Sunday's season finale.

Starting with a tribute to Kyle Williams on the Village of Williamsville sign, the #ThankYourKyle theme continued at New Era Field with the retiring defensive captain contributing on offense, getting a curtain call on the final defensive series, and taking a victory lap around the stadium following Buffalo's 42-17 defeat of the Miami Dolphins.

"Kyle Williams was walking off the field a winner, regardless of the final score," Jason Wolf writes. "Chants of 'Thank you, Kyle' rained from the stands, peppered with homemade signs showing love to the former fifth-round pick turned five-time Pro Bowler, who finished his career right where it started, with the franchise that drafted him out of LSU with the 134th overall selection in 2006."

Williams may have been the featured performer but it was rookie quarterback Josh Allen who put on a show, passing for 224 yards and three touchdowns while running for another 95 yards and two scores. Allen finished the season with a franchise record for rushing yards by a quarterback (580) and matched Jack Kemp's mark for most rushing touchdowns by a QB (eight).

"Now, the Bills have someone around whom they will continue building," Vic Carucci writes. "Allen remains a work in progress, but as he showed Sunday, there is plenty with which to work."

LeSean McCoy vows he'll bounce back: The six-time Pro Bowler closed the most disappointing season of his NFL career with 26 rushing yards and a touchdown on 10 carries to finish with 514 yards and a 3.2-yard average, by far the worst numbers of his 10-year career. "This is not the type of production that I’m used to,” McCoy said. “But it is what it is. I’m tough. I’ll bounce back. I think they’ll make the right moves this offseason and get the right pieces. I’ll be back. This is good for me. This is good for a lot of reasons, one of them is that it puts a chip on my shoulder. I always try to have different goals. I think one of them is to prove myself that I still am who I am.”

Kiko Alonso's late hit on Allen leads to scuffle: The former Bills linebacker dove into Allen as the quarterback was sliding at the end of a scramble. Alonso's leg went backward and hit Allen in the helmet, leading to a flag for a late hit. The Dolphins' Robert Quinn and Bills' Jordan Miller then tangled in the ensuing scuffle with Quinn grabbing at Mills' helmet. Alonso, Quinn and Miller were all ejected. Watch video of the play and read reaction from Bills players and radio broadcaster Mark Kelso here.

Plays that Shaped the Game: The Dolphins learned the danger of blitzing Allen.

Quarterly Report: While Allen dazzled, his Miami counterpart Ryan Tannehill did not.

Looking ahead: The Bills will have a top-10 draft pick, though the exact spot was unclear Sunday night. We do know who Buffalo's 2019 opponents will be.

Today's schedule: BNBlitz.com will have live coverage of locker clean-out, including press conferences with Allen at 1:45, General Manager Brandon Beane at 3 and coach Sean McDermott at 4.