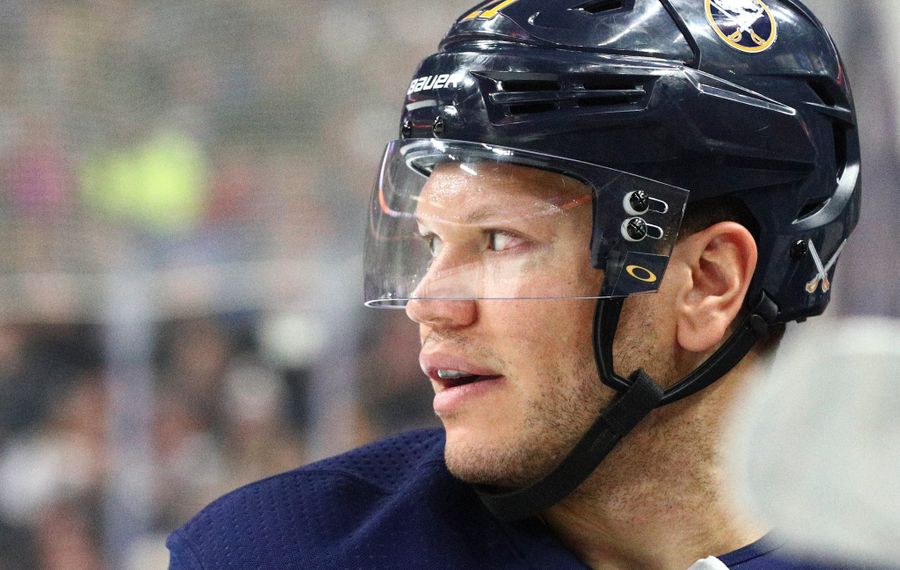 Kyle Okposo was back.

The Buffalo Sabres winger's toe drag and wrist shot to beat Tampa Bay's Louis Domingue for the eventual game-winning goal against Tampa Bay on Nov. 13 appeared to be the latest step in a breakthrough.

It was Okposo's fifth goal in 10 games and put him on pace for his first 20-goal season since he scored 22 for the New York Islanders in 2015-16. After two tumultuous years on and off the ice in Buffalo, the 30-year-old helped revitalize the Sabres with seven points during their 10-game winning streak.

His tenure in Buffalo has since taken another tragic turn. Okposo could be skating on the fourth line with Johan Larsson and Remi Elie when the Sabres host Okposo's former team, the Islanders, Monday in KeyBank Center.

That was Okposo's assignment in practice Sunday after he failed to score a goal for a 21st consecutive game. Coach Phil Housley is hoping a different assignment can spark Okposo, who was supposed to provide secondary scoring behind the Sabres' dynamic top line.

"Everybody knows the production, right?" Housley told reporters when asked about Okposo on Sunday. "You look at the statistics, but I think he just has to get back to work. I wouldn’t read too much into the lines. We’re just trying to create more balance, and I think [Larsson's] played terrific hockey."

Okposo, who had three 20-goal seasons in New York, has five goals among 15 points in 39 games this season, including only one assist in his last 17 games and a minus-7 over his past 11 games. He has provided leadership in the locker room and has served as a mentor to young players, particularly Casey Mittelstadt. But former Sabres General Manager Tim Murray was expecting more when he signed Okposo to a seven-year, $42 million contract in July 2016.

The Sabres need more from Okposo and he knows it. He yelled in frustration following an outstanding second-period shift by his line did not yield a goal Saturday against Boston. This was supposed to be his bounce-back season. After all, the nightmare he and his family endured contributed to struggles on the ice in 2017-18.

In March 2017, a concussion and resulting reaction to medication landed Okposo in Buffalo General Medical Center's neuro intensive care unit. He returned last season to post 44 points in 76 games, his lowest for a full season since he had 39 points as a rookie in 2008-09.

Okposo was a minus-34, the second-worst number in the NHL and worst among forwards. He vowed to improve his skating and to help in the Sabres' turnaround. That's what made the 10-game winning streak such a joyous three weeks for him, particularly his mentoring of young players like Mittelstadt.

"It comes full circle," Okposo told The Buffalo News last month. "It feels like just yesterday I was [Mittelstadt's] age and a rookie. I’m not anymore. It goes by quick. I know everyone says it, whether they’re talking about life or kids or the hockey career. It’s short. It goes by fast. You have to make sure you enjoy every phase of it. I’m really taking some time to enjoy this phase of my career where I still feel like I have a lot of game left to give, but I can give something to these younger guys as well."

Okposo was not made available to reporters after practice Sunday. Instead of promoting a player from Rochester to help with secondary scoring, Housley chose to shuffle his lines again. Evan Rodrigues, who assisted on Larsson's shorthanded goal Saturday and has 10 shots on goal over the past two games, took Okposo's place on the second line.

Housley wants Okposo to act as more of a power forward than a sniper by going hard to the net. It is a role Okposo has seemed uncomfortable filling at times.

"I think he’s really handled it well," Housley said of Okposo. "He’s been providing us with some terrific leadership within our locker room and says a lot of the right things. He gives a lot of feedback to our young players. He represents everything we want as a Buffalo Sabre. It’s one of those things where when you go through a difficult time you have to fight your way through it. There’s no easy recipe for it. It’s keep it simple, go to the net hard, things are going to happen."

The Sabres are in a predicament. Okposo has a modified no-trade clause and there would not be much of a market given he's under contract for four more seasons at a $6 million annual cap hit. That explains why all involved are trying to help him find success.

Okposo is revered in the locker room and works relentlessly at his craft. That explains why defenseman Zach Bogosian chose this response when asked about his fellow alternate captain following Sunday's practice.

"I’m not going to be one to comment on Kyle’s situation," Bogosian said. "Kyle trying to find that offensive side of things. ... As a teammate, you care about all your teammates. You want them to all do well. That’s not saying Kyle hasn’t done other things defensively. He’s a huge part of our team on the ice and in the locker room. He’ll find it. More importantly, through the whole process he’s been a great teammate, great leader and really hasn’t changed his demeanor, especially in the locker room."

Jack Eichel was absent from practice Sunday for "maintenance," according to Housley, but is expected to play Monday against the Islanders. Goalie Linus Ullmark also returned to practice after he was unavailable Saturday because of an illness. As a result, goalie Scott Wedgewood was sent back to Rochester.