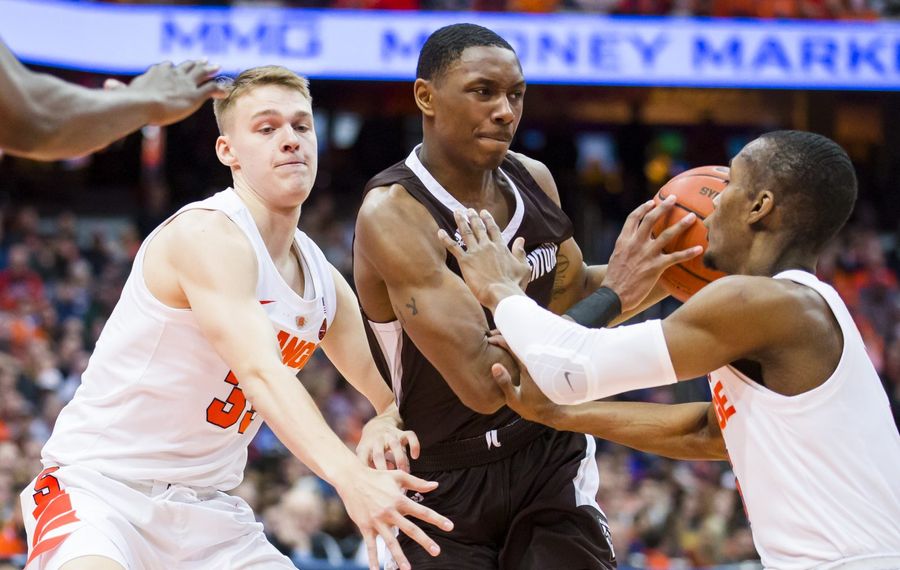 Against Syracuse’s 2-3 zone defense and without Courtney Stockard's inside presence for a better part of the first half, the Bonnies tried to produce some sort of substantial offense. At certain points they forced it, and their panic didn’t amount to much in a 81-47 loss to the Orange on Saturday at the Carrier Dome.

“We just came out flat,” Bonnies guard Kyle Lofton said. “We’re supposed to give the first punch, but we took the first punch. We looked like we didn’t come out ready or prepared.”

“He came out with a first, quick 10 points,” said Lofton, whose team opens its Atlantic 10 schedule Jan. 6 at George Mason. “Players like that, we’ve got to find them, traditionally, and just stop them early.”

Few expected the Bonnies to summon the magic from when they defeated Syracuse 60-57 in overtime in December of 2017 at the Carrier Dome. But few expected that, for separate stretches, the Bonnies weren't able to even summon a successful shot.

The Bonnies finished 8-for-21 from the floor in the first half against Syracuse (9-4) and went without a successful shot for spans of 4:14 and 7:08.

“Everything just looked different than what it really was,” Lofton said of Syracuse’s zone defense. “Spots looked open but you tried to force it in there and they’re long and athletic, so it was harder to find certain spots in the zone.”

Battle paced the Orange in scoring and fueled its transition game. Battle had six of Syracuse's 17 steals, and the Orange scored 20 points off turnovers.

“To play against a Syracuse zone and turn the ball over 25 times, you’re not going to win. That’s the bottom line.”

The Bonnies whittled the lead to 10 at 27-17 on Lofton’s free throws with 8:45 left in the first half, but by then Syracuse had taken Stockard, otherwise Bona’s best option in the middle, out of the equation.

Stockard took his third foul 8:24 into the first half, and the Bonnies’ inside shooting presence was minimal without the senior forward, who entered averaging 19 points in six games.

Stockard finished with a season-low two points in 15 minutes on the floor, and Bona had only 18 points in the paint. The Bonnies entered the game averaging 30.1 points a game in the paint.

“We were just more active,” Syracuse coach Jim Boeheim said. “They (St. Bonaventure) don’t have a real threat inside. That helps us. We were able to stay, get to their perimeter shooters and that was a big part of it.”

“It definitely made it hard for us, because (Courtney) is one of the best players that we have that can work the middle, work the zone, pass and shoot,” Lofton said. “It was hard, but it happens.”

Syracuse’s lead swelled to as many as 30 in the first half and 33 late in the second, before Robert Braswell’s layup with 31 seconds left closed the win for the Orange.

Prior to Saturday, Bona’s largest margin of defeat this season came Nov. 20, when it lost 72-52 to Boise State in the Cayman Islands Classic.

Still, Boeheim wasn’t going to let his team coast or rest with a double-digit lead.

“With 35 minutes to go, 15-point leads can go away in about two minutes,” Boeheim quipped, in reference to his team’s early 17-2 lead.