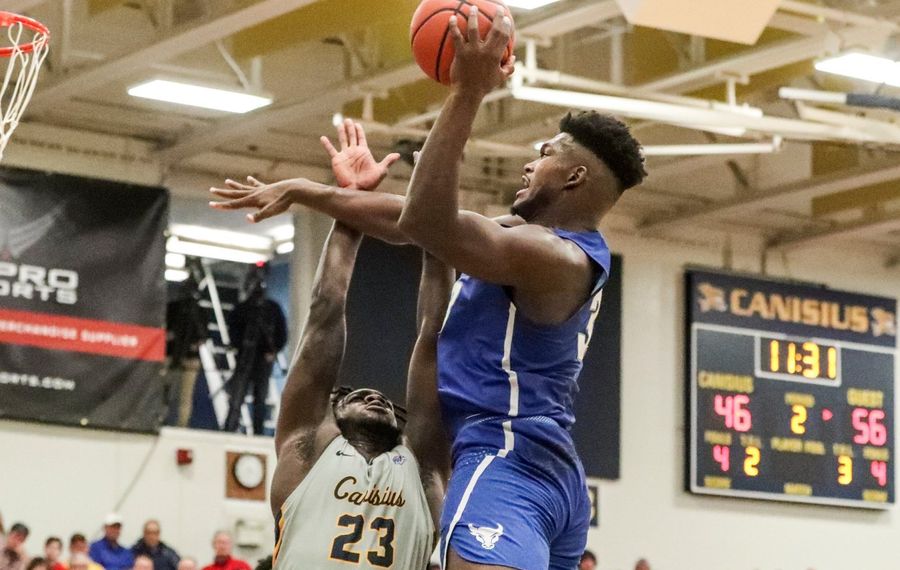 Buffalo needed only about seven minutes to turn an early double-digit deficit into a double-digit lead, storming back to defeat crosstown rival Canisius, 87-72, on Saturday night in its final nonconference game at the sold-out Koessler Athletic Center.

Canisius owned a 23-13 advantage before the No. 21-ranked Bulls erupted with 11 minutes remaining in the first half, scoring 13 consecutive points and continuing on a 24-3 run.

The stretch began with CJ Massinburg, Jeremy Harris and Jayvon Graves hitting 3s, before Massinburg dunked to give UB a 24-23 edge with 9:20 left in first half.

Buffalo led 41-35 at halftime and quickly re-established a double-digit advantage in the second half, leading by as many as 18 points.

Canisius dropped to 3-8, losing its second consecutive game after previously falling at Holy Cross, 65-63, on Dec. 20.

The Griffs used a 14-3 run, fueled by 3-pointers, to establish that advantage.

Jibreel Faulkner, Johnson, Jonathan Sanks and Reese all connected from long range during the stretch. At the time, Canisius had hit 5 of 9 (55.6 percent) from 3-point range.

Another level: Buffalo became the first nationally-ranked team to play a game in the Koessler Athletic Center. Canisius had played all previous ranked opponents downtown. Buffalo and Canisius hadn’t met at the KAC since Nov. 20, 2012, when Canisius won, 71-64.

The Griffs dropped to 1-2 at home this season and to 9-5 all-time against Buffalo on campus. They have lost their last 19 games against ranked opponents.

Quite a run: Buffalo is in the Associated Press Top 25 rankings for the seventh consecutive week, the longest stretch by a MAC team since the 1975-76 season, when Western Michigan spent seven weeks in the Top 25. The last MAC team ranked for eight weeks or longer was Ohio in 1969-70.

Non-conference dominance: Buffalo finished its non-conference schedule with just one loss for the first time since going 10-1 during the 2005-06 season. It’s lone loss during that stretch was against Boston College. That was the last Bulls men’s basketball team to open the season 11-1.

A familiar face: Canisius head coach Reggie Witherspoon was the head coach at Buffalo from 1999 to 2013, when he racked up 198 victories, the second-most in program history. Witherspoon and current UB coach Nate Oats are the only Bulls coaches to be named MAC Coach of the Year.

This was the third time Witherspoon has coached against the Bulls since being named head coach at Canisius on May 28, 2016. The teams split the first two matchups.