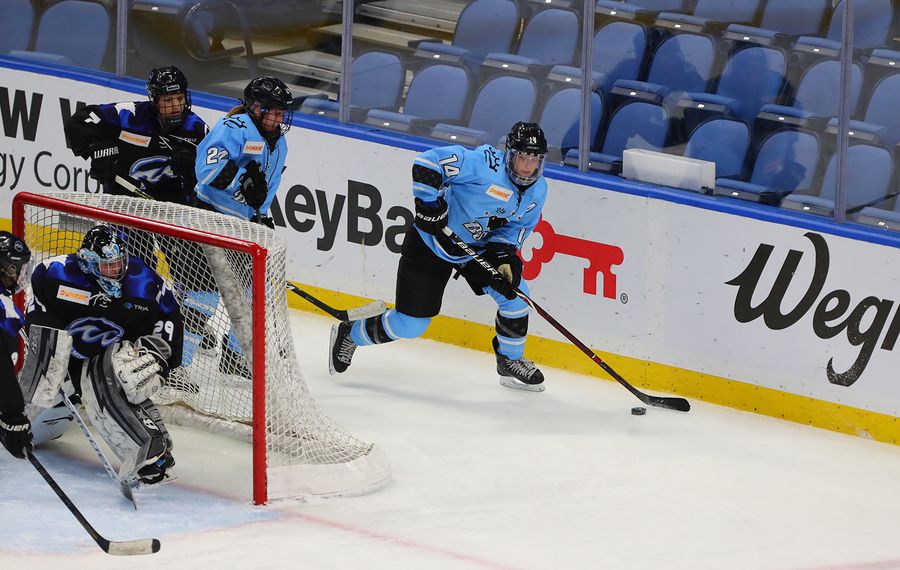 With half of the lower bowl in KeyBank Center filled, each of the Buffalo Beauts raised their sticks high to salute fans late Saturday afternoon. Seven sections in the 100 level were filled. Young children held up signs. Six fans each wore a snuggie with one big white letter on the front, spelling out "B-E-A-U-T-S."

It was the first Beauts game on the Buffalo Sabres' home ice. Though it ended with a 2-1 loss to the NWHL's first-place Minnesota Whitecaps, the Beauts' world-class talent was on full display, including Williamsville native Hayley Scamurra.

Scamurra, a 2013 graduate of Nichols School, did not assist on Blake Bolden's wrist-shot goal 17:43 into the first period, however, Scamurra helped create several scoring chances. Though she was "bummed" by the loss, the team's homecoming was a fine way to end her whirlwind month.

Scamurra, who entered Saturday as the NWHL's leading scorer with 13 points, attended USA Hockey's Women's Winter Training Camp last week in Plymouth, Mich., where she competed alongside some of the world's best for five days.

"It was surreal," Scamurra said. "It was definitely surreal to have the USA gear and everything. It’s something I’ve been working towards for as long as I can remember. It was nice to have it finally realized."

Scamurra earned the invitation after another remarkable performance for the Beauts. Entering Saturday, she was in a five-way tie for the most goals (6) in the league and a four-way tie for most assists (7). She has scored at least one goal in five of eight games this season.

Drafted 10th overall by the Beauts in 2016, Scamurra helped the team win the Isobel Cup the following spring and was named the league's rookie of the year in 2017-18. She was also named co-MVP of the NWHL All-Star Game after scoring three goals in last season's event.

Scamurra, a speech and language pathology graduate student attending the University at Buffalo, had to excuse herself from a clinical lab when she received the phone call offering her a spot on the 44-player camp roster, which was held Dec. 17-21.

"I was ecstatic," she said. "I couldn’t believe it. I was bummed because I was at school. So I couldn’t scream as much as I wanted to, but I was shocked and really happy."

That gave her little time to prepare, however, she joined 22 members of the Gold-winning 2018 roster, including teammates Dani Cameranesi, Emily Pfalzer and Nicole Hensley. There were four days of intrasquad games and practices before Scamurra returned home to prepare for the Beauts' first game in three weeks.

That long break, as well as a midseason coaching change, did not slow the Beauts against Minnesota. They outshot the Whitecaps, 34-27, and took a 1-0 lead on Bolden's shorthanded goal, which was assisted by Corinne Buie and Eden native Julianna Iafallo.

But Kendall Coyne Schofield tied the game in the second period and Minnesota won the game when Lee Stecklein scored with 1:18 remaining in regulation. It was coach Cody McCormick's first game since taking over for Ric Seiling, who was fired Dec. 7.

The Beauts fell to 4-4 and have eight regular-season games remaining, beginning with a rematch Sunday against Minnesota in HarborCenter. All the while, Scamurra is waiting to hear back from Team USA coach Bob Corkum, who will deliver a camp evaluation following the New Year.

"I try not to think about it too much," Scamurra said with a laugh. "I try to have a positive outlook. I had a good experience. Whatever happens, happens. We’ll see."

When the Buffalo Beauts look for players, they start close to home