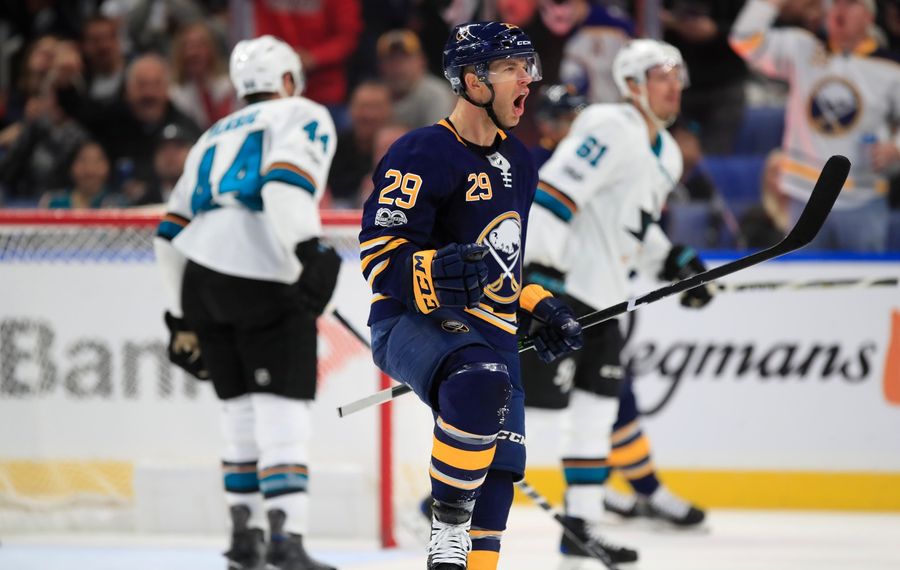 When the Buffalo Sabres returned to practice Friday, they were joined by one player who could provide the secondary scoring they have lacked since their 10-game winning streak ended nearly a month ago.

Jason Pominville, who has missed three games since colliding with defenseman Rasmus Ristolainen during the third period of a 5-2 loss to Florida on Dec. 18, practiced Friday at HarborCenter and could play Saturday night against the Boston Bruins.

Though Pominville participated in line rushes during practice, coach Phil Housley would not commit on the possibility of the 36-year-old winger returning against the Bruins. Additionally, Ristolainen and winger Zemgus Girgensons missed practice for "maintenance," while emergency goalie Ryan Vinz joined the team because Linus Ullmark is ill.

"It’s tough because with our schedule we haven’t had a lot of practice time coming off the break," Housley said in KeyBank Center. "[Pominville] had a good practice today. I liked the way he responded out there, so he could be a possibility to play tomorrow. ...  I liked what he brought to practice today."

Pominville, who also missed two games because of injury earlier this month, has nine goals among 18 points in 33 games this season. However, he has averaged only 12:09 of ice time while being without a goal over his past 13 games.

If Housley's practice lines were any indication, Pominville will skate with Vladimir Sobotka and Tage Thompson against the Bruins.

"I feel ready," Pominville said. "I haven't gotten confirmation about anything, but the way the lines were set up today, I would expect to be playing. I've been able to skate and stay active."

The Sabres are in desperate need of secondary scoring, particularly at even strength. Jack Eichel, Jeff Skinner and Sam Reinhart have combined for 16 goals during 5-on-5 play over the past 13 games, while the rest of the team has only eight. Pominville has struggled to produce since being bumped down from Eichel's line, but he presents an upgrade over Remi Elie, who skated on the Sabres' second line in a 4-1 loss in St. Louis on Thursday night.

Ristolainen played 20:56 against the Blues and led the Sabres with 24 total shifts, but he previously has missed practice for "maintenance." Housley might have opted to rest Ristolainen since Buffalo now has eight healthy defensemen, including Nathan Beaulieu and Matt Hunwick.

Girgensons was a minus-1 in 14:03 against the Blues, but he and Johan Larsson have accounted for four of those 5-on-5 goals by players not on the top line. Ullmark, meanwhile, did not participate in the morning skate prior to the Dec. 18 loss to Florida because of an illness but returned that night to serve as Carter Hutton's backup.

Winger Scott Wilson also returned to practice with the Sabres and is getting close to game action, Housley said. Wilson, who was acquired from Detroit last December, has not played in the regular season after undergoing surgery to repair a broken ankle Oct.2.

Wilson was an extra during line rushes Friday, but he was the first on the ice at HarborCenter and participated in other drills. The 26-year-old had six goals among 14 points and a minus-17 rating in 49 games for Buffalo last season.

"He's getting there," Housley said of Wilson. "He’s been out a long time, so slowly get him progressed in our practices. Again, we haven’t had a lot of quality practice time. We should be able to do that as we move through our schedule, but I like how he’s getting close and he’s getting ready. It’s good to see him out there."

Bruins coach Bruce Cassidy told reporters Friday that winger Brad Marchand is unlikely to play against the Sabres and defenseman Charlie McAvoy has been ruled out.

Marchand, who has 12 goals among 41 points in 38 games, suffered an upper-body injury Thursday against New Jersey. Cassidy said Marchand was also not feeling well entering that 5-2 loss to the Devils.

McAvoy did not play against New Jersey and was placed on injured reserve Friday with a lower-body injury. Winger Patrice Bergeron, defenseman Zdeno Chara and defenseman Kevan Miller have recently returned from injuries for Boston, which is three points behind Buffalo for third place in the Atlantic Division.