A former Buffalo Bills official is behind a new half-hour reality show with multiple Buffalo ties that is scheduled to premiere at 9 p.m. Friday on ESPN2.

Marc Honan, the former senior vice president of marketing and broadcasting for the Bills who later transferred to Pegula Sports and Entertainment, has been working on the program, “Gymratts,” since he left the Bills more than a year ago after 20 years working in some capacity with the National Football League team.

He described “Gymratts” as a show “that will travel to the most unique and outrageous gyms and fitness events on the planet."

“When I left the Bills in October of 2017, my goal was to do something on more of a national scale," said Honan. "Gymratts’ gives me an opportunity to create unique and interesting programming, develop a new brand and work with some great people in the entertainment and fitness business.”

“After 20 years it was time for a change. I had the opportunity to work with so many talented and wonderful people. Now as a fan, it’s been fun to watch them grow as a young team (except for Kyle Williams, who is really old).”

Honan said the crew working on “Gymratts” is based in Buffalo. It is assembled and edited at DPost and most of the equipment is sourced from Squeaky Wheel. Both are located on Main Street in Buffalo. 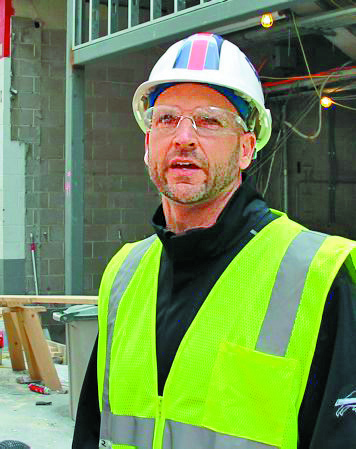 He added that “Scuffed Up,” a Buffalo-based company, makes two products that will be promoted on the show – a sneaker cleaner and a gym bag deodorizer. Additionally, Elmhurst, makers of a protein shake, is located in Elma and sells nut-based protein drinks for fitness enthusiasts and people focused on a healthy lifestyle.

The host of the show is Josh Goldstein, better known known as Farb, who Honan said “has gained popularity on social media (Instagram) for his fitness exploits and engaging personality. He is a veteran of CrossFit, a qualifier in the Strongman Nationals and a member at the legendary Deuces Gym in Los Angeles.”

The first of two episodes that ESPN has commissioned is shot at Poe’s Gym in Nashville, Tenn. Honan said the exploits of the gym owner, Matt Poe, are featured on the internet.

The first episode includes a segment, titled “Gym Shorts,” that profiles Lumber City CrossFit in North Tonawanda. It was the gym where a test pilot was shot that led to the deal with ESPN.

“The owners, a brother-sister team (Jen Lezniak and Matt Douglas) were great to work with and helped secure some great footage,” said Honan. “We actually received multiple offers from programmers, but I believe the ESPN offer provided us the best chance for success.”

He said the second show will feature the strength and conditioning program at a major college. He is hoping those two episodes will lead to a commitment to a full season of shows in 2019.

“Gymratts” will have multiple airings on ESPN, ESPN 2 and ESPN U after Friday’s premiere.