Kohinoor Kahn expected her Boxing Day shift at Walden Galleria to be hectic Wednesday, but she didn’t expect to end the evening locked inside the back room of the clothing store, hiding from what she believed to be gunshots.

Lindsay DeDario was shopping in Park Avenue Coat Co. when she heard screaming and saw crowds frantically fleeing. Assuming there was an active shooter, she rushed through an emergency exit and ducked behind cars.

Responding to reports of multiple fights and a shopper with a gun in his or her waistband, police at Walden Galleria heard a metal sign fall and mistook the banging sound for a gunshot. Officers called it in, and police agencies responded to the mall from across Erie County.

There were fights inside the mall, but no injuries reported or weapons recovered.

But as a result of Wednesday night's chaos – some of it captured on video by bystanders – Cheektowaga Police more than tripled the number of officers it had at the mall Thursday night.

"We have a problem that needs addressing," Chief David J. Zack told reporters during an afternoon news conference Thursday.

So what's being done?

Still, mall employees and shoppers want to know how Walden Galleria management allowed things on one of the busiest shopping days of the year to get so out of hand in the first place.

Mall owner Pyramid Management Group did not answer questions Thursday and released only a prepared statement.

"Safety is and remains our highest priority at Walden Galleria," the Pyramid statement read. "The incidents that took place between disorderly youth acquaintances are absolutely unacceptable."

Wednesday night’s commotion began with a call about a fight in the mall’s food court at about 6 p.m. Police found no one fighting, but dispersed two groups that were arguing.

During the evening, there were 22 calls for fights, but police believe they received multiple calls for the same incidents. The largest fight may have involved as many as 10 individuals.

Galleria workers said they always expect the day after Christmas to be hectic, and were surprised mall management wasn't prepared to handle it.

"Everyone is out of school, everyone has their gift cards to spend, what did they think was going to happen?” said Morgan Smykowski of Darien, who works in a clothing store at the mall.

She and other employees said the mall needs to do a better job with security, especially during school breaks and on days that are likely to draw a lot of teenagers.

The Walden Galleria has what it calls an MB-18 policy in effect from 4 p.m. to closing on Friday and Saturday nights, requiring shoppers under 18 to be accompanied by an escort age 21 or older. That policy was not in effect Wednesday or Thursday nights, according to the mall security office. Cheektowaga Police officials said they are in discussions with Galleria officials about possibly enacting the chaperone rule year-round, but that decision is up to the mall's management.

Walden Galleria said in a statement there would be an increased security and police presence at the mall through the holiday season, but that was not highly visible Thursday morning or afternoon, except for a mall staff vehicle and Cheektowaga police vehicle alternately parked outside near Forever 21.

Mall employees said they would like to see the mall beef up its security, communicate better with retailers and expand and enforce its teen chaperone policy.

Walden Galleria often asks for police assistance during busy shopping times, said Cheektowaga Police Chief Zack. The number of police working at the mall is determined through negotiations with Pyramid, a private business, he said. The mall also decides how much it wants to pay for those services, Zack said.

“We do not have the authority to impose anything on the Walden Galleria,” he said.

Zack said there are discussions about expanding the mall’s parental escort policy for those under 18 who are in the mall during evenings.

He said the mall’s owners, Pyramid Management Group, also might want to redevelop its relationship with anti-violence groups who’ve helped with peacekeeping at the mall in the past.

“Obviously this incident is a wake-up call that those solutions that were productive in the past have to be revisited again,” Zack said. “There seems to be a willingness by them to do that.”

Buffalo Peacemakers, an anti-violence group that works with young people, was expected to be at the Galleria on Thursday night. 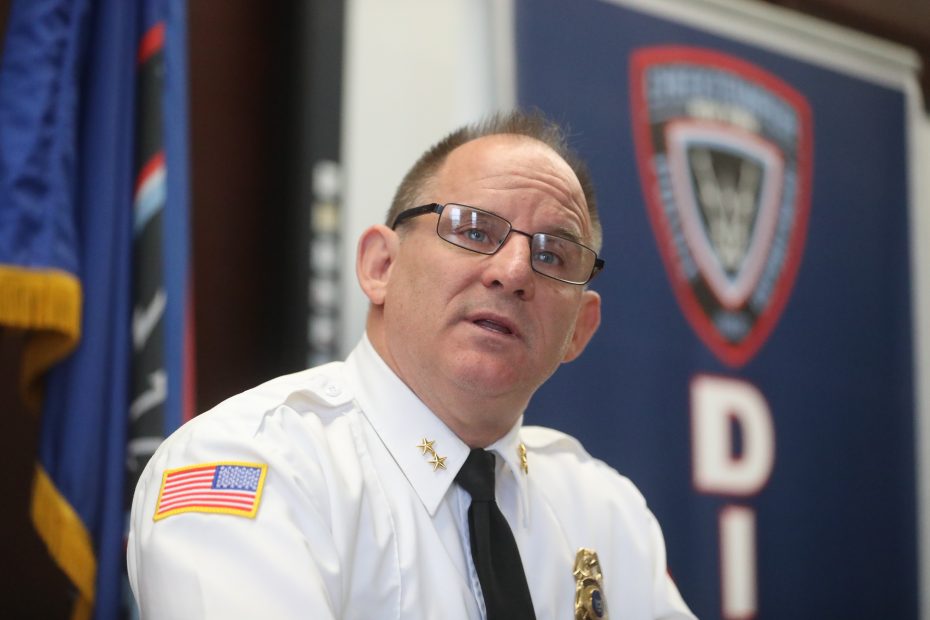 “We’re there constantly trying to prepare them for an event that we almost thought we had," Zack said.

Zack was not sure how or if the mall management communicated with its tenants during the incident, but said that aspect would be investigated as part of its post-action report.

"It's something we need to trace back. Was there an announcement made? How was everyone notified? Or did people just start shutting it down on their own?" Zack said. "Word spread like wildfire, so we know gates started crashing down."

The gate at Kahn's store folds into the wall and can be difficult to close. Thinking her life was in danger, she and other employees deviated from the active-shooter drills they had practiced in the past and locked themselves in a back room along with some customers. Early reports of looting turned out to be unfounded, but police confirmed Kahn's story that some expensive handbags were stolen.

"Everything goes out the window when you think someone is shooting at you,” Kahn said.

And even the best planning is no match for such large, unruly crowds, Zack said. The mall is visited by 18 million people a year, and has more than 20 entrances.

"You just have to control it and direct it as well as you can. There's no plan that you can put in place to stop that, plus the thousands of people who leave at the same time because they think shots were fired," he said. "There's no game plan for that."

Wednesday's incident comes at a time when enclosed shopping malls have already lost vast numbers of shoppers to online retailers and open-air strip plazas or "power centers." Though Walden Galleria has fared much better than the region's other malls, some shoppers said the incident was enough to make them avoid Walden Galleria after dark. Others said they would never return.

"It made me think about what a big, easy target the mall can be," DeDario said.

Mary Bamrick was at Walden Galleria Thursday morning. She usually shops online, but had to return some Christmas gifts. After what happened, she said she would be unlikely to visit the Galleria at night, and possibly wouldn't come back at all.

"I hardly come here anyway. If I can't go here at night, people work during the day, why would I come at all?" Bamrick said.