There was a lot to like about the Buffalo Niagara economy in 2018.

Unemployment fell to a modern-era low below 4 percent, causing businesses to scramble to fill open positions and putting a damper on growth at some worker-starved firms. Some local economists think the shortage of workers – and Buffalo Niagara's stagnant population – is keeping the region from creating all the new jobs it could.

But there still were some setbacks. Tops Markets went through a bankruptcy reorganization. Local malls and shopping centers were squeezed by the demise of big-box retailers, like Bon-Ton and Toys R Us, along with the struggles of Sears and Kmart.

Even so, it was a very good year for a region that long has struggled, even if the growth here wasn't as robust as it was in other parts of the country.

You’d have to go back almost 30 years – and possibly longer – before you’d find a job market that was tighter than it is now. After more than eight years of slow, but steady hiring in a region where the population is stagnant, the pool of people who are actively looking for work has dwindled.

You see proof in all the help wanted signs hanging outside local businesses now that the local unemployment rate has dipped below 4 percent – its lowest since at least 1990. And while companies scramble to find workers, it hasn’t translated into a broad-based increase in wages, although there are signs that pay has started to pick up this year.

The tight labor market has spawned efforts to train workers who lack the skills to fill today’s open positions. But it also shows how the region’s population needs to grow for Buffalo Niagara to meet its full economic potential.

The supermarket chain had a roller-coaster year. After a leveraged buyout left it saddled with a suffocating amount of debt – in large part because its former owners borrowed more than $300 million to pay themselves dividends – Tops filed for a Chapter 11 bankruptcy reorganization in February.

Tops used the bankruptcy to strike important deals with its main unions to eliminate big pension obligations and reduce the pension payments that many workers will receive. It renegotiated leases with its landlords and closed 10 of its weakest stores. And it rankled workers by paying $7 million in bonuses to more than 100 managers.

But Tops emerged from bankruptcy in November, with a reduced debt load that still will require $55 million in annual interest payments, leaving the chain on a financial tightrope.

It's official: Tops Markets is out of bankruptcy

New Era has built a reputation as a hometown company that makes hats for customers including Major League Baseball.

But the company threw the region a curve ball when it announced in November that it would close its manufacturing plant in Derby, eliminating more than 200 jobs. New Era will keep its downtown headquarters, but will shift its local manufacturing overseas and to a location in Miami, Fla. 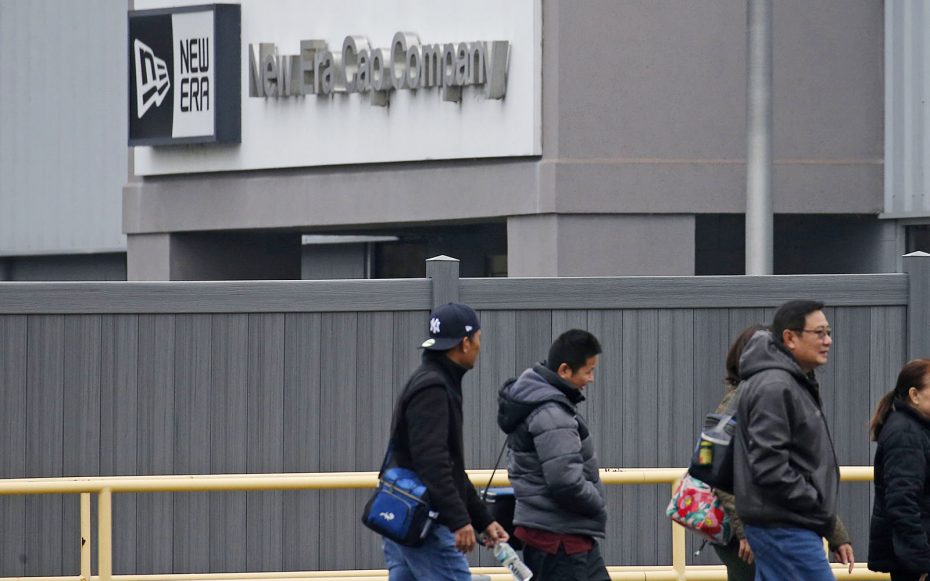 Shortly after the New Era Cap location in Derby informed that they will probably be closing their workplace in March 2019, employees leave the facility on Tuesday, Nov. 13, 2018. (Robert Kirkham/Buffalo News)

New Era officials said the planned shutdown stems from a "pivot" in its business model, from manufacturing to a lifestyle brand. The company's decision was criticized for removing production from the region where the company was born, especially after New Era paid for the naming rights to the Buffalo Bills' stadium.

As New Era gives official plant-closing notice, other companies are hopeful to hire

With low mortgage rates allowing buyers to afford more expensive houses, and a shortage of sellers after eight years of economic expansion, the Buffalo Niagara housing market was hotter than ever this year.

With houses in short supply, bidding wars for prime homes in prime locations weren’t unusual. The median sale price of local homes – meaning half sold for more and half sold for less – reached new heights, topping $150,000 beginning in the spring.

But as mortgage rates crept higher, there were signs this fall that the market was cooling a little as the seasonal winter slowdown settled in, the imbalance between supply and demand remained firmly in place.

J.P. and Ulla Bak founded Bak USA four years ago with the best of intentions: create a socially responsible business that employs disadvantaged workers to make tablet and laptop computers in a downtrodden part of the city.

For a while it worked. Billionaire B. Thomas Golisano invested millions in the venture, allowing it to grow to more than 100 employees. But the Golisano money ran out, new tariffs made its Chinese-made components more expensive and Bak’s sales couldn’t sustain the business. It closed in November.

The Buffalo Niagara market said goodbye to Bon-Ton Stores, Toys R Us and saw all but one of its Sears department stores.

Bon-Ton, which took over AM&As in 1994, struggled for years before falling into bankruptcy and closing its eight remaining stores this year.

Toys R Us sold its last Barbies and Legos in June. A leveraged buyout had left Toys R Us with $5 billion in unmanageable debt, leading the company to file for bankruptcy. Its plans to stay open were thwarted by poor holiday sales.

Sears, which has closed a slew of stores and filed bankruptcy, announced it will close all but one of its stores in Western New York. The only store left remains at the McKinley Mall. Kmart locations in Batavia, Niagara Falls and West Seneca also are closing. Bankruptcy papers showed that the McKinley Mall Sears, along with Kmart locations in Jamestown, Wellsville and on Hertel Avenue remain under consideration for closure.

CCS Oncology once was one of the region's largest private cancer practices. But CCS quickly crumbled amid a flurry of allegations by health regulators and former patients of inadequate treatment and an investigation by federal authorities into whether CCS defrauded taxpayers out of millions of dollars a year.

CCS had struggled financially since 2016, when Independent Health announced it was removing CCS Oncology from its network. The FBI in March raided CCS locations, seizing reams of financial and other information as part of an investigation into possible Medicare. On April 2, CCS filed for Chapter 11 bankruptcy, and weeks later the practice shuttered its doors.

The state Health Department later charged Dr. W. Sam Yi, the former president of CCS, with gross negligence and incompetence in his treatment of seven patients, including six who died.

Financially battered CCS Oncology tells patients it will shut down

The son and nephew of Rochester real estate executive Robert C. Morgan, along with two Buffalo-based mortgage brokers, were indicted in May on charges of mortgage fraud for providing false or misleading information to lenders to deceive them into extending larger loans on apartment complexes than the lenders would otherwise have done. All four pleaded not guilty, and are awaiting trial.

The indictments came nine months after The Buffalo News first reported that the FBI and U.S. Attorney’s Office were investigating Morgan's companies, which own 36,000 apartments in 14 states, including several thousand in Buffalo.

Authorities said the investigation is continuing. Morgan's companies had partnered with TM Montante Development on the reuse of the former Millard Fillmore Gates Circle Hospital property, but that project has been delayed as Montante works to buy out the Morgan interests.

The Northland Workforce Training Center opened its doors in Buffalo.

The $60 million project revitalized a hulking, vacant former manufacturing complex on Northland Avenue, on the East Side. Second, the Buffalo Billion project has created a hub to train workers for manufacturing jobs, at a time when manufacturers are clamoring for more qualified candidates.

While training sessions are underway, there is more to come at the center. Insyte Consulting and Buffalo Manufacturing Works are scheduled to move in during 2019, as part of the $33.5 million next phase.

Developers William Paladino and Nick Sinatra are moving forward on their $100 million redevelopment of the former Women & Children’s Hospital site in the Elmwood Village, gaining approval for the first component while releasing further details of their plans for the rest of the 8-acre campus.

Plans call for converting the 600,000-square-foot complex into a residential, retail and commercial community, with more than 220 apartments, 27 condominiums, 22 town houses, a 75-room hotel, an urban grocery, boutique shops, office space and an EduKids day care center. Most of the housing will be market-rate or luxury, but the developers are committed to making about 20 percent of the apartments affordable to those earning 80 percent of the area median income.

Most of the existing hospital buildings would be retained and reused, while two buildings would be expanded. The first component – a five-story building to be built at the corner of Elmwood Avenue and Bryant Street – has been approved by the city, and some first-floor retail tenants have been lined up. The entire project is expected to take up to five years to complete, through 2022.