I got some pushback over the past few days, which isn’t unusual, considering that I get paid to share my opinions on music several times a week. But this took a form that I found  sinister, for it was pushing me to  write off an entire genre of music.

A perfect storm set it off, as a column I penned looking back on the defining moments in music over the past year hit the ether at the same time as my subjective analysis of the Rock and Roll Hall of Fame’s 2019 induction class announcement.

The “year in review” feature opined that the success of Buffalo hip-hop collective Griselda Records represented the local break-out success story of the year. The Rock Hall piece in part praised the inclusion of Janet Jackson in this year’s class, which triggered a few readers to remember columns I’ve written in the past proclaiming that hip-hop most definitely belongs in the Rock Hall. I’ll let you draw your own conclusions on why some folks saw connective tissue here.

I planned to simply blow all of this off, even though some of the language chosen by letter writers mortified by what they viewed as my treasonous opinions made my blood boil and my faith in the goodness of humanity temporarily wither.

But then Vladimir Putin threw his hat into the ring.

“Rap (rests on) three pillars: sex, drugs and protests. They are the route to a nation’s degradation,” the Russian president said in a live broadcast, before going on to suggest that his government should “take charge” of the genre.

If a strong argument supporting the idea that hip-hop belongs in the Rock Hall – that it has indeed taken over the socio-political commentary, the spirited irreverence, and the air of zeitgeist-capturing protest that was once the purview of rock music – was necessary, well, Putin just fulfilled that need and then some.

In today’s Russia – described by one Russian citizen on the question-and-answer website Quora as “a mix of mafia state, democracy, feudalism and dictatorship” – rap and hip-hop have grown immensely popular over the past few years. Putin’s government has taken note, and now, authorities are routinely shutting down concerts. Husky, one of a new generation of young Russian rappers known for sticking it to the man, lyrically speaking, recently had one of his shows cancelled. He responded by performing on the roof of a car in the street adjacent to the venue. For this, he was sentenced to 12 days in jail for “hooliganism.”

That’s about as rock ‘n’ roll as it gets, folks. The dude went to jail for his art. 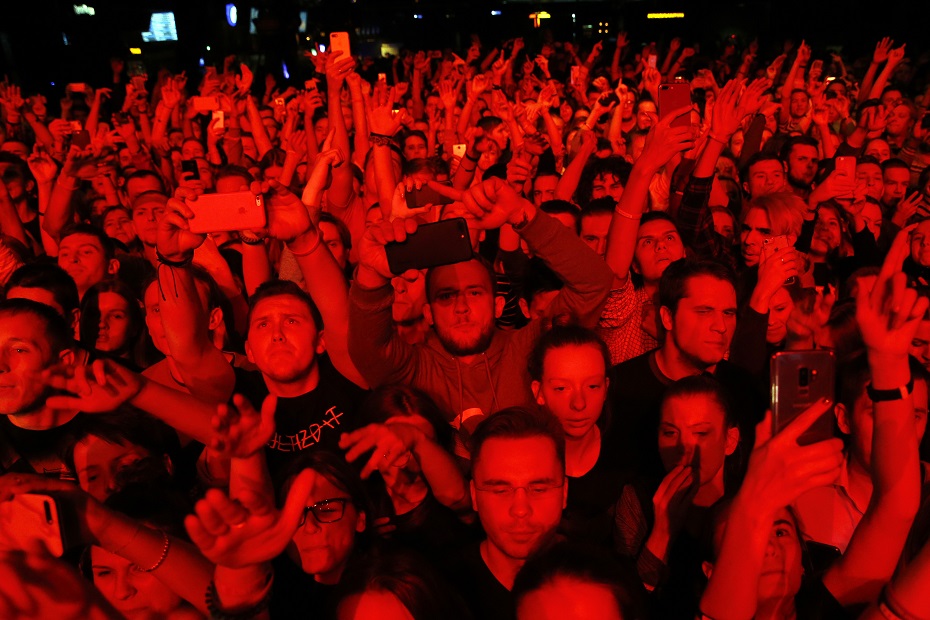 Russian rap fans gather at a Moscow club for a concert protesting the recent crackdown on hip-hop artists by Russian authorities. (Getty Images)

“Artists are blamed for society’s problems because that is easier than addressing the (actual) problems,” Russian rapper Oxxxymiron said, via Instagram, in defense of Husky. Yep. Just like long-haired rockers were once blamed for breaking the stranglehold of white, conservative American values.

It’s not news that hip-hop is the greatest commercial force in the contemporary music industry. This is not why I like a lot of it. In fact, I like a lot of it despite its commercial prowess. If one listens to the best hip-hop, it’s not at all difficult to hear a natural outgrowth of the blues, soul, funk, jazz, R&B, various dance musics and the influence of European minimalism in its smoldering gumbo of sound.  It’s fascinating and funky stuff even before you begin to dissect the street poetry and rhythmic sparring that is delivered by the text. Is it all good? Obviously not. Is all rock music good? Just as obviously not. When a genre becomes commercially powerful, the floodgates open, band-wagoners rush in, fools freely tread, and the ideas are whittled down to their lowest common denominator. But the best of the form retains its edge and urgency.

That urgency is badly needed in modern music. It belongs in the Rock Hall, it belongs in repressive socio-political environments and, if you’re going to consider yourself an open-minded music lover, it belongs in your record collection.