The call from the hospital jolted Henry Kostrzewa's sister. Erie County Medical Center was going to discharge the 52-year-old disabled welder and she needed to help him pick a nursing home.

The clock was ticking.

Kostrzewa had been informed he could end up personally responsible for his hospital bills because he had been "medically cleared" to move into a nursing home.

Roberta Novack told her younger brother not to sign anything. She feared he would end up in a facility unable to provide quality care for the bone infection in his spine that had kept him bedridden for months following a hip replacement surgery.

Kostrzewa and his sister faced the same scramble as many other families. The sudden switch from a hospital to a nursing home is common, but often takes those involved by surprise.

In as little as 24 hours, loved ones who often have no experience with nursing homes must pick one, according to Roxanne Sorensen, the owner of Elder Care Solutions in Amherst, which assists families in finding care.

"It is complex, not cut and dry. You can't pick a name out of the hat and place the person there," Sorensen said.

The key for families to avoid an emotional and uninformed decision is to take action ahead of time, when a relative's health starts to decline, she said.

"There is nothing worse than being blindsided and told that your mother is going to a nursing home and you have no options,” Sorensen said.

When Kostrzewa left ECMC in July, his sister was told there were just three choices. Two had the lowest ratings in the federal government’s assessment. The other had the second lowest rating.

“I picked the best of the worst,” Novack said.

There are 47 nursing homes in Erie and Niagara counties. State and federal reports show they differ greatly in the quality of care they provide.

Staffing levels, health inspections and whether a facility has been fined for conditions that could harm residents are all public information and easily accessible through the federal Nursing Home Compare website that rates nursing homes. But many families don’t have the information at the very moment they need it most.

For Novack, the sudden decision in July was overwhelming.

A few weeks earlier, she had called 911 requesting an ambulance to remove her brother from Niagara Rehabilitation and Nursing Center in Niagara Falls. He had been there for about nine months, following hip replacement surgery. The stay at Niagara Rehabilitation was supposed to have been short, but he got a bone infection in his spine and his weight dropped from 235 pounds to 135 pounds. 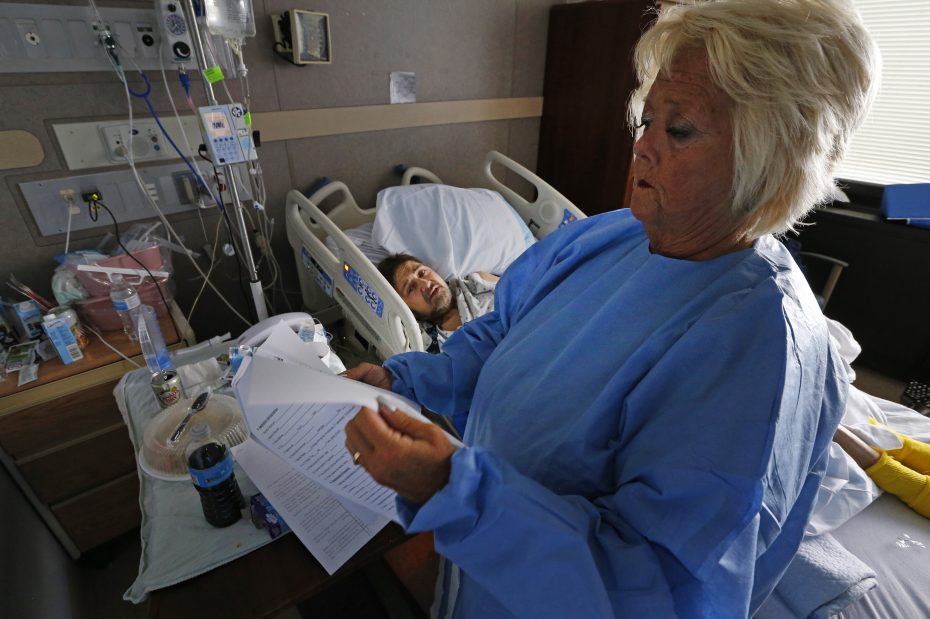 Roberta Novack reads a list of nursing and rehabilitation facilities that may have a bed for her brother, Henry Kostrzewa. (Robert Kirkham/Buffalo News)

At ECMC, Novack pored over paperwork. Her brother’s once-strong legs were frail. She helped him sip juice through a straw and adjusted his blankets. She had arrived at ECMC right after she finished work July 24.

"I can't take off from work to meet with the hospital during work hours,” said Novack, her work clothes covered in a blue hospital gown to protect her brother. “It's so confusing.”

She said she was afraid he’d wind up in another nursing home that provided a low quality of care.

"The hospital discharge planner said they had notified nursing homes of his planned discharge and some of the homes that thought they might take him came in and looked at him," Novack said. "He was rejected because he was on Medicaid insurance and they had also looked at his physical condition. Only three homes would accept him."

Kostrzewa had no savings and little negotiating power. Despite her brother having spent nine months at Niagara Rehabilitation, Novack said she had not been aware there was a nursing home rating system.

Novack learned of it when, in desperation, she called the regional Long-Term Care Ombudsman Program for nursing homes, looking for help. Susan Fenster, a program official, told her about the Nursing Home Compare website and its rating system. Facilities with five stars are the highest rated, while homes with one star are the lowest rated.

There are 24 five- or four-star rated nursing homes in Erie and Niagara counties. None of them offered Kostrzewa a bed.

Novack looked up the ratings for the three nursing homes willing to take her brother. "The highest one had a two-star rating," Novack said.

On July 28, four days after Novack got the call, Kostrzewa was admitted to the Buffalo Center for Rehabilitation and Nursing, a facility at Delaware Avenue and West Utica whose overall rating has since dropped to one star.

Elder care advocates say there are steps families can take to make a decision easier. They recommend planning well before the decision becomes pressing.

"We're in the mentality that it is not going to happen to me. But take a moment and look and educate yourself," Sorensen said.

Visiting nursing homes ahead of time to check if they are clean, provide activities for residents and have adequate staff are some of the advance steps families can take, according to advocates.

Individuals with savings of more than $50,000, she said, can use that as a bargaining chip to be admitted to a nursing home with a high rating in the federal government's five-star system.

Under state and federal regulations, nursing homes are not allowed to discriminate against residents based on their payment source.

But The Buffalo News could not determine if the regulation is enforced by the state Health Department. When asked for examples of enforcement, Health Department spokesman Jeff Hammond issued a statement but no examples: "The New York State Department of Health prohibits discrimination based on a nursing home resident’s diagnosis, severity of condition, or payment source under federal and state regulations."

At Erie County Medical Center, where two-thirds of its patients are insured through Medicaid or Medicare, officials say it can be challenging to place those individuals in nursing homes.

"If the nursing home has a lot of open beds, they will open up the criteria for taking patients,” said Becky DelPrince, the hospital's vice president of systems and integrated care, which oversees discharge planning.  “If they don’t have a lot of open beds, they tighten the criteria and it could take months to place someone, especially if there are behavioral issues, expensive medications or medical needs.”

Nursing homes, she said, are under no obligation to explain why they do not accept certain patients.

"We are at the mercy of the nursing homes," DelPrince said.

Kostrzewa said it was important to have his sister as his advocate. He credited her with saving his life by calling 911 when his infection worsened during his first nursing home stay. He also expressed his hope to regain his health and lead a normal life.

"I want to go home and be able to take my dog Precious for a walk," he said. To date, that has not happened.

On Aug. 4, Kostrzewa was readmitted to ECMC because of difficulty breathing, swelling to his back and an infection. He was placed on a ventilator to help him breathe and a feeding tube was inserted through his nose to his stomach, his sister said.

On Oct. 16, he was discharged to Schofield Residence, a nursing home in the Town of Tonawanda with an overall four-star rating, or "above average." 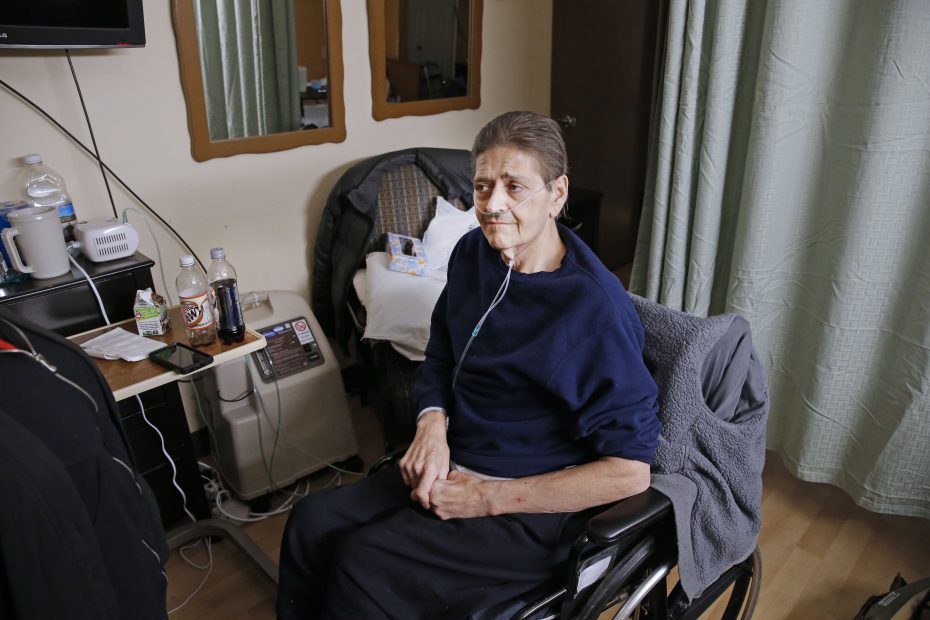 Henry Kostrzewa is finally able to sit in a wheel chair at the Schofield Residence in Tonawanda in December. (Robert Kirkham/Buffalo News)

Novack credits her brother's admission into a better-rated nursing home to the hard stance she took.

"I refused to take anything but a five-star or maybe a four-star home. He’d been in the worst ones and I was not going to let that happen again," Novack said.

She also credited Fenster from the Ombudsman Program for encouraging her to be persistent and not give up.

"Henry is still a mess," Novack said, "but the home he is at is better than the other ones."

How to select a quality nursing home