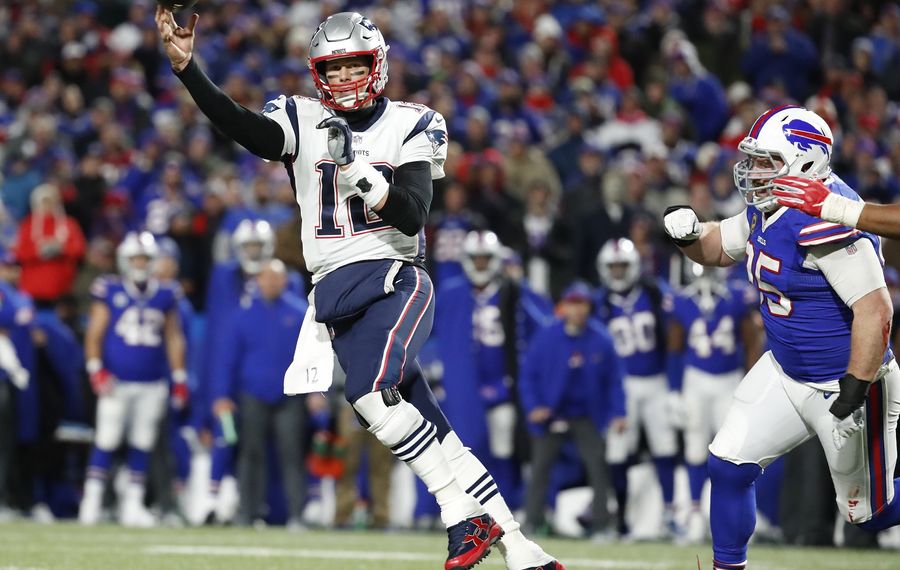 Everything you need to know, plus what I’ll be watching for Sunday when the Buffalo Bills visit the New England Patriots.

Point spread: The Bills are 13.5-point underdogs at footballlocks.com.

Did you know? In the past five seasons, the Patriots have lost just six home games, but two of them have been against the Bills. Of course, those games come with asterisks in that Tom Brady didn’t play the second half of one and was suspended for the other.

Next: The Bills put a bow on the 2018 season, hosting the Miami Dolphins at 1 p.m. Sunday.

Here are five things to watch against the Patriots:

1. Josh Allen vs. Tom Brady. Allen missed the first game against New England because of injury, so it’s his first time going up against the best quarterback of all time. Allen’s completion percentage has been a hot topic this week. The Bills say they’re not overly concerned with it, even though it’s just 52 percent. Still, it would be nice to see the rookie improve that number over the final two games.

2. How healthy is Rob Gronkowski? The Amherst native is dealing with back and ankle injuries. Gronk has dominated his hometown team, with 69 catches for 1,070 yards and 12 touchdowns in 14 career games. Those injuries, however, have taken a toll on Gronkowski, who has 45 catches for 658 yards and three touchdowns this year. There is plenty of speculation in New England that this could be Gronkowski’s last season with the Patriots.

3. Can Robert Foster keep it going? The undrafted rookie has been one of the best receivers in the NFL since Week 10, when he was called up from the practice squad. In five games, he had 438 receiving yards. Foster has brought a big-play element to the Buffalo offense, with eight catches of 25 or more yards, second most in the NFL over that span. His 24.6 yards per catch would lead the league if he had enough receptions to qualify. It will be interesting to see if Patriots coach Bill Belichick puts old friend Stephon Gilmore on Foster.

4. Can the pass rush get to Tom Brady? The Bills have failed to record a sack in back-to-back games, although they did a better job last week of at least hurrying Lions quarterback Matthew Stafford. In the first meeting with New England, the Bills sacked Brady twice, both by linebacker Lorenzo Alexander. Buffalo has 31 sacks on the season, which ranks just 27th in the NFL.

5. Will Sean McDermott stay aggressive? Last year against New England, the Bills’ coach called for a field goal on fourth and 1 from the Patriots’ 32-yard line while trailing by seven points early in the fourth quarter. Stephen Hauschka missed the 50-yard attempt and six plays later, the Patriots scored a touchdown that put the game away. It was a reminder that field goals don’t beat Brady and Co. Last week, McDermott went for it on fourth and 2 against the Lions when trailing, 13-7, instead of attempting a 31-yard field goal. It was out of character for the Bills’ coach, but a welcome change.