When Anthony Johnson leaped and caught his second pass of the game against Rutgers on Sept. 22 in Piscataway, N.J., the University at Buffalo wide receiver landed awkwardly on his left leg, and he felt an unusual sensation pierce his thigh.

Johnson didn't think that way. He considered the long-term ramifications of his approach to the injury and his role with the Bulls. Quiet by nature, he chose to be positive.

“I knew I had to keep my head on,” Johnson said. “I knew I could only control what happened, and I still had to cheer my teammates on and be active in the meeting room and push the younger guys who had to step up. I still had a role here.”

Johnson will play his final game at UB at 7 p.m. Saturday, when the Bulls face Troy in the Dollar General Bowl in Mobile, Ala. It hasn’t been an easy season for Johnson, who began the year as a projected first-round draft pick but endured the loss of a friend and an injury that still could impact his NFL draft status.

The faith of his family buoyed him. The love of his teammates motivated him. Some perspective from a life-changing experience helped him stay positive, too.

“Anthony doesn’t say a lot around coaches, but my respect and admiration for Anthony has grown in so many ways, not as a football player but as a human,” UB coach Lance Leipold said. “To watch him go through it, even in this bowl game. A lot of people would wonder if a guy who got dinged up in a championship game was going to play? Not even a question.

“He learned that his competitive nature has put him in a position where he wants to keep going and keep striving. To watch him become the man he is, it’s the reason why we do what we do.”

The past 18 months have been a whirlwind for Johnson, who emerged as a legitimate NFL prospect in 2017 but chose to return for his senior year to finish his degree in sociology and improve an already-high draft stock.

Then the season started with a shock.

The day before a 36-29 win Sept. 8 at Temple, Johnson found out that De’mon Davis, his best friend since elementary school, had been shot to death in their hometown of Rock Hill, S.C.

Fellow receiver K.J. Osborn became Johnson’s rock immediately after he learned of the death of his friend.

“K.J. stayed by my side,” Johnson said. “He pushed me. He kept my head on straight.”

Two weeks later at Rutgers, Johnson injured his left hamstring. The injury sidelined him two games and limited him in a third game.

“I tried to run more but I couldn’t run,” Johnson said of the injury. “I guess I pulled it a little bit and  (UB receivers coach Rob Ianello) told me to relax, so that’s what I did. I thought it was something minor, that would just heal, but after that, I tried to practice and tried to do things. I couldn’t run. I didn’t know it was that much worse.

“It was worse than I thought. It frustrated me, not being able to practice and missing games. But every day, I knew I could control what I could control, even if it meant staying in the training room to get better.” 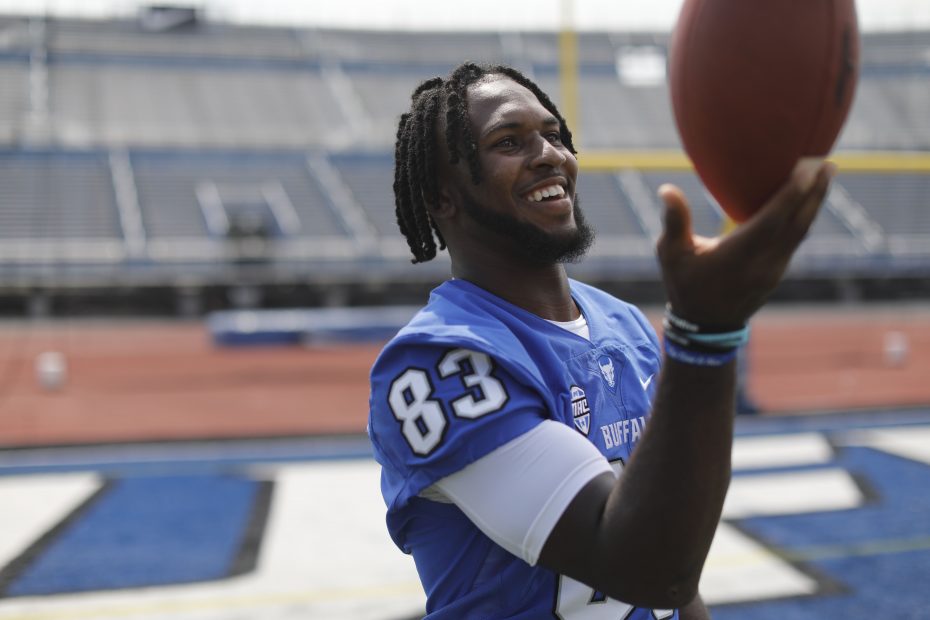 Life could be a lot worse for Johnson, who proved his resiliency well before he got to Buffalo. In South Carolina in the fall of 2012, Johnson survived a car accident in which he was ejected from the back windshield and landed head-first on the pavement. He was hospitalized and sustained a concussion. His Instagram account shows photos of the scars and a close-up of him in a hospital bed.

Miraculously, Johnson walked out of the hospital a few hours later, though a doctor told him he would never play sports again. Johnson, his family and his coaches sought more opinions on his health.

“I didn’t want to let him play if he ran the risk of getting hurt,” said Strait Herron, Johnson’s coach at South Pointe High School in Rock Hill, about 30 miles south of Charlotte, N.C. “He wanted a second opinion, and said he needed to know if he had another chance. If we hadn’t done all that, he wouldn’t be where he was now.

“I told him, 'You cannot play until a doctor says you can,' and my staff and I would do that for any player. But now that I think about it, where would he be now if a doctor had said no, and he’d just listened to one person?”

Johnson averaged 20 yards a catch on 46 catches and had 11 touchdowns as a senior at South Pointe. But he didn’t have the grades, and went to Butler Community College in Kansas in 2014 and Iowa Western Community College in 2015 before he joined the Bulls in the summer of 2016.

“Juco (football) is tough,” Herron said. “It’s a different world of college football. He was able to do that and be successful there, and that said so much for him. Seeing him go through all those trials and still, to be focused on what he wants to accomplish, it’s awesome to see that in him.”

He sat out his first season at UB as a medical redshirt because of back and hamstring injuries, but blossomed into an NFL prospect in 2017 when he caught 76 passes for 1,356 yards and 14 touchdowns. He had six games with at least 100 receiving yards, and four games in which he had at least two touchdown catches. He appeared to be headed to the NFL.

Johnson turned to his family when he first decided whether to enter the NFL draft.

Johnathan Joseph, a cornerback with the Houston Texans and Jadeveon Clowney, a defensive end/outside linebacker with the Texans, are Johnson's cousins, South Carolina products who are former first-round NFL draft picks.

"I told him how the draft process works out," said Joseph, who was drafted 24th overall by the Cincinnati Bengals in 2006. "Do your homework. Use the people that are closest to you, your family, your advisors or whoever it may be, to give you the best judgment going forward because that's a difficult decision. Not only with that, we've had several decisions before, back to when he was in junior college, so I think he kind of trusted my judgment, but at the same time, I wanted it to be his ultimate decision, at the end."

Clowney, who was taken No. 1 overall by the Texans in 2014, was advised to sit a year before he was eligible for the draft. When Johnson was trying to decide whether to enter the the 2018 draft, Clowney gave him the same advice he gave himself.

"Why would I quit?" Clowney said. "I told him, 'You love football too much to be sitting out a year. Go on and put another show for the people. Play, so you can try to become a higher draft pick.' "

Now, Clowney offers Johnson more advice for when he prepares for the draft in April: Watch a lot of film, and take care of your body, which has to withstand more wear and tear over the course of training camp, a 16-week season and the playoffs.

"That's what he's going to have to take advantage of when he gets to the league," Clowney said. 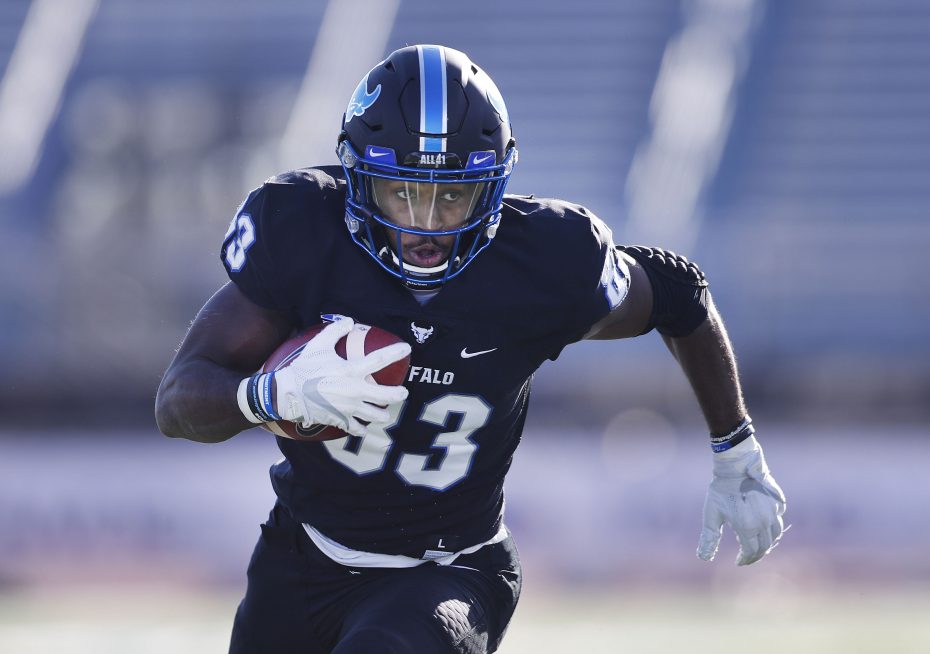 University at Buffalo wide receiver Anthony Johnson runs for a touchdown after making a catch in the first half of the game at UB Stadium in Amherst Friday, November 24, 2017. (Mark Mulville/News file photo)

While injuries this season didn’t deter Johnson, they may have an impact on his NFL draft ranking.

Dan Shonka, the general manager of Ourlads Scouting Services, projects Johnson as a third-round pick. The former scout says Johnson did the right thing by returning to UB for his senior year.

“This isn’t a great year for receivers,” Shonka said. “That could help him if he runs well and works out well at the combine. He has the production at UB.”

Shonka anticipates the 6-foot-2, 210-pound wide receiver will receive an invite to the NFL Combine in February. Johnson, he said, can improve his stock by working on his speed and his starts. According to nfldraftscout.com, Johnson runs 40-yard dash in 4.54 seconds. By comparison, Ohio State's Paris Campbell was timed at 4.35 seconds.

“If he can lower that speed and run that speed at the combine time, that isn’t the end-all, be-all, but that would be a big thing, whether it’s agility, the short shuttle or how quickly he can get from one point to another.

“Now it’s a competition. He has to run faster, jump higher and be quicker than the other guys.”

Johnson will return to Mobile next month to play in the Reese's Senior Bowl at Ladd-Peebles Stadium. It's a showcase for NFL prospects; Senior Bowl executive director Jim Nagy said NFL teams drafted 83 of the 110 players who participated in the 2018 game.

Johnson, Nagy said, jumped out on tape because of his ability to run after the ball is thrown, his quickness and his size.

"He's just one of those guys, who, when you watch him on tape, he looks like a pro receiver," said Nagy, who was a regional and national scout for 18 years with the Kansas City Chiefs, Green Bay Packers and New England Patriots. "He can make something happen once he catches the ball in his hands. He's a guy that really intrigues the league.

"The MAC is a good conference, but coming here to the Senior Bowl, it's going to be a jump for him to go against SEC cornerbacks and Big Ten corners. I know that UB has played up a couple times but this will be a showcase for him. Anthony, to me, no matter where each team projects him, he can only move up by coming down here (for the Senior Bowl)."

A finale in Mobile

Johnson enters the Dollar General Bowl on Saturday against Troy with 944 yards and a MAC-leading 11 touchdowns on 52 catches. He will become the first in his immediate family to earn a college degree.

Then, he will pursue a career in the NFL.

It’s become a trend in college football for draft-ready prospects to skip bowl games to concentrate on training for the pros or to recover from injuries. But that’s not Johnson’s path.

He gave minimal thought to skipping his last game at UB. He believes he has an obligation to help the people who have helped him.

“At the end of the day, I owe this to my teammates,” Johnson said. “I see how those guys work and how they push me and how I push them, so I just want to go out and compete for those guys, so we can bring this win home."