It’s what you don’t see, smell or hear that separates Elderwood at Lancaster from poorly run nursing homes.

There are no pungent odors from incontinence that often are a telltale sign in low-rated nursing homes. The air smells clean. The floors shine.

There is no undercurrent of tension. At short-staffed nursing homes, conversations between staff and residents sometimes begin with yells for help and a harried response. At Elderwood, nurses and aides talk and laugh with residents, offering assistance to push a wheelchair or answer a question.

And there are few complaints. At some poorly rated local nursing homes, residents complain about the staff forgetting to feed them or leaving them in their own waste for hours. At Elderwood, residents say the staff takes good care of them.

Elderwood at Lancaster has the best federal ratings among the 47 nursing homes in Erie and Niagara counties and is one of the top-rated in New York State. The home has received five-star ratings, or "much above average," the highest award, from the federal government in four of five criteria. Only 12 of the 619 nursing homes in New York State had better ratings than Elderwood at Lancaster.

Several years ago, this was not the case.

From 2011 to mid-2015, Elderwood at Lancaster was consistently rated "average." But for the last 2 1/2 years, state Department of Health inspections have found no deficiencies in the care of residents or in how the facility is maintained.

How do they do it?

There is no one answer. But a look inside the nursing home shows staffing, low turnover and a local executive team have helped it stand out. Registered nurses at Elderwood at Lancaster spend more time per day with residents than at all but two of the 47 nursing homes in Erie and Niagara counties. About half of its certified nursing assistants have worked at the home for more than a decade. And Elderwood workers, from the nurses to the certified nursing assistants, credit strong, locally based leadership.

Money also matters. State Health Department records show 18 percent of residents at Elderwood at Lancaster paid their own way in 2016 — a higher rate than many area nursing homes with low staffing levels.

It could have gone differently if the new owners of the Elderwood nursing home chain had shifted the headquarters to New York City when they bought it for $141 million in 2012.

Many nursing homes in Western New York acquired by out-of-town owners in the last decade struggle to provide quality patient care, according to the results of state inspections that are used in helping calculate the federal rating system.

But when Dr. Jeffrey Rubin and Warren Cole, who have ownership interests in Post Acute Partners, invested in the Elderwood homes, a decision was made to keep the for-profit chain headquartered in Buffalo. Rubin moved from New York City to Buffalo.

"The plan was always for me to move up here," Rubin said. "We made a large investment and it meant my moving up here."

Six of the eight Elderwood nursing homes in the two counties have overall four- or five-star ratings, with the exceptions of the Elderwood homes in Grand Island and Lockport.

For a nursing home to succeed, it starts at the top with the owner and home's administrator, according to Richard J. Mollot, who leads a national advocacy group for nursing home residents.

"If the operator and administrator are dedicated to meeting the standards of care, it translates down to the staff and the results are beneficial for the care of residents and the workers," said Mollot, executive director of the Long Term Care Community Coalition.

"You can have a passionate administrator and department heads, but if they don't have the support of the owner, it is hard to improve care," added Lindsay Heckler, a staff attorney at the Center for Elder Law & Justice in downtown Buffalo.

A nursing home that delivers quality care to its residents will matter to most people here and across the state at some point. There are about 117,000 people in New York nursing homes. But in the course of a year, about 360,000 individuals spend time in a skilled nursing facility for short-term rehabilitation care or long-term placement, according to LeadingAge New York, an Albany-area organization representing nonprofit, long-term care providers. 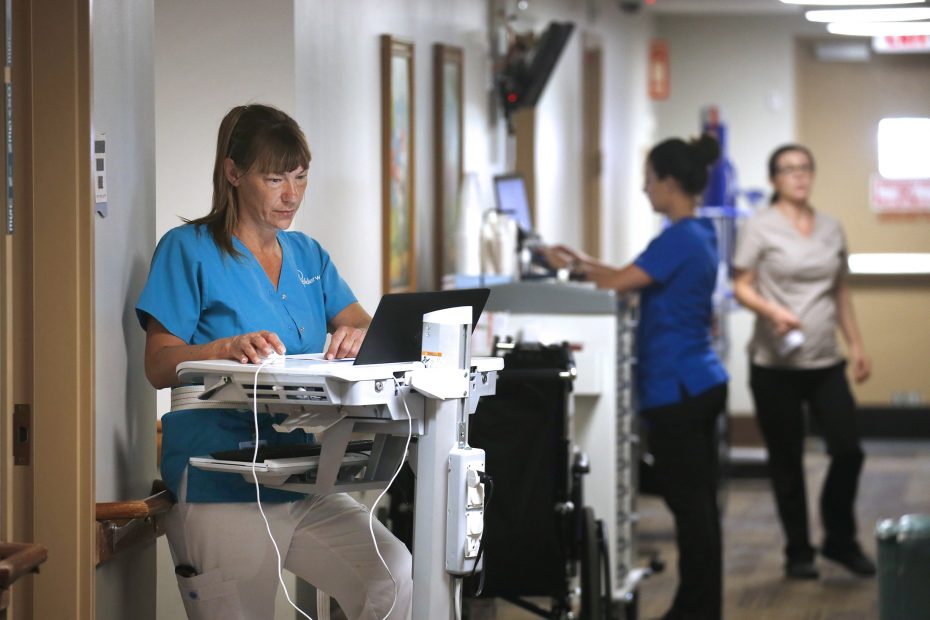 Staff monitor the needs of residents at the Elderwood at Lancaster facility on Como Park Boulevard in Lancaster. (Robert Kirkham/Buffalo News)

With staffing the largest expense in running a nursing home, the number of hours worked by nurses provides a measure of whether an owner is committed to providing quality care, advocates say.

At Elderwood at Lancaster, registered nurses spend, on average, 68 minutes a day with each resident, according to the federal Centers for Medicare and Medicaid Services. Only two other nursing homes in Erie and Niagara counties have higher ratios.

"There is considerable evidence of a relationship between nursing home staffing levels and resident outcomes," the Centers for Medicare and Medicaid Services said in its May 2018 manual explaining the star-rating system.

In contrast to Elderwood at Lancaster, Safire Rehabilitation of Southtown, one of the lowest-rated homes in the two counties, has a registered nurse staffing ratio of 17 minutes per resident per day. The state and national averages are 42 and 41 minutes per resident.

On overall staffing, the federal government rated Elderwood at Lancaster at four stars, or "above average."

Revenue to fund staffing comes from either public tax dollars in the form of Medicare and Medicaid or private pay that can include long-term care insurance or a resident's assets — often personal savings or a house. Once those assets are depleted, Medicaid takes over paying at a substantially lower rate than private pay levels.

At Elderwood at Lancaster, the private pay cost for a single-occupancy room is $439 per day, or $160,235 a year. Medicaid pays $220 a day. According to Health Department statistics, about 18 percent of the residents there in 2016 paid their own way.

That would help explain why this facility has more financial resources to hire nursing staff and maintain a higher ratio of time between registered nurses and residents.

When a facility has a lower percentage of private-pay residents, there's less money.

At the Absolut Center for Nursing and Rehabilitation in East Aurora — which had a two-star rating in staffing, "below average," until last month when it was upgraded to three stars, "average" — 11 percent of its residents paid privately in 2016, according to the most recent Health Department figures. The amount of time per day per resident with registered nurses was 25 minutes — almost three times less than at Elderwood.

The high ranking of Elderwood at Lancaster has created demand for its beds.

"We'll have several people on a waiting list from time to time, but that fluctuates. It comes down to bed availability," said Mark Dirlam, assistant administrator at the Lancaster facility.

He said prospective residents, whether they are coming to the home by means of private pay or Medicaid, are treated equally.

Achieving a high level of patient care, Heckler said, also requires a willingness to listen to residents and their families when they raise concerns.

"You need to ask your residents, their families and your staff what you need to do. Do you have any issues? Come and see me," Dirlam said.

Several residents The News interviewed at the facility said the staff is responsive in meeting their needs and that they are treated well.

"It's a good place and I'm here to stay, but there is no place like home," said Lucille Szybala, who moved to Elderwood in 2016 after suffering a stroke. She passed away Dec. 14 at 94.

On the front lines

Deborah Wainwright, the director of nursing, arrived nearly six years ago at the Lancaster nursing home. It was about that time that the turnaround started, said Nicole King, a certified nursing assistant at the facility.

"Debbie brought a positive spin. She started doing more for the staff. She showed appreciation for what we do," said King, a nursing assistant of 20 years.

Wainwright said she tries to put workers in jobs that play to their strengths and is keenly aware that the work is not always easy.

Certified nursing assistants often perform the most difficult of jobs. They are the ones who take care of the personal needs of residents. That includes toileting, bathing, grooming and feeding them when necessary. Residents with mobility issues also depend on them for transferring out of their beds and into wheelchairs. 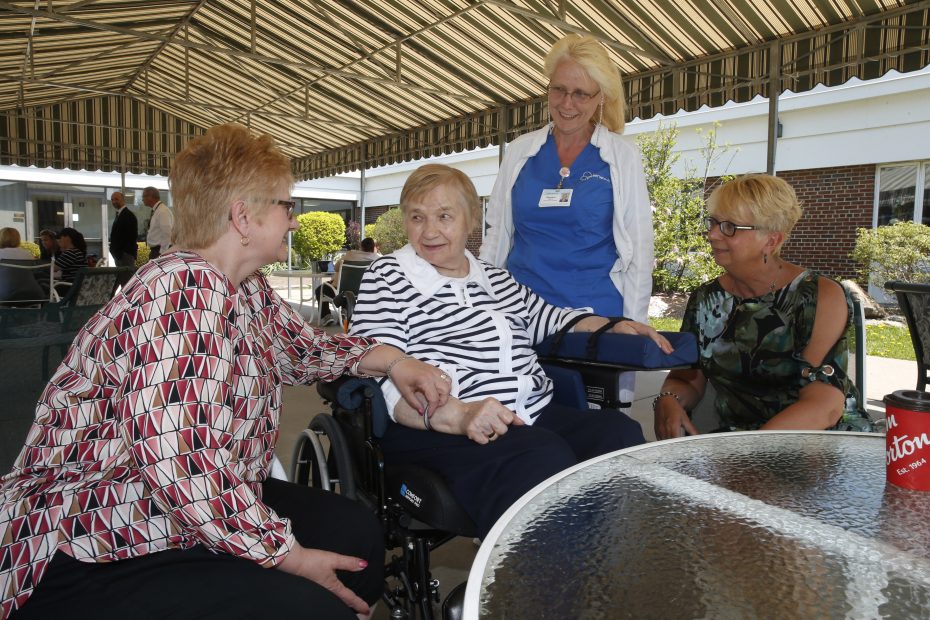 From left, Luba Joven, her mother Maria Dranka, 93, Licensed Practical Nurse Doreene Pierce, and Joven's twin Nina Palmeri spend some time together while the twins were visiting their mother at Elderwood at Lancaster nursing home on May 17, 2018. (Robert Kirkham/Buffalo News)

Another piece of the puzzle for a nursing home to succeed is to provide activities that cognitively engage residents and make them want to be a part of the community rather than spending time in their rooms, according to Natalie Danielski, the Lancaster facility's activities leader.

When the Buffalo Bills made the playoffs last December, the home threw a party. At the start of the 2018 Winter Olympics, residents participated in their own opening ceremony. And when the temperature hit 60 degrees for the first time this past spring, a "heat wave" was declared and everyone was treated to ice cream sundaes.

Luba Joven, the wife of a physician and a retired registered nurse, said she picked the Elderwood nursing home for her 93-year-old mother, Maria Dranka, three years ago based on her experiences of working in different nursing homes over the years.

"This home is a perfect example of cohesiveness and it trickles down from the administration to every staff member," Joven said.

But what really impressed her was when her mother became ill and required a stay in the hospital two years ago.

"While she was at the hospital, two of the nursing assistants came on their own time and visited her," Joven said. "That made my mom feel like they really cared."