The road from Jamestown to Buffalo snaked through Kansas, at least for James Rojas.

Two years ago, the former All-Western New York high school basketball star had captured the attention of the coaching staff at the University at Buffalo with his size, skill, versatility and toughness. But he didn’t academically qualify to play at the Division I level.

“I knew the guys at Hutch and knew it’d be a good fit for him academically and athletically,” Hodgson said. “He had nothing. Nobody knew about Rojas. He was at Jamestown High School. Western New York basketball hasn’t been great for the past couple of years, so he kind of flew under the radar. We watched him and were like, 'Holy (smokes), this is a guy that in two years can be a really good player for us,' So we sent him out there to kind of watch him develop and the next thing you know he’s a preseason junior college All-American.”

Rojas last month became one of three JUCO players to sign a national letter of intent with the nationally-ranked UB men’s basketball program, a “mid-major” that’s grown into a perennial NCAA Tournament participant in the last four years, in large part because of a consistent infusion of talent from the JUCO ranks.

The Bulls have reached the NCAA Tournament in three of the last four seasons and earned their first victory there by shocking Arizona in the first round last March. They are unbeaten through 10 games this season, ranked No. 14 in the country by the Associated Press and looking to make a statement with games Tuesday at unranked Syracuse and Friday at No. 20 Marquette.

And now that Buffalo is on the national radar, it intends to stay.

UB will lose five seniors off this team, including guards C.J. Massinburg, Jeremy Harris and Dontay Caruthers and forwards Nick Perkins and Montell McRae – three of them with JUCO backgrounds – and coach Nate Oats aims to sustain the program by continuing to mine the JUCO ranks for players who can contribute right away.

In addition to Rojas, a 6-foot-7 forward, the Bulls have signed 6-5 wing Durey Cadwell from Daytona State and 6-9 forward Andre Allen from Arizona Western College. This season, Rojas is averaging 16.8 points and 5.9 rebounds. Cadwell has averages of 7.9 points and 2.5 rebounds, and Allen has posted 12.9 points and 9.3 rebounds.

There’s even a chance, with two scholarships remaining, that UB doesn’t sign a single high school player during this year’s recruiting cycle.

“Ideally, you’d probably try to find at least one or two high school guys there,” Oats said. “But if we don’t find high school guys that we think are good enough to compete in this program right away, then we’re not going to take them.

“At this level where we are right now, being able to get in the top 25, I think we just have to find the best players that have a high character that fit with our culture right now, wherever they may come from, transfers, JUCOs, high school, prep school, whatever it is.”

While Oats vows to look everywhere for players, he also knows he has a more compelling recruiting pitch than he once did.

"I think some kids still act like they might be above Buffalo," Oats said. "Well, OK, we're ranked 14th in the country. Do you have a scholarship offer from the 13 teams above us? ... We're to the level now where unless you're going to a Kansas, a Duke, a Kentucky, if you're going to one of the true blue bloods, yeah, I get it. But anything other than that, I feel like we can compete with the rest of them." 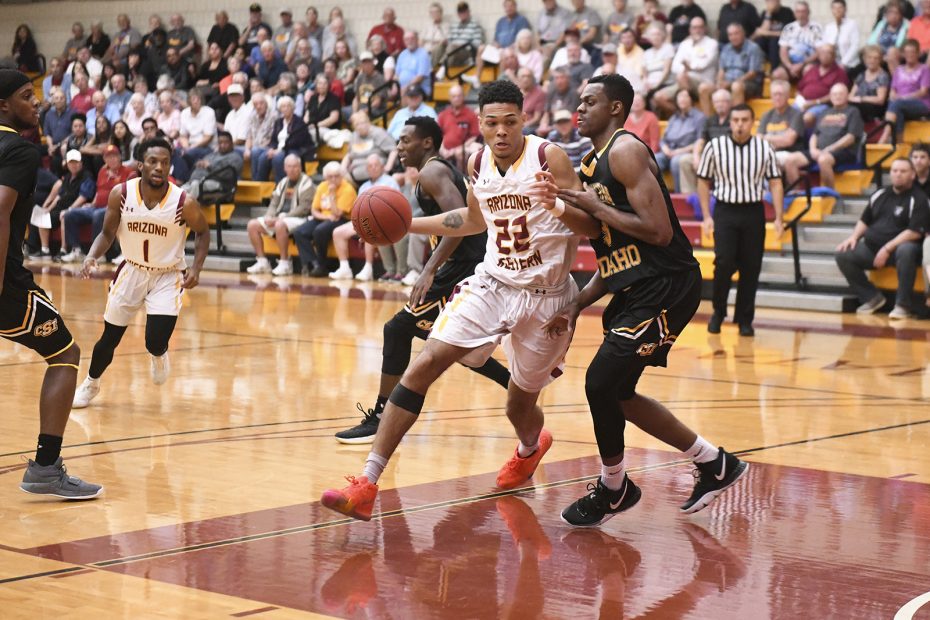 There are inarguable benefits to signing JUCO players over high schoolers, particularly for “mid-major” teams such as UB, which can’t compete with elite Division I programs for the top high school basketball talent in the country.

“To me, it makes a lot of sense,” said Jerry Meyer, the veteran director of basketball scouting for recruiting website 247Sports. “Junior college players, you’re just going to find a more mature guy who has already played college ball in a not-so-glamorous situation. And they’re typically tougher, more mature, more willing to grind, more willing to work, so I think they can really have a positive impact on a team.”

The trade-off is you often get a player with only two years of college eligibility remaining.

Buffalo has four players on its roster with JUCO experience and forward Gabe Grant is with the program but is sitting out after playing at the University of Houston. He began his college career in junior college.

One of those players, Harris, piled up 23 points and a team-high seven rebounds in UB’s 89-68 upset victory against Arizona in the NCAA Tournament last season.

The Bulls simply don’t win that game without him.

And they don’t sign him in the first place without making the NCAA Tournament in 2015 and ‘16.

“When they were recruiting me, they went to the tournament the year before, so that really caught my attention,” Harris said. “I always wanted to play in the NCAA Tournament. I just believed in the coaching staff and the culture they had here and I wanted to take a different route, and I feel like I made the right decision.”

He had few options. Harris failed to academically qualify to play Division I basketball from both his high school in North Carolina and prep school in Virginia. He enrolled at Gulf Coast State College in Panama City, Fla., where he played in the Panhandle Conference, one of the top JUCO leagues in the country.

But he was handed nothing. And he was humbled by the experience.

“You wake up, you’ve got to get food on your own. They’re not giving you breakfast,” Harris said. “And then you’ve got weights, but there’s no strength coach. It’s the head coach running the weight room. You’re still getting the work in, but it’s a different vibe. You don’t see many people on campus. … And at lunch, you always eat with the team. There’s nobody really sitting around in the JUCO cafeteria. And then the games … out of conference, there’s not a lot of people there at all.”

Once his grades were in order – JUCO players who were academic nonqualifiers out of high school need to earn an associate’s degree and have a 2.5 transferable GPA to make the jump to Division I – he ended up choosing UB over an offer from Texas Tech.

“I’m very grateful for this opportunity because I came from nothing,” Harris said, attributing his JUCO experience to making him a better student and better player. “Everybody when I committed was like, ‘Buffalo? Why Buffalo?’ I just gave them a short, brief answer, and now it speaks for itself.”

Oats knows UB wouldn’t have been able to sign a player as talented as Harris out of high school, at least not at that stage of the program’s development, because players who are that good and have all four years of eligibility often head to the high major schools.

And once Harris graduates, the JUCO pool offers UB the most readily available way to replace his production.

Steve Forbes, the head coach at Division I East Tennessee State, mines the JUCO ranks for talent, just like Buffalo.

Forbes played JUCO ball and previously coached in the Panhandle Conference at Northwest Florida State, which he called “kind of the Duke of junior college.”

“There’s a stigma, ‘Oh, he went to JUCO, he’s not a good guy or a good player or a good person,’ ” Forbes said. “I think that’s totally wrong. There’s all kinds of success stories out there in junior college. There’s failures at every level, from prep school to AAU to high schools to foreign kids. Unfortunately, there’s a bit of a stigma there, but I think programs like Buffalo and myself and others have helped change that. 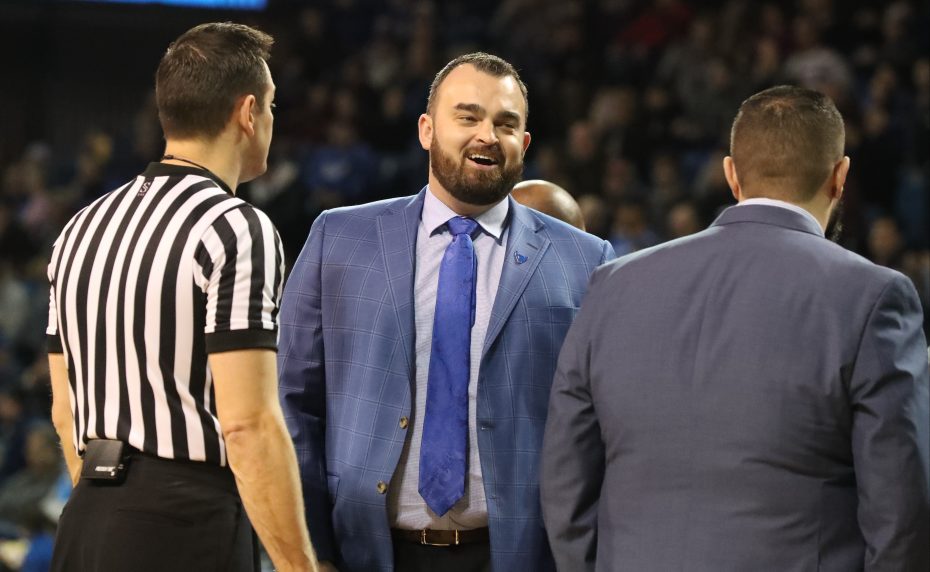 “I have my programs that I keep tabs on,” Hodgson said. “I know each September I’m going to swing through Florida, Kansas and Texas and I have three or four JUCOs in each state that I’m going to make sure I go into every year. I know they’re going to have good players who are well-coached, and the academics are big, too.”

Cadwell, who signed with UB last month, was an academic qualifier out of high school and will join the Bulls with three years of eligibility remaining.

Oats said UB wouldn’t be unbeaten, ranked No. 14 in the country and shooting for another NCAA Tournament appearance without the infusion of JUCO players.

“Absolutely not. There’s no way,” Oats said. “If you look at the guys that have helped us get to this level, that have helped build this up. Blake Hamilton helps us get to the tournament two years in a row. (David) Kadiri, (Willie) Conner, even Justin Moss, the fact that we were able to go to the tournament the first time, we don’t go without him. If we don’t go to that one, we don’t get some of the other recruits.

“Even the high school guys that we’re bringing in right now, you don’t get that caliber of player if you’re not winning already and have the program where it is, and we’ve done a lot of that winning with a pretty good mix, about half high school, half junior college guys. And without the junior college guys, there’s no way we are where we are right now.”