Some teenagers remember their 16th birthday for the car their parents gave them as a present, or for the blowout party that’s thrown in their honor.

The Bulls crowded around Longo as he sat in a wheelchair behind the end zone in the Buffalo Bills’ practice facility in Orchard Park. The players and coaches belted the song at the top of their lungs, slightly off-key yet extremely jovial. Longo beamed and grinned for the entire duration of the song.

Longo joined the Bulls in September as part of the Team IMPACT program, which pairs children and teenagers with disabilities with college athletic teams across the country. Longo has Bethlem myopathy, a neuromuscular disease that inhibits growth of the skeletal muscles and connective tissue. He uses a wheelchair because his leg muscles cannot support his body weight.

Longo has attended every UB home football game this season and the Mid-American Conference championship game Nov. 30 in Detroit. He and his family plan to travel to Mobile, Ala., to see the Bulls play Troy in Saturday's Dollar General Bowl.

“If I’ve learned anything from the players, it’s to stay humble, even as talented as you are,” Longo said. “Make sure to always stay humble and know what to say in certain situations, without getting too cocky.

“But what I’ve gained from this? I’ll take away how much fun I’ve had. And to never forget this experience, because I may never get an experience like this again.”

Longo has gained the camaraderie of being part of a team, and he’s given the Bulls a new perspective.

“I was diagnosed with Type 1 diabetes when I was nine years old, and my mom explained it to me, that what happened to me, it could have been anything worse,” said Eddie Wilson, a defensive tackle at UB. “Peyton is dealing with a worse situation than mine, and he stays strong. And I told him, ‘Be strong. Don’t ever give up.’

‘As long as he is positive, we are positive’

Longo is a sophomore at Maryvale High School in Cheektowaga. He gained his love of sports from his father, Dennis, and he’s grown up a fan of the Bills, the Bulls, the Sabres, the Bandits and the Bisons. Longo is a history buff and an aspiring baseball announcer with an even voice, who regularly studies audio of legendary Los Angeles Dodgers announcer Vin Scully.

Longo received an official diagnosis of Bethlem myopathy four years ago. According to the National Institutes of Health, it is a nondegenerative rare form of muscular dystrophy that is characterized by slowly progressive muscle weakness and joint stiffness, and it affects .77 of every 100,000 individuals.

Few people ask Longo why he is in a wheelchair, but as he sat last week in his living room in Cheektowaga, MLB Network on his television and Christmas ornaments twinkling on a tree behind him, he explained what Bethlem myopathy is.

“It affects my legs, and the muscles, and the arm muscles,” he said.

Then, he sheepishly grinned.

“But it doesn’t affect my brain.”

“Peyton grew up not being able to walk as fast as he could, and he wasn’t able to be involved in sports participation,” she said. “But he rolls with it. He is so mellow, and so accepting.

“As long as he is positive, we are positive.” 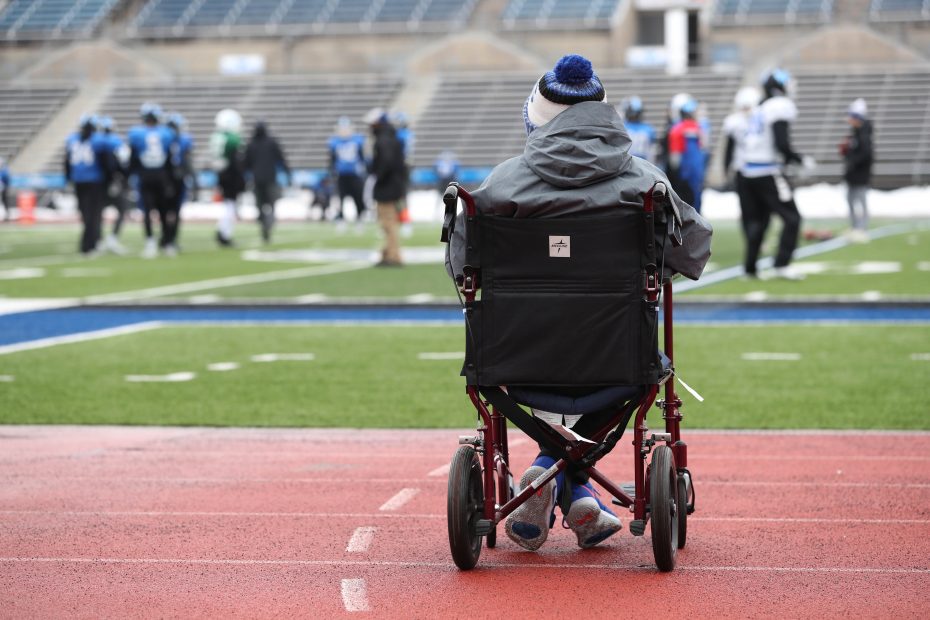 A social worker noticed Longo’s love of sports during a meeting in the summer with Peyton and his family, and encouraged them to apply with Team IMPACT.

Team IMPACT is a national nonprofit organization based in Quincy, Mass., that has placed more than 1,600 children with more than 500 athletic college teams since its founding in 2011.

“These are generally children, who because they have medical conditions, may be socially isolated or behind in school,” said Rebecca Carr, a Team IMPACT case manager for the New York region. “What we’re looking for, for these kids, is a team environment. It doesn’t matter what their sport is, but we want them to feel like this is their team..”

In each pairing with a team, Team IMPACT aims to give the children in its program optimism, to increase each individual’s confidence and to give them a sense of belonging.

Longo joined a team that appealed to his sensibilities as a professed Buffalo sports nut.

“To know it was the football team, I knew they were going to have high expectations for the season,” Longo said. “They have a lot of good players, and I was excited to become a part of their team.”

When he first met with the Bulls on Sept. 24 at UB Stadium, coach Lance Leipold brought Longo into the team huddle after practice with a unique introduction.

“We have a new member of the team,” Leipold shouted to his players.

They got to know Longo and made a point to include him when he was at practices or visiting the team facility, whether it was a funny exchange of text messages or spirited video game session.

“The best part about getting to know Peyton is knowing that someone is dedicated to your team,” Slack said. “He’s funny, he’s really cool, and he always makes these little jokes. And he always tells me that he can beat me at Madden. I haven’t played him yet, but he’s played a few guys on the team and he is really confident, especially about playing Madden.” 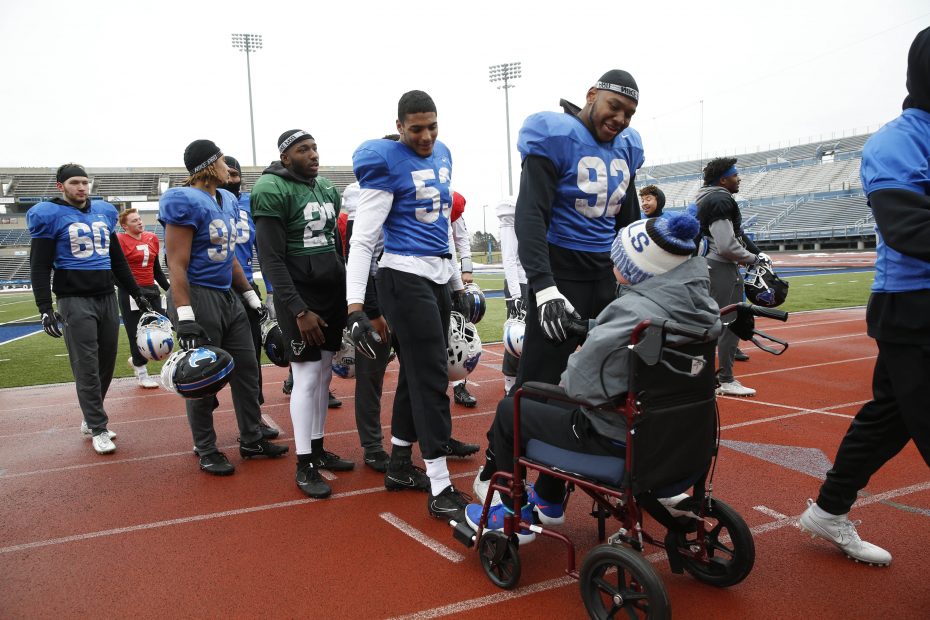 Longo has become a mainstay on the Bulls' sideline at practices and players gives him a fist bump as they leave the field. During an unusually warm stretch of fall in Buffalo, Slack stopped to say hello to Longo and his family after a practice at UB Stadium. He handed Longo a pair of athletic gloves, and told him to hang on to them.

“I told him that it gets cold here, so he should hang onto those,” recalled Slack, who grew up in Southern California.

Just before the MAC Championship game in late November, Slack saw Longo at UB Stadium, bundled up in the frigid weather. Slack looked at Longo’s hands.

“He was wearing my gloves, and I was like, 'Wow, those are my gloves! '” Slack recalled. “He didn’t forget about them!"

As he told the story a few weeks after that meeting, Slack paused and considered the impact Longo has had on him.

“He’s taught me to live life to the fullest, no matter what your situation is,” he said. “He can’t do what we can do, but he is always smiling and always joking around. That has made me think, ‘Wow, if he can go about his day and smile, that’s how I should live my life.’

“Go through life with a smile. Do it like Peyton does.”