All the alpacas needed to do was stand there. And that’s what they did. That's pretty much all they ever do.

At the sprawling Roycroft Campus in East Aurora, the iconic architecture usually steals the show. Each intricately crafted exterior dots a quaint, time-traveling setting. But nothing -- not even the Roycroft buildings -- could steal attention away from three alpacas wearing festive headbands.

As shoppers strolled into the Roycroft Inn’s annual holiday show, they were delighted by the fluffy alpacas wearing antlers and Christmas light headbands.

“Hello, pretty babies. Aren’t they cute?” said a curly-haired woman in a faux leopard lined jacket, who stopped to gawk at the lovable livestock.

“They almost don’t look real,” said someone else in passing.

Two toddlers in matching blue jackets couldn’t peel their eyes from the alpacas. “I like that one,” one of the boys pointed, trying to get a closer look.

"Why is there poop right there? That is disgusting," one of the boys asked. It's the farm life, kid.

Brad Lang smiles. He’s been up since 5 a.m., doing farm chores and getting the talent ready for the Roycroft show. The night before, Brad and his wife, Jeanne MacLeod-Lang, were awake until nearly midnight, after showing the alpacas at the Larkin Square tree-lighting.

Upstairs inside one of the Roycroft buildings, Jeanne set up her pop-up alpaca store, vending everything from classic socks, sweaters and blankets to kitschy pins, cookies and keychains.

The two have built quite the alpaca empire at their farm, Thistle Creek Alpacas. And they bring that empire to festivals, concerts, schools, libraries and bars across Western New York, vending alpaca goods to afford the costly efforts of rehabilitating and caring for the 67 alpacas currently at their farm.

When my colleague and I spoke about writing an alpaca story, he said it best. “These alpacas go to more Western New York events than you do.”

And they’re undoubtedly more fun at holiday parties than all of us.

Falling in love with alpacas

In 2005, Jeanne and Brad migrated their blended family of seven from the ‘burbs to their Elma farm, located on a quiet, rural side street that used to belong to the town historian.

A trip to the Cattaraugus County Fair changed their lives when it was love at first sight with an alpaca, a lesser-known member of the llama family. Brad recalled thinking it looked like "somebody won a teddy bear on the midway."

“But I fell in love with them,” Jeanne said.

“So we talked to him about it, and…” Brad said.

“Here we are,” Jeanne said.

Although they weren't "agricultural people," the couple bought four pet-quality alpacas off of Craigslist from someone leaving the business in 2006.

“We didn’t really enter into this to make money,” Jeanne said.

“We didn’t enter into it to lose money,” Brad replied.

By now, they seem like alpaca experts, rattling off historical facts and trivia about the animals. Standing in their barn, surrounded by 67 sweet-faced alpacas, they talked about the animal's gestation period (11-and-a-half months), life expectancy (15 to 20 years), American alpaca farm history, shearing, fiber grading and products.

Though the two have full-time jobs -- Brad is a corrections officer in Attica and Jeanne is a registered nurse and coder -- they make time to visit schools and libraries as well as host an open house, where they teach children and adults about alpacas and how they’re not llamas (for one, they don’t spit as much). 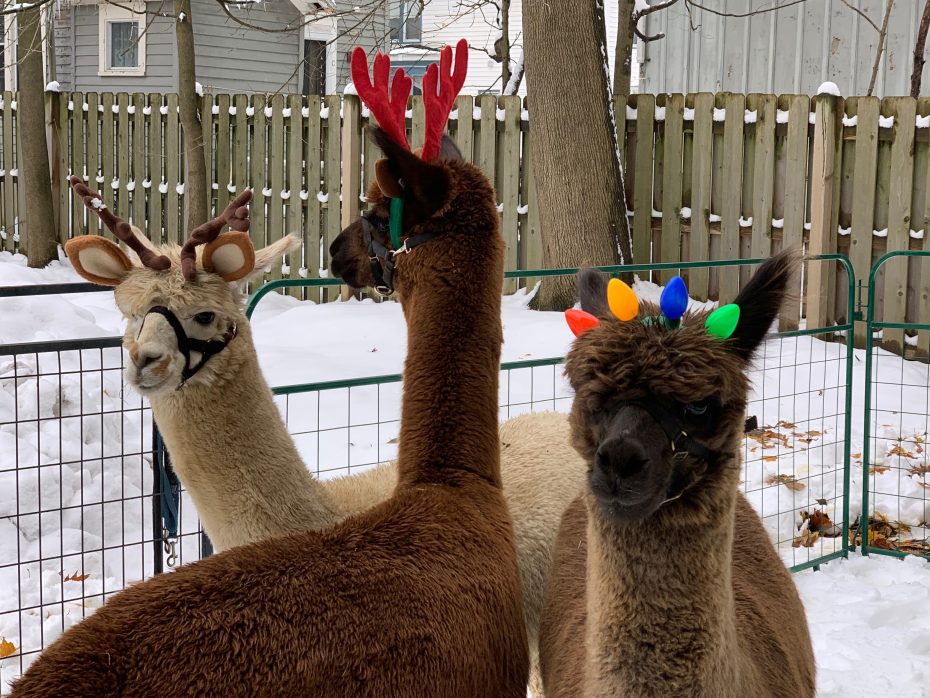 Elbert, Roycroft and Anakin are more fun at holiday parties than you.

Alpacas are a man-made animal from South America, historically valuable for their wool. Their history is ambiguous, but they branch from vicunas, llamas and guanaco, all a part of the camelid family.

In the 1980s, the United States started allowing in a select amount of alpacas. Original investors spent thousands on the animal and their value remained high through the early 2000s. Brad said a pregnant female alpaca sold for around $15,000 when they first got into the business. Online sources said they could go up to $75,000 each.

Then people started buying alpacas to make money, selling babies for profit and dramatically decreasing the worth of the animal. The alpaca market burst, according to a study by the Giannini Foundation of Agricultural Economics called “The Alpaca Bubble Revisited.”

People left the alpaca business and the animals suffered.

“It became very clear that there were animals who were suffering from neglect. We started rescuing," Jeanne said, breaking off in mid-conversation because a couple of extremely cute alpacas came up, demanding attention.

“Hi buddy,” she said in an affectionate, high-pitched voice. “This is Willie, this is Yetti." Oh yeah, all 67 have names.

The Langs started to gather neglected animals in New York, Pennsylvania and Ohio, serving as a halfway house between an animal rescue in Albany called Albany Alpaca 911. But sometimes, they kept them. Their goal is to rehabilitate the animals and move them to other farms that will care for them.

They started vending each weekend to help cover the costs of nursing them back to health (they’re often nutritionally depleted and have parasites) and running the farm.

"So, we take our little trailer and we go all over with alpacas and product,” Jeanne said.

Every May, they hire a shearer and enlist their family to help with the shearing process. Once the animals are sheared, the fiber is graded, then sent to New England Alpaca Fiber Co-op in Massachusetts, where it’s mixed with fibers from other American alpaca owners’ herds. They buy it back and sell it on their mobile cart at festivals, concerts and even bars.

When Hydraulic Hearth asked them to bring alpacas to an event, Brad said his first reaction was to ask: "Well, you sure you’re not drunk?"

They weren't. They serve the Alpaca Porter beer by Community Beer Works. For the last few years, the Thistle Creek Alpacas are the main attraction of a popular Alpaca Night at the downtown bar (2,000 people said they were "interested" in this year's September event on Facebook). They even have an alpaca named Larkin who attends Larkin Square events.

She’s not the only alpaca with a local name. There’s Kensington, Scajaquada, Larkin, Elbert and Roycroft.

“If we go out to shows, it’s a way to take a little bit of Buffalo with us,” Jeanne said. 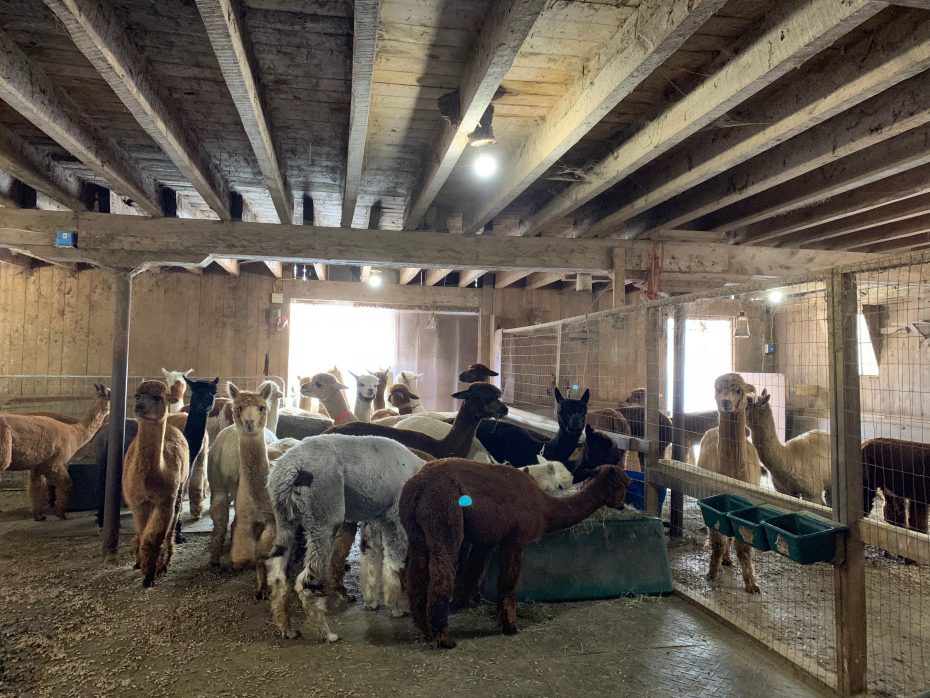 Thistle Creek Alpacas is home to 67 alpacas and each one has a name.

At the Roycroft holiday market, Brad guarantees some people will remember when their alpaca named Roycroft was born on the Roycroft Campus to a crowd of around 60 curious onlookers.

“Still, when we go to the Roycroft, there are people that will come up and say, ‘Where is Roycroft?’ ” Jeanne said.

At the holiday show, Roycroft stood wearing red antlers and jingle bells next to his two friends, Elbert and Anakin. They were doing nothing but standing there, as alpacas do. That's pretty much all they ever do. But boy, do they look cute doing it.