Dinorah Santos, a grandmother who decades ago came to Buffalo from Puerto Rico, said the first time she saw the new Christmas lights along Niagara Street, she began to cry.

Roger Rivera, who lives on that street above his Genesis Christian Store, said he sometimes sits by a second-floor window to simply contemplate the illuminated stars, candy canes and even palm trees that run in streetlight intervals toward City Hall and the towers of downtown.

And Raul Hernandez, co-owner of the Niagara Café on Niagara Street, said the lights – and the new yuletide celebration they inspired – have brought him back to a feeling about Christmas that was shrouded since he lost his father two years ago.

“This is something very special,” said John Sanabria, a General Motors retiree and a board member with the Hispanic Heritage Council of Western New York. Not long ago, he spent two “cold and windy” days assisting city crews who installed the lights in the heart of the city's Hispanic Heritage District.

To Casimiro Rodriguez Sr., president of the Heritage Council, it is another signal of a continuing transformation. A long list of donors helped the council raise about two-thirds of the $30,000 cost for decorations.

While Rodriguez likes the idea of a holiday greeting for travelers leaving the Peace Bridge, he said the greatest benefit is for neighborhood children, many within a Puerto Rican community that numbers around 35,000 in Buffalo.

The lights also serve as a kind of yuletide necklace for a neighborhood in transition. Niagara Street is experiencing a new burst of investment, such as Dr. Raul Vazquez's $6 million Greater Buffalo United Accountable Healthcare Network facility.

Amid such change, Rodriguez said it is important for the six-block heart of the area known as the Hispanic Heritage District to project a sense of place and identity, a civic personality that he feels went unclaimed for too long.

The lights, Rodriguez said, are included in a wave of new touchstones within the piece of Niagara Street known as the “Avenida de San Juan.” Over the past few years, the Heritage Council has added Puerto Rico-themed murals, parapets, arches and even a Verdin clock, all intended to kindle identity and purpose.

Saturday, as part of that movement, the Hispanic Heritage Council is hosting a "Parranda Buffalo" at 5 p.m., a local version of the passionate house-to-house, instrument-shaking caroling that is both a rolling celebration and a yuletide hallmark in Puerto Rico.

In a way, Rodriguez said, the event is arriving here a little early, since a true parranda traditionally peaks at the Epiphany – the day associated in the Christian faith with the arrival of the Three Kings. 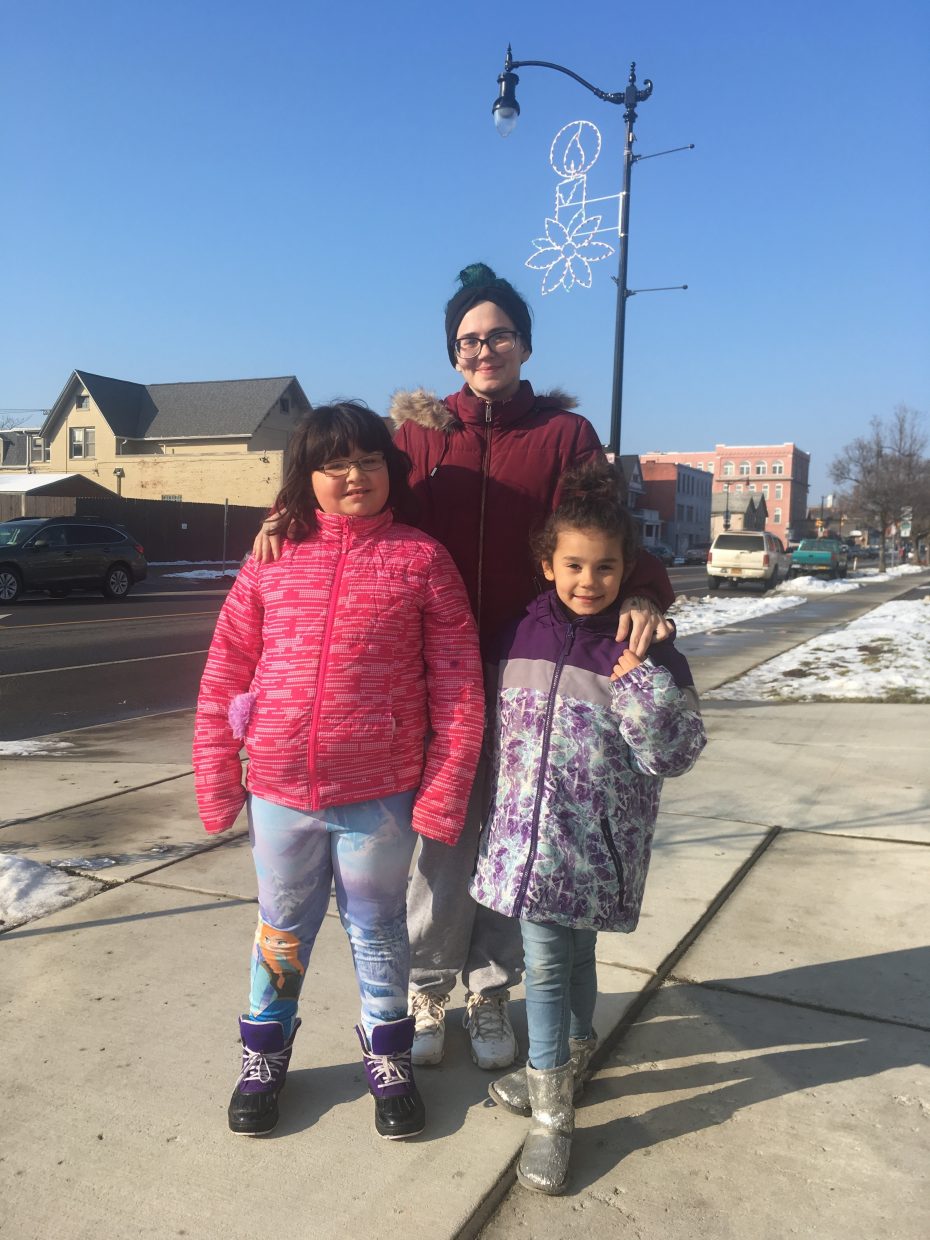 Raul Hernandez, who has operated his Niagara Street restaurant with his wife Maria for almost 40 years, said a parranda is also intertwined with a kind of joyous, forget-old-slights reconciliation.

That celebration always reminds him of Angel Hernandez, his father, best known as "Luca." He was the heart and soul of a yuletide gathering that always went deep into the night at the restaurant. Since Luca's death in 2016, Raul said, it has been hard to imagine Christmas without him.

Still, he and Maria agree that the beginning of this celebration helps Raul to find a kind of holiday peace:

By embracing the parranda, Raul honors his dad.

Rodriguez spoke with gratitude of how Saturday's sequence of events involves the help of the Per Niete Club, a neighborhood ally that celebrates Italian-American culture on the West Side.

He believes many children will share the reaction of 7-year-old Julia Sumler, who paused Thursday to admire a snowflake decoration as she walked along Niagara Street with her sister, 9-year-old Natalie Rodriguez, and their mother, Shannon McCurdy.

“They’re pretty,” Julia said, which basically summed it up.

Dinorah Santos has spent decades doing community work on the West Side. Her 5-year-old granddaughter greeted her this week with an excited description of the lights. It only reaffirmed why Santos found herself in tears the first time she saw them, in full illumination.

"Oh, my God," she said. "I've never seen Niagara Street with so much life."

By next year, Rodriguez said, the Heritage Council hopes to sponsor a community Christmas tree and a storefront window competition. All of it revolves around a truth he realized long ago: In many city neighborhoods, traditions – especially yuletide traditions – become a galvanizing force.

He vividly recalls childhood Christmases in Lackawanna, where his father – who originally came to Western New York as a farm laborer – chose the more stable life of a steelworker at Bethlehem Steel.

Rodriguez had 12 siblings. Money was tight, and his parents emphasized the breakout meaning of an education. To Rodriguez, an especially important memory of Christmas involves the way a guy named Freedman, a friend of his dad's from the steel plant,  would always show up with a tree and gifts.

That template of kindness stays with Rodriguez. When he was 12, his family joined the growing Puerto Rican community on Buffalo's West Side. Rodriguez graduated from Grover Cleveland High School, attended the University at Buffalo and eventually spent 33 years at the GM plant. Retirement only amplified his chance to encourage tradition, and thus cohesion, within the blocks bordering Niagara Street.

In the late 2000s, when Rodriguez served on the Erie County Cultural Resources Advisory Board, he began to fully appreciate how other neighborhoods used their heritage as both a beacon and a catalyst. 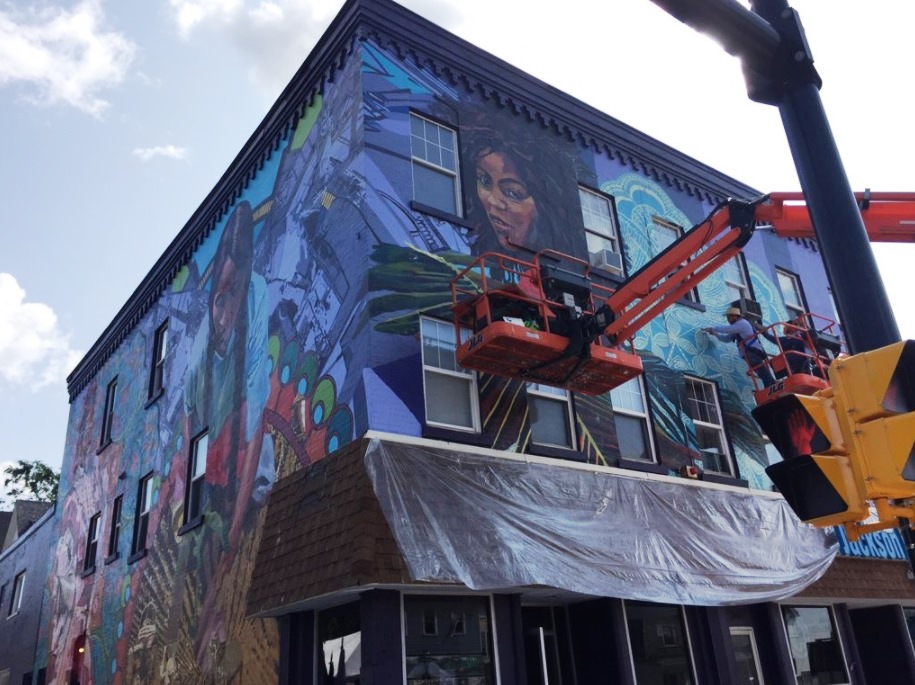 What his community was missing, Rodriguez said, was the power of its story.

He thought of his parents, their journey from Puerto Rico, the toil in fields and factories. While that experience was shared by countless friends, it seemed to Rodriguez that his neighborhood did little to spotlight such a binding narrative – which left too many children separated from a sense of who they are.

"We are part of the fabric in this city,” said Rodriguez, who joined others within the Hispanic Heritage Council in seeking vibrant ways to tell the tale.

Michele Agosto, a Heritage Council vice president who supervises arts education for the Buffalo city schools, coordinated last summer's painting of a mural that tries to invoke the sense of a civic voyage. It will be the starting place for Saturday’s Parranda.

Agosto arrived in Buffalo 25 years ago as a college student from New York City. She reaffirms the point made by Rodriguez: For years, she said, the Puerto Rican community in Buffalo struggled with finding a sense of place. Now, she said, it is coming together quickly, with the Christmas lights as one especially dramatic flourish.

“I really hope people go home Saturday feeling connected to their roots in a place that feels very familiar, the same place that at one point felt so unfamiliar,” she said.

At the Genesis Christian Shop, Victor Torres – a handyman who sometimes helps Roger Rivera with repairs – sees it in a fundamental way. To him, Niagara Street is finally capturing an almost mystical city emotion, one capable of changing the nature of your day.