Patricia Myers suspected the staff at the Buffalo nursing home was not feeding her bedridden husband.

When she shaved him, he sometimes tried to eat the shaving cream.

"Are you hungry?" she asked.

Paralyzed from a degenerative neurological disease, Larry K. Myers managed to yell one of the few words he could still speak: "Yeah!"

His wife said she complained repeatedly to the nurses and supervisors at HighPointe on Michigan. But nothing changed. Myers was losing weight and dehydrating.

The camera recorded workers "walking in and walking out" of the 56-year-Myers' room without helping him, according to attorneys at Brown Chiari, who represent Patricia Myers in a civil lawsuit against HighPointe and Kaleida Health, owner of the nursing home.

Certified nursing aides did not give him fluids. He depended on them for not only hydration, but nutrients from food that had been liquefied, according to his medical records. CNAs also failed to change his soiled briefs.

As for nurses, they, too, ignored their duties. They did not check on his condition or provide him with pain medication.

Myers, of Orchard Park, died at HighPointe on Jan. 9, 2014, from Huntington's chorea, the disease that had robbed him of mobility and left him totally dependent on the nursing home staff. The neglect he experienced, his wife and her attorneys say, caused him unnecessary agony.

Four months after his death, 17 HighPointe nurses and CNAs were arrested, charged with neglecting him and falsifying records to hide their neglect. In the charges, Myers was only identified by his initials "L.M.," out of respect for his family's privacy.

Now, Larry Myers' name – and the story behind the arrests – is being made public for the first time by his widow.

Patricia Myers says she continues to experience heartbreak and outrage over how her husband of 33 years was treated. She wept from time to time during an interview with The Buffalo News while offering her first public comments on the case.

"To this day it still haunts me. Is there anything I could have done? My sons say you did everything you could," said Myers, the mother of three grown sons. 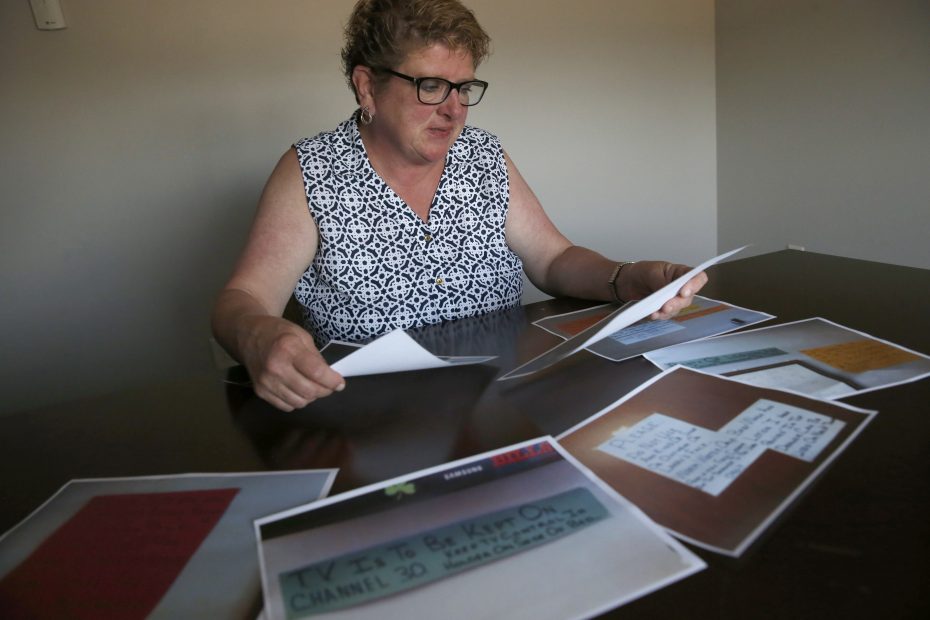 Patricia Myers talks about the poor care given to her husband, Larry, at HighPointe on Michigan nursing home in Buffalo. Seventeen nurses and certified nursing assistants were charged with crimes in 2014 for neglecting him and falsifying records. Larry Myers died at the nursing home on Jan. 9, 2014, months before the arrest. (Robert Kirkham/Buffalo News)

Michael Hughes, a Kaleida spokesman, said he could not comment about the Larry Myers case because of  medical confidentiality laws and the pending lawsuit.

The federal government has rated HighPointe a two-star, or "below average," nursing home every month since January 2013 – except for a month where it received no rating.

HighPointe has hired the equivalent of 75 full-time workers, replaced 85 percent of its management and changed 60 percent of front-line staff, the spokesman noted. The nursing home now gets four out of five stars for staffing. It has increased its rating for the quality of care from two to five stars.

HighPointe's record also includes fines totaling $33,318 by the state and federal government for violations in recent years, the seventh-highest total among the 47 nursing homes in Erie and Niagara counties.

Larry K. Myers, who was paralyzed by Huntington's chorea, lies in bed at HighPointe on Michigan in an undated photo before his death on Jan. 9, 2014. (Provided by Patricia Myers)

How he arrived at HighPointe

Myers progression into the neurological disease started in the late 1980s after he began experiencing difficulties with routine tasks, such as opening a door.

"One morning I saw Larry struggling on how to figure out putting the car in reverse. When I told him I didn't think he should drive anymore, I think he was relieved," Patricia Myers said.

In describing Huntington's chorea, she said it's "a mixture of Lou Gehrig's disease and Parkinson's disease and that's like a death sentence."

An avid golfer who loved the Buffalo Bills and Cleveland Indians, the insurance salesman was soon confined to his home.

As his condition worsened, Patricia Myers placed him at Deaconess Center, a nursing home operated by Kaleida. When that facility closed in December 2011, she agreed to transfer her husband to Kaleida's newly opened HighPointe.

One of the people who gave her a tour of HighPointe was James R. Kaskie, president and chief executive officer of Kaleida at the time, she said.

With Kaleida's top executive showing off the state-of-the-art facility, Myers felt certain her husband would be well cared for by the staff at the 300-bed nursing home.

The neglect she witnessed

"There were so many times I would go in his room and he was literally soaked and his bed was soiled," she said. "The first thing I would do was give him a sponge bath and a shave. He'd try to eat the shaving cream."

She says she would feed her husband, a task that required time. If he was fed too quickly, he would regurgitate his food.

During one visit, Myers said she discovered someone had turned her husband's pillow over to hide food he had regurgitated.

On a number of other visits, she said, there would be untouched food on a tray beside her husband's bed.

"I pleaded with them that if you are ever short-staffed, call me and I'll leave my job and take care of Larry," she said.

Patricia Myers, who had worked as a school bus driver, placed notes on the walls of his room: "Plenty of liquids are to be given throughout the day." In another, she asked that a blanket be kept on him "if Larry is cool to the touch, especially his legs." Another note listed her cellphone and work numbers. If he became ill, it stated, "I Am To Be Called IMMEDIATELY!!!"

All of this, she explained, was done because of her worries that the staff was failing to meet his needs.

Brown Chiari attorney Michael C. Scinta pointed out that though Myers could not move, he knew what was happening around him.

"While he could not move or communicate, he was aware that food that had been pureed and placed in front of him and not fed to him by the staff," Scinta said. "As well, water would sit in front of him without the glass being lifted to his lips."

Concerned over her husband's weight loss, Patricia Myers said she spoke with his doctor. "The doctor said he was surprised he was losing weight because it was charted that Larry was getting all his nutrients," she said.

His wife estimated he lost as much as 75 pounds during his three years at HighPointe.

And that was not her only concern.

Patricia Myers also began placing a dot with a permanent marker on her husband's bedding to determine if it was being regularly changed. She also started looking under her husband's bed where she would find his "soiled briefs."

Patricia Myers said she started complaining to the head nurse on her husband's floor. When that achieved no results, she said she went to that nurse's supervisor and complained.

"I ended up going to the assistant administrator and then the administrator of the nursing home," she said of face-to-face meetings that yielded no improvements.

Myers says she called the director of nursing for all of Kaleida twice and nothing happened. Finally, she telephoned Kaskie.

"I never got a return call from him," she said. "I kept stumbling into a brick wall."

On June 11, 2013, AG investigators placed the hidden camera in Larry Myers' room. It was an unusual move. In the last decade, the AG has made arrests of nursing home employees using hidden cameras only three times in the Buffalo area and approximately another 10 times across the state.

His wife was told the camera would be recording in her husband's room at HighPointe for approximately 30 days.

"After about two weeks they called me and said they had seen enough," Patricia Myers said.

The video showed that the CNAs and nurses assigned to take care of her husband had lied on nursing home records that indicated they had given him fluids, fed him, changed his soiled briefs and checked on his condition.

In late April 2014, the 17 HighPointe workers were arrested and arraigned. One registered nurse, seven licensed practical nurses and nine CNAs were charged with falsifying business records, endangering the welfare of an incompetent or physically disabled person, both felonies, and with willful violation of public health laws. 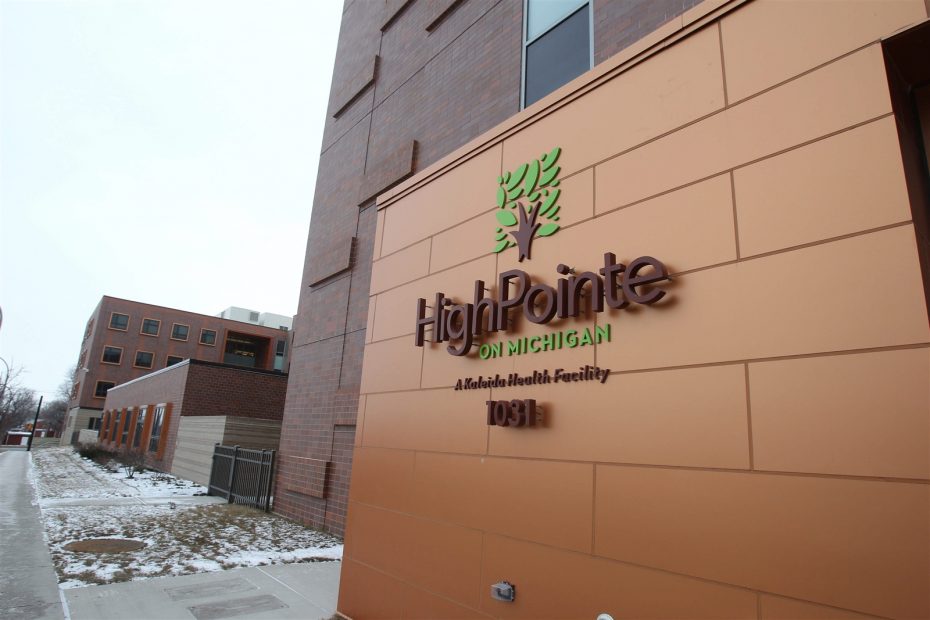 "When I saw some of the nurses and aides, I felt like someone had stabbed me right through the heart with a dagger. I would have trusted them with my life," Patricia Myers said. "I went to every single court proceeding because I wanted them to see me. I wanted them to know that I knew what they had done to my husband, to me, and our sons."

The workers, who were all fired by Kaleida, pleaded guilty to misdemeanors and violations. Most were sentenced to perform community services. One CNA was sent to jail for 15 days.

New York State issued no fines against HighPointe related to its care of Larry Myers, according to a search of Department of Health records.

Patricia Myers' lawsuit, filed in 2015, alleges that her husband suffered from dehydration and malnourishment, significant conscious pain, mental anguish and loss of dignity.

But Don Chiari, a partner at Brown Chiari, says that while the workers failed to perform their jobs, their employer created the situation by having inadequate staffing, training and policies to make sure Myers received proper care.

"There were 17 caregivers who were fired and pleaded guilty to falsifying care records. But the Myers' family lawsuit is about more than that. It's about holding others accountable and responsible – the managers, the supervisors and most importantly the owners.

"They can't hide behind their employees' guilty pleas and wipe their hands of it. They need to recognize that it's their failures that caused the criminal conduct," Chiari said.

Gibson, McAskill & Crosby, attorneys for HighPointe and Kaleida, have denied the allegations. They also blamed Myers for what happened, citing in court papers his "culpable conduct," an apparent reference to his disease.

While the lawsuit continues to makes its way through State Supreme Court, there was fallout at HighPointe in the months after the workers were charged.

Michael Murphy, HighPointe's director of long-term care, and Mary Alice Cislarski, the nursing home's director of nursing, were removed from their positions. Kaleida Health officials said the changes were made to address the allegations of neglect.