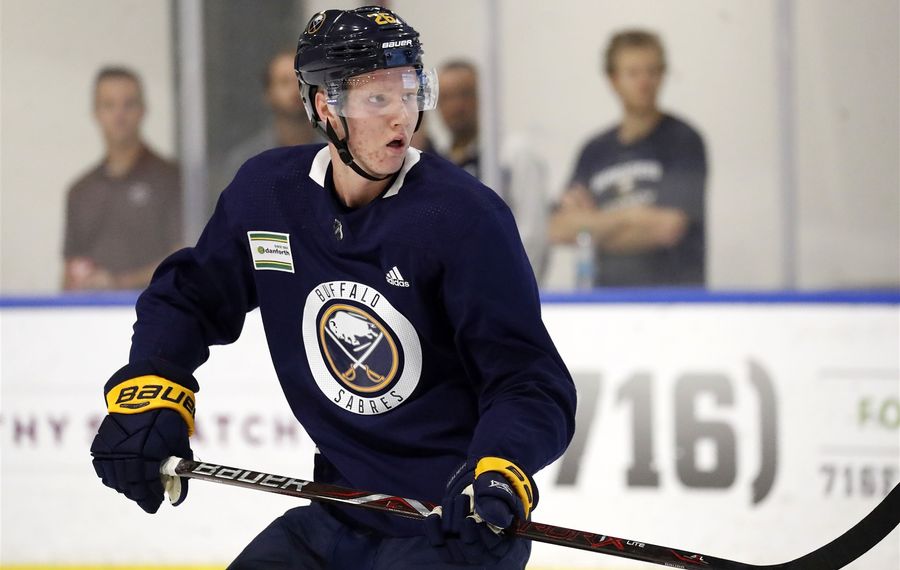 The Buffalo Sabres’ rookie defenseman was firing one-timers on the right flank of the power play, and unloaded four in one second-period stretch in what turned into a 4-3 overtime victory against the Los Angeles Kings on Tuesday night at KeyBank Center.

At the time, the Sabres trailed by one goal. Three of Dahlin’s shots sailed wide of the net. The other was stopped by Kings goalie Calvin Petersen.

Dahlin ended the power play by leaning on his stick and snapping it half.

“When you can’t score, it’s pretty tough,” Dahlin said after practice Wednesday. “So, yeah. Bad stick, so I wanted a new one. So I broke it.”

Dahlin was a beast for much of the game against the Kings, though he was burned on a goal by Matt Luff in the first minute of the second period.

Dahlin had 13 shot attempts, eight of them on goal. He blocked three shots and had three giveaways in 28:34 of ice time, including just over 10 minutes on the power play.

The Sabres scored on two of eight power-play opportunities, rallying from a two-goal, third-period deficit to end their five-game winless streak.

Jack Eichel and Johan Larsson scored in the third period to tie the game and Jeff Skinner scored on the power play at 1:49 of overtime, giving the Sabres their first victory since Nov. 27.

Dahlin has two goals on 58 shots and has 12 assists in 31 games since the Sabres selected him with the No. 1 overall pick in the draft.

“His development has been pretty quick,” Eichel said. “You see some of the stuff he does on the ice and it’s just, we in the room laugh about it when he does stuff, and to think he’s only 18 years old, he doesn’t even know how good he is, to be honest with you. We realize it and we know how good he’s going to be, but he’s just getting better every day. He’s such a good kid and he works hard on the ice. He’s got a great attitude. We couldn’t be luckier to have him.”

Dahlin Effect is helping Sabres' defense pump up their numbers

“He wants to do the right things, he’s coachable, he wants to win and he expects a lot from himself,” Housley said. “But at this point, I really like where his development is. He’s getting more and more comfortable with our game, the North American game so to speak. He’s attacking the game in the right way. He’s trying to create.

“I just think some of the things through his development, his decisions with the puck, I think he’s got to be harder with it, make stronger, harder passes. Sometimes he throws it to areas, and that’s just part of his development. But for the most part, I’m really happy where he is.”

Dahlin also drew attention Tuesday night for carrying the puck the length of the ice, controlling it from behind his net to behind the Kings’ before looping around and returning to the blue line, waiting for a play to develop.

Dahlin brushed it off as no big deal, saying “nothing really happened,” but Eichel said that as Dahlin has become more comfortable in the locker room, it has translated to the ice.

“I think he’s more comfortable around the guys,” Eichel said. “When he came in here, he was a little bit shy and didn’t really talk too much, didn’t say a whole lot. I think the more comfortable he’s gotten, you’ve seen it in his game. Some of the stuff he does out there is pretty remarkable. And he’s doing it against some of the best players in the world.

“I just think he’s gotten comfortable with the guys in the room and I think that’s been important for him, a young kid, just trying to make him feel at home. It’s obviously a huge transition for him and I think he’s made it pretty flawlessly. It speaks to his character and his personality.”

After Dahlin broke his stick, Rasmus Ristolainen joked with him on the bench, trying to keep the mood light and ensure he remained focused.

“I don’t even remember what he said,” Dahlin said, “but he made me feel good again. … I wasn’t angry after he joked.”

He said that helped a great deal.

“That’s what teammates are for,” Dahlin said. “When one man is down, make them happy again.”

“It wasn’t a bump-and-grind type of practice, but I liked him when he was out there, moving the puck, getting involved, a little physicality at the end there,” Housley said. “It was good to see him in a good practice.”

Scandella said he has no timetable to return to game action, but Housley said there’s a possibility he will play this weekend.

Scandella, who played in all 82 games last season, has been out since Nov. 24.

“We were on a winning streak when I got hurt,” Scandella said, “so you never want to leave when everything is going well and being a part of something special. It was tough, and I’m just trying to get back right now.”

There’s a “possibility” that goalie Carter Hutton will start against Arizona on Thursday, Housley said.

Hutton sat out Saturday’s loss to Philadelphia with an “upper body injury” and backed up Linus Ullmark against the Kings.

“He’s in a good spot, but we’ll talk to the trainers and see where he is,” Housley said.

Kyle Okposo and Ristolainen received maintenance days and did not practice Wednesday.

Remi Elie replaced Okposo on a line with Casey Mittelstadt and Conor Sheary.

Patrik Berglund, who has been sick, did not practice.