After being ignored for decades, the hulking Connecting Terminal became the canvas for a nightly light show three years ago on the Outer Harbor that could be seen from a distance.

Now, people might get an even closer look at the 1915 grain elevator.

They might be able to walk inside a silo or even view the city skyline from the grain elevator's rooftop.

Reusing the grain elevator has emerged as part of Erie Canal Harbor Development Corp.'s strategy to bring more activity and amenities to the Outer Harbor. The agency's plans involve remaking First Buffalo River Marina, which the state agency took ownership of in 2016 from the New York Power Authority.

Under variations of three proposals, the public could enter the lower level of the behemoth, 100-plus-feet-tall grain elevator and the 1954 annex alongside it. Plans call for looking out from a rooftop viewing deck on one or both of the concrete structures, with views of the city, Lake Erie and the Buffalo River. A rooftop restaurant is a possibility.

The idea behind the Connecting Terminal concept is to let the public interact with the grain elevator and learn about its history through some historical interpretation, said Steven Ranalli, Erie Canal Harbor's vice president of waterfront development.

"We want to accentuate the history of the grain elevator, without complete homage to it," Ranalli said. "People will say, their careers are built on the shoulders of giants. To me the whole waterfront is metaphorically built on these great shoulders." 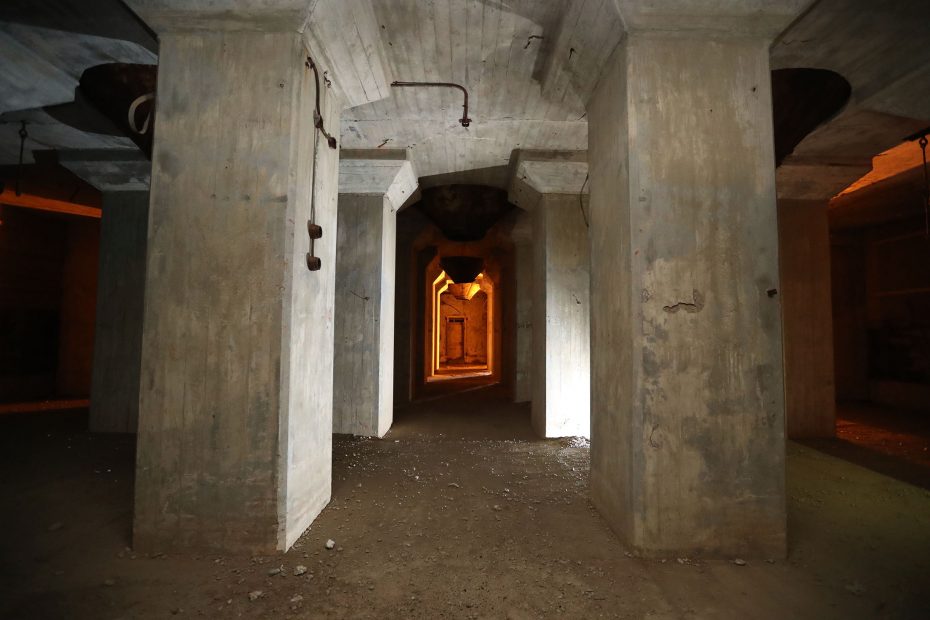 A look inside the Connecting Terminal. (Sharon Cantillon/Buffalo News)

An open house last month presented options for three sites on the Outer Harbor: an area nearly 150 acres stretching between the Bell Slip and Wilkeson Pointe; the 15 acres around Terminal B, a vacant building at the southern end of the Outer Harbor; and the 16-acre marina.

The ideas being considered for the marina include a boardwalk, summer promenade, play beach, playground, woodland garden, riverbank lawn and ecology center.

The marina would continue to serve boaters, with winter boat storage moved south of the Connecting Terminal, as well as two sites currently used off Fuhrmann Boulevard. Dry dock facilities, where repairs are made, would be removed to open more land to the public.

Also under consideration is a new route for the Queen City Bike Ferry: between the foot of Main Street, by the DL&W Terminal, and the northern side of the Connecting Terminal.

Interpretive text panels and a welcome center with food and beverage vendors are being considered for the grain elevator, Ranalli said.

The grain elevator does not appear to have been used since the 1970s. 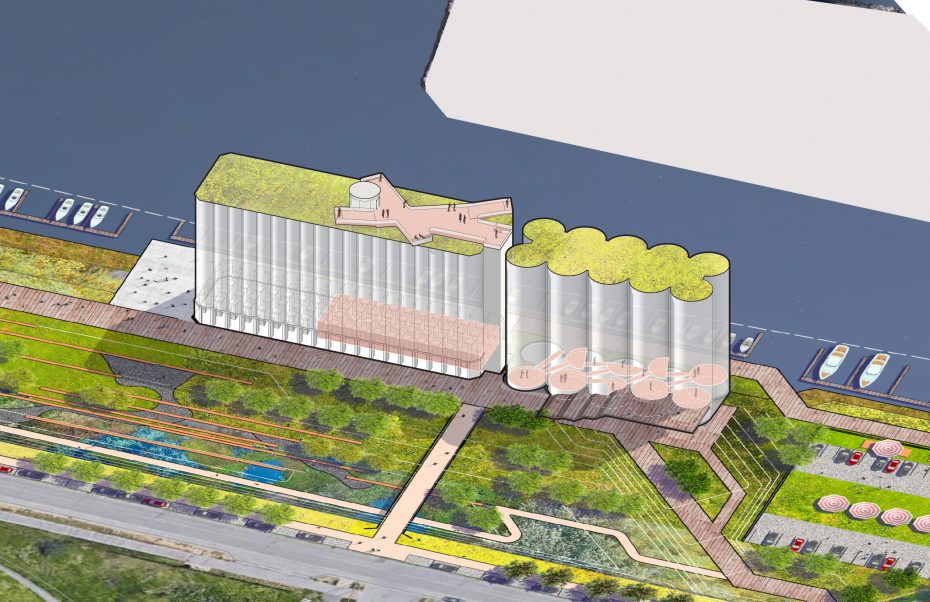 There are no thoughts to making the site a full-scale museum, Ranalli said. The outdoor Industrial Heritage Trail, located a mile south along Fuhrmann Boulevard, tells the story of Buffalo's grain elevators.

That could change, depending on what the public wants to see, he said.

"While we are leaning toward rehabilitation of the grain elevator, and not restoring the missing elements to that big of a degree, we want to see where the public is on that," Ranalli said. "We do think it's important to highlight and explain the industrial heritage of the waterfront. The question is what that will be, and how we phase it in over the life of the project."

Public comment can be made on proposals for all three areas of the Outer Harbor through an online survey available through Dec. 23. Go to outerharborbuffalo.com and click the access and activation link.

Two consultants — nARCHITECTS from New York City and OLIN, landscape architects from Philadelphia — are part of the design team working with the waterfront agency.

Grain elevators have opened to the public in recent years for artistic performances at Silo City, as outdoor entertainment at Buffalo Riverworks and as office space at the former Buffalo Malting Corp. by Young + Wright Architectural.

Lorraine Pierro, president and co-founder of the Industrial Heritage Committee, established in 1986, welcomes plans to reuse the grain elevator.

"This is what's needed to interpret and explain the history not only of the grain elevators, but the entire area," Pierro said. "I am very pleased with what I've seen. I just hope this comes to fruition."

Pierro said she is also glad the waterfront agency is considering opening the roof.

"We've long championed the idea of using the roof for a viewing deck," Pierro said.

Pierro said the exteriors of the structures need a cleanup.

The Connecting Terminal and the Skyway. (Sharon Cantillon/Buffalo News)

"We have long advocated to paint or refurbish the Fuhrman Boulevard side of Connecting Terminal," Pierro said. "It's kind of unsightly, actually, and in the summertime the sun makes it look worse."

The Industrial Heritage Committee was responsible in the early 1990s for getting the National Park Service to conduct a series of Historic American Engineering Record reports on Buffalo's grain elevators, including the Connecting Terminal.

"These buildings influenced the world of architecture, but technically they are actually large pieces of machinery, which makes them unique," Pierro said.

"I love them from the engineering side of it. For me, they're these giant machines, frankly. It's just unworldly in here," Ranalli said on a recent walk-through inside the basement of the original building.

A half dozen rows of around 100 cement columns are aligned on the basement level, and metal funnels serve as a reminder of how grain from the silos above would have been dropped onto a conveyor system.

The 1954 annex next door offers more limited space for viewing, due to technological changes that occurred over the previous 39 years. 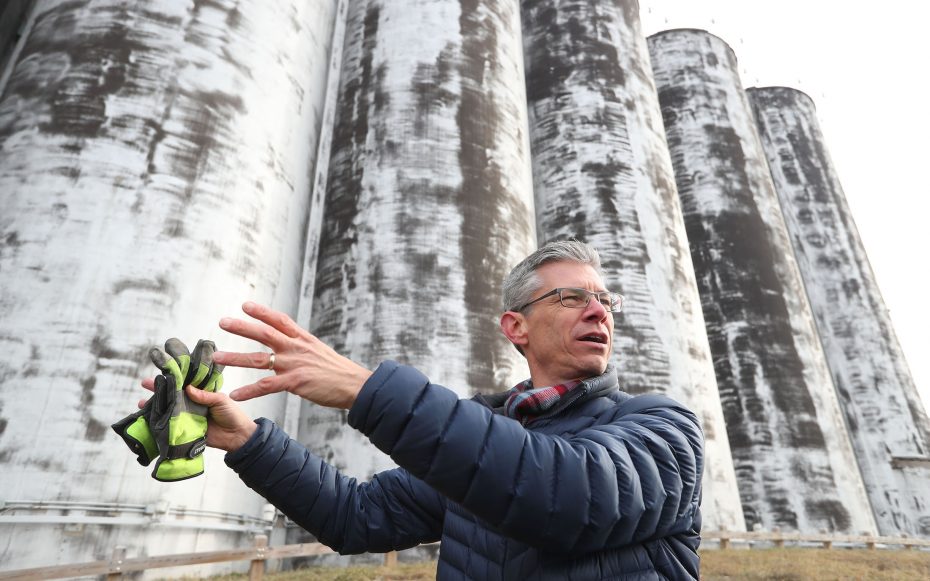 Ranalli pointed to boarded-up exterior areas where he said glass or garage doors could be used to allow natural light to enter. Using a glass top on the viewing deck, at least in select places, would allow the public to look down into the silos, he said.

A study will be done to see if a restaurant can be built at an affordable cost.

Ranalli said he expects the grain elevator to be reused.

That's good news to Lynda Schneekloth, professor emeritus of the University at Buffalo School of Architecture and Planning.

"I think it's a great idea to reuse the silos," said Schneekloth, who edited "Reconsidering Concrete Atlantis: Buffalo Grain Elevators."

"I think the proposals were very responsible of the grain elevator as an historic structure," she said. "Generally speaking, opening the bottom level is fantastic. It's just beautiful in there, and to reuse the structure makes all the sense in the world."

Schneekloth also likes the idea of installing an elevator to take people to the roof. But she doesn't like the idea of a restaurant, fearing it would bring lights that interfere with the thousands of birds migrating along Lake Erie and the Niagara corridor.