Understaffing is a common problem in many of the worst-rated nursing homes in Western New York.

Residents in these facilities often must wait long periods to be taken to the bathroom, have their diapers changed or receive assistance in being fed, according to their relatives.

A proposed state bill would require nursing homes and hospitals to maintain specific minimum staffing ratios for nurses and certified nursing assistants. At present, these facilities are required only to have “sufficient" staffing levels.

The bill, which passed in the Assembly in 2016 but was not voted on by the Senate, is expected to gain more support when Democrats take control of both chambers next year, according to two legislators representing Buffalo.

Under the bill, each nursing home's registered nurses, licensed practical nurses and certified nursing assistants would have to spend a total of 291 minutes a day with each resident, on average.

Only 49 of the 619 nursing homes in New York State — or 8 percent — now meet the proposed law's ratio, according to data from the federal Centers for Medicare and Medicaid Services.

And HighPointe on Michigan, a nursing home owned by Kaleida Health, is the only nursing home in Erie and Niagara counties now meeting that standard.

Known as “Safe Staffing,” the legislation has the support of the powerful Service Employees International Union, which has contributed millions of dollars to politicians across the state.

Opposing the measure are trade groups representing nursing home operators and hospitals, who claim it would cost an extra $1 billion annually, with taxpayers covering the hike through increased Medicaid payments.

The bill does not include an estimate on how much minimum staffing ratios would cost, but its sponsors say possible Medicaid rate increases could be “balanced by reduced Medicaid spending as reduced bad outcomes and reduced staff turnover reduce health care costs.”

Minimum staffing ratios are necessary to ensure quality health care in the region’s nursing homes because many of them have been sold to for-profit companies, said Assemblywoman Crystal D. Peoples-Stokes, D-Buffalo, a co-sponsor of the bill.

“Your bottom line becomes more important. You do things to keep your budget in order and that might not always be in the best interest of residents,” said Peoples-Stokes, who said she believes there will be increased attention to the bill in 2019. “I think it is a conflicted model to say you can have a for-profit business that delivers quality care for the people who are least able to do for themselves.”

In the last decade, 16 of Erie and Niagara counties' 47 nursing homes have been acquired by New York City area investors. Six of the 16 homes score poorly in staffing by the federal Centers for Medicare and Medicaid Services.

But Safire Rehabilitation of Southtowns on Dorrance Avenue in Buffalo stands out. It has the lowest ratio of nursing staff minutes spent with residents per day among the local nursing homes and is also among the lowest statewide, according to federal government statistics.

RNs, LPNs and CNAs at Safire Southtowns spend 140 minutes per day with each resident compared to the state average of 226 minutes and national average of 234 minutes. The gap is even wider when looking at the time spent with each resident by registered nurses at Safire Southtowns. At 17 minutes a day, it is far less than the state and national averages of 42 and 41 minutes.

"You go there on the weekend and there is no help," said Candy Cutrona, whose 87-year-old father, Robert Thompson, has been a resident at Safire Southtowns for more than five years. "I say, 'Who is feeding the residents? Who is taking care of them?' "

She visits her father daily for about five hours, Cutrona said, and the staff often leaves him in soiled diapers for long periods.

The Centers for Medicare and Medicaid Services rates Safire Southtowns' staffing at one star, “much below average,” the lowest rating in its five-star system.

“We welcome ideas and support on how to solve the staffing problem, but urge everyone involved to consider the funding levels that will be necessary to change the staffing level picture in New York State,” said Michael Balboni, a spokesman for Safire Southtowns' New York City area owners.

In Erie and Niagara counties, the average Medicaid rate paid to nursing homes is $229 a day, which is approximately $100 less than the average daily rate in this region for a room in a facility, according to state figures.

Politicians for and against ratios

State Sen. Timothy M. Kennedy, D-Buffalo, a co-sponsor of the bill, says minimum staffing ratios are necessary to improve the quality of care for residents and working conditions for nurses and CNAs.

“I worked as an occupational therapist in nursing homes and the things I have seen with my own eyes I hope never happen again,” said Kennedy, who took aim at for-profit nursing home operators. “They cut back on staff and ultimately the care residents are getting to boost up their bottom line. The bad actors need to be called out and I think this legislation will do that.”

But State Assemblyman Robin L. Schimminger, D-Kenmore, does not believe the state should tell nursing homes and hospitals how to run their operations.

“I think staffing should always be safe, but do I think that Albany should dictate staffing in hospitals and nursing homes by a one-size-fits-all formulation? Then no, I do not support such a dictate from Albany,” he said.

In addition to questioning how the requirement would be funded, Schimminger said the proposed legislation does not adequately take into account the varying levels of patient and resident needs at hospitals and nursing homes.

“The community-based hospitals and nursing homes are in the best position to ensure safe staff, not big brother in Albany,” Schimminger said. 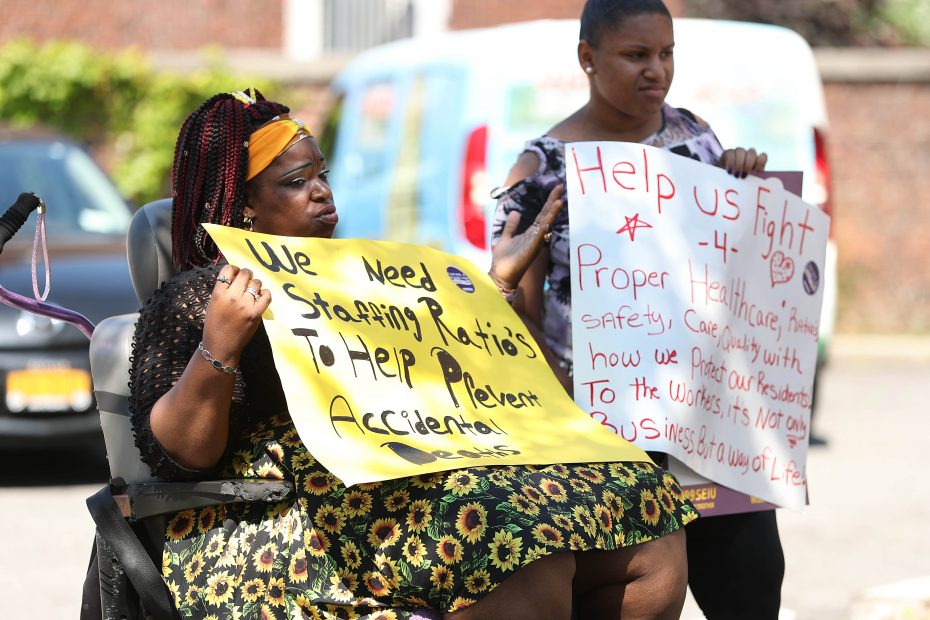 Emerald South nurse Kyonia Saffron, left, holds a sign supporting a bill that would require nursing homes to meet minimum staffing requirements. Saffron and other workers protested outside the Buffalo nursing home following the June 4, 2018, death of resident William Strasner, who fell from a third-floor window. Saffron said her osteoarthritis has worsened because of understaffing at the home. Her daughter, Jazmen Van Volkenburg, protests with her. (Sharon Cantillon/Buffalo News)

Helen Schaub, an official with Local 1199 of the SEIU, which represents 40,000 nursing home workers in the state, said union members face unrealistic workloads and are frustrated that they cannot provide the quality care they know residents require.

“We fundamentally believe that there is a staffing problem in nursing homes where the bulk of work is done by certified nursing assistants. If you are one person and you are trying to take care of 20 residents and responding to urgent needs, helping people go to the bathroom, then you don’t have time to turn people,” Schaub said, referring to guidelines for repositioning residents every two hours to prevent pressure sores.

The union, she said, looks forward to working with the State Legislature and Gov. Andrew M. Cuomo in the coming months as the safe staffing proposal is discussed.

Over the last decade, the SEIU has donated approximately $36 million to political committees in New York, according to state Board of Elections records.

Cuomo, a Democrat who has received about $270,000 from the union since his first successful gubernatorial campaign in 2010, has expressed support for safe staffing ratios.

"Next session I will introduce legislation allowing the Department of Health to set safe staffing levels by regulation as legislative solutions have not been forthcoming," Cuomo said in a statement last June.

In 2004, California required nurse staffing ratios for hospitals and nursing homes. In July, it increased the amount of time certified nursing assistants are required to spend with nursing home residents. Under the revisions, CNAs must provide 144 minutes of the total 210 minutes that the nursing staff  is required provide to each resident daily.

There are nursing ratios in other states, but California is frequently mentioned by advocates as having the most comprehensive safe staffing rules.

However, the ratios have not made a big difference in care to California nursing home residents because operators, until recently, would increase staffing levels in the weeks prior to state health inspections to make it appear that they were complying, according to Patricia McGinnis, director of California Advocates for Nursing Home Reform.

And more than 50 percent of California's nursing homes are seeking waivers, claiming that they are unable to hire enough certified nursing assistants to comply because of a tight labor market, she said.

"Unfortunately California is no role model for anything with nursing home care," McGinnis said.

A shortage of CNAs has also been cited in New York State because those jobs pay low wages and there is the opportunity to work at other minimum wage jobs, where the demands are not as great.

The Centers for Medicare and Medicaid earlier this year started requiring nursing homes to report staffing levels based on payroll records. Last week, the centers announced it had begun sharing the payroll information with states when potential low staffing issues are spotted. States, in turn, will be required to investigate.

“In general, the new payroll-based staffing data shows most facilities have somewhat fewer staff on weekends, but some facilities have significantly lower weekend staffing,” the Centers for Medicare and Medicaid said in a statement.

If state health investigators determine “insufficient nurse staffing levels” exist at a facility, it will “be cited for noncompliance and required to implement a plan of correction,” according to the centers.

The Buffalo News in February filed a Freedom of Information Act request asking the New York State Health Department if it has taken any enforcement actions against nursing homes in Erie and Niagara counties for violating the state requirement for adequate staffing. To date, no response has been received.

Michelle Spencer, who worked in Buffalo area nursing homes for 25 years as a social worker, said she decided to leave nursing home work four years ago because she could no longer take working in a high-pressure system that she considers broken. She now works for a company as a geriatric care manager that sometimes takes her back into nursing homes.

As an outsider, she said, “I see that it is still a failing and broken system,” especially when it comes to staffing levels.

And that is why Spencer thinks the state requirement of sufficient staffing levels needs to change to minimum staffing ratios.

“Adequate staffing is in the eyes of the beholder,” she said. “It’s subjective.”