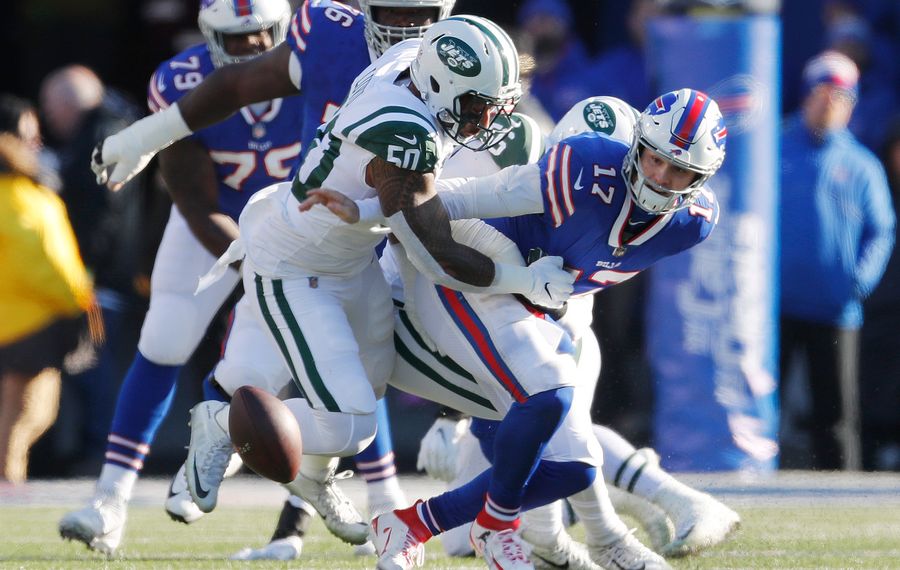 Theme: Buffalo Bills offense hums. For the fourth time this year, the Bills scored a touchdown on their first drive. For the third time in the last four games, they scored two touchdowns in the first quarter.

Young guns: Josh Allen is 22, Sam Darnold 21. It was the second-youngest starting quarterback meeting in NFL history. The only one younger was a 2015 season-opening meeting between Tennessee’s Marcus Mariota and Tampa Bay’s Jameis Winston, both of whom were 21 at the time.

Tank-back: The New York Jets used 313-pound guard Dakota Dozier as a fullback early and throughout the game.

Key absence: The Jets were without their best linebacker, Darron Lee, whose 4.47 40-yard dash is third fastest among all NFL linebackers the past 10 years. He’s suspended. Starting in his place was Neville Hewitt.

Zebra report: For the fifth time this season, one of the NFL’s rookie referees (there are four of them in 2018) worked a Bills game. This time it was the crew of Alex Kemp, who is in his fifth year in the league, working the game.

Jay Skurski's 10 observations: Injuries pile up on both sides in Bills' loss

Theme: Letting them back in the game. Bad special teams cost the Bills, as the Jets got a big kickoff return and a blocked field goal.

Rookie mistake: It didn’t cost the Bills points, but Josh Allen tried to do way too much on an interception with 4:47 left in the half. Chased to the sideline, Allen threw across his body down the seam instead of easily throwing the ball away. Trumaine Johnson grabbed a gift interception.

Zebra report: Jets defensive lineman Henry Anderson flattened Stephen Hauschka with a cheap, blind side hit after the blocked field goal at the end of the half. It was away from the play so the officials didn’t see it.

Second-guess: Down 14-3, Jets coach Todd Bowles opted for a field goal on fourth-and-goal from the 3. Maybe he didn’t want to run his best goal-line play that early in the game. We would have gone for it.

Dueling rookies: Darnold made the same rookie mistake in the third quarter that Allen made in the second. On a third-and-9 play from the Buffalo 33, Darnold rolled toward the right sideline and threw across his body into traffic for a needless interception.

Mark by No. 49: Bills linebacker Tremaine Edmunds, age 20 years, 7 months, became the youngest NFL player ever to intercept a pass when he picked off Darnold’s miscue.

Matchup watch: The middle of the Bills’ offensive line struggled to get push against the Jets’ defensive front. The Bills managed just 12 yards on seven first-down runs in the second half, a 1.7-yard average. That left QB Josh Allen fighting bad down-and-distance passing situations. The Jets’ best defensive lineman, Leonard Williams, caused problems. His pressure caused an incompletion to force a Bills punt.

Enough is enough: After being burned by return man Andre Roberts in the first half, the Bills squibbed both kickoffs in the third quarter. It paid off. Roberts muffed the first, the Bills recovered and turned the miscue into a field goal.

Theme: Darnold earns a fourth-quarter comeback. The Jets’ rookie drove his team 61 yards in nine plays for the winning score.

RB depth: Every NFL team, it seems, has capable runners on the bench. With starter Isaiah Crowell on the bench, second-year man Elijah McGuire gave the Jets a capable 60 yards on 17 carries. He scored the winning TD on a 4-yard run. McGuire was a sixth-round draft pick out of Louisiana-Lafayette last year.

No trigger: On the first play of the Bills’ drive from their own 16 with 12:01 left, Allen had Zay Jones open at the 40 for 25 yards but didn’t pull the trigger quick enough and had to scramble for 2 yards.

Key drop: Jones dropped a pass at the Jets' 34 with 9 minutes to go that would have been a 14-yard gain. Two plays later, the Bills missed a 54-yard field goal try.

Points over yards: The past two weeks Bills outgained the Dolphins and Jets, 783-423, but lost both games.