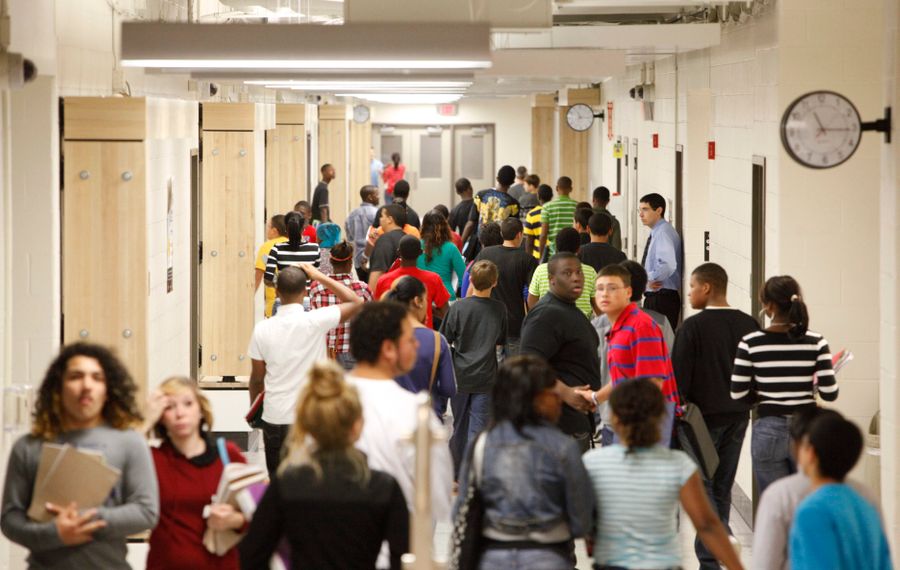 When it comes to school discipline, Buffalo suspends students at a higher rate than any of the large urban districts in New York State.

Not only that, but black students in Buffalo are more than twice as likely to be suspended than their white classmates. Most susceptible are black males in the city’s high schools.

But those inequities go far beyond Buffalo.

Across the rest of Erie County, for example, black students make up a small percentage of school enrollment, but account for more than one-fifth of the suspensions.

That’s according to a new report from a statewide coalition trying to shed a spotlight on the racial disparities in how districts across the state impose out-of-school suspensions.

The report, being released Monday by the New York Equity Coalition, underscores the research that shows black students nationwide are being suspended at far greater rates than white students and that there needs to be more alternatives to the traditional punitive model of school discipline.

The issue is coming up now, because the New York State Board of Regents is expected to adopt regulations intent on holding districts more accountable for the number of out-of-school suspensions they’re doling out.

“Also,” Rosenblum said, “it speaks directly to the school climate and whether that climate enables all students to be successful.”

In fact, Cash said student suspensions were one of the four big issues — attendance, over-referral to special education and failing schools, being the others — that framed his plans for reform when he took over the troubled urban district in 2015.

“We are tackling it,” Cash said, “and addressing it on a number of fronts.”

The Education Trust, a non-profit that advocates for students of color and low income, is a member of the equity coalition, which also includes parent, business, education and civil rights groups. It analyzed state data that showed the number of students who were suspended at least once during the 2016-17 school year.

Some of the findings:

• Buffalo had the highest overall suspension rate when compared to its peers around the state — Rochester, Syracuse and Yonkers. Nearly 14 percent of students in Buffalo received at least one suspension.

• The racial inequity is even more stark outside of Buffalo. Across the rest of Erie County, black students made up only 5 percent of the enrollment, but accounted for 21 percent of the suspensions.

“It’s not just about Buffalo,” Rosenblum said. “Outside Buffalo, in Erie County, we see stunning disparities in how school districts impose suspensions.”

Samuel L. Radford III, president of the District Parent Coordinating Council, a Buffalo parent group and member of the equity coalition, said the findings from the report reflect the same frustrating battle he has been fighting for years.

In fact, the situation is likely worse, Radford said, because the data doesn’t capture multiple suspensions for individual students.

“At the end of the day, as a parent leader, I feel like suspensions do not work,” Radford said. “They’re really an outdated method to try to change behavior and no one has ever been able to explain to me, ‘How does suspension change behavior?’ All it does is put the kid out of the classroom.”

But Radford said he does like the approach Cash has taken on this issue and believes Buffalo is headed in the right direction.

This issue has long been a topic of debate in Buffalo.

The 2010 death of Jawaan Daniels, killed in a drive-by shooting while suspended for roaming his high school hallways, sparked community outcry and forced the district to adopt a new code of conduct that banned out-of-school suspensions for minor infractions. The school district, in fact, received national recognition for its efforts, and by the spring of 2013, the number of short-term suspensions had dropped by nearly 40 percent.

But far too many kids, particularly minorities, are still being suspended and missing out on classroom instruction due to minor behavior that could be handled much differently, Cash said.

That’s why the district two years ago started several ongoing training programs for teachers across the district, including training on restorative practices. That's a broad term used to describe nonpunitive ways of dealing with behavioral problems, like mediation, community service or peer counseling, as opposed to suspensions, which can reflect an implicit bias toward students.

“So often it’s not a deliberate thing,” Cash said, “and these trainings help them to see that. It’s been very, very powerful.”

The school district, however, has gotten some push-back from the Buffalo Teachers Federation, which complained last year that bad classroom behavior was receiving little to no consequences.

Teachers say the training hasn’t been comprehensive enough and there’s not enough time in the day to institute it faithfully, according to Philip Rumore, BTF president. The union, instead, called for a substantial increase in the number of school counselors, social workers and psychologists.

“If there are a disproportionate number of students being suspended — and there probably are — then we have to look deeper at why they are being suspended and work to solve the problems that are causing their suspension,” Rumore said. “Just saying it’s because of race doesn’t really do the issue justice.”

Short- and long-term suspensions in Buffalo totaled more than 9,900 during the 2016-17 school year, district data shows.

Cash noted the data from the study was two years old, and so far this year suspensions in Buffalo are trending downward.

“Don’t get me wrong,” Cash said, “we have to have tough love and there are certain things I’m going to have to suspend students for."

“We’ll see,” Cash said. “It takes time for this to catch hold, but I know what my expectations are. I’m very encouraged by the array of strategies that we are taking to try to reduce suspensions and disproportionality in a number of areas.”

The report, meanwhile, isn’t meant to cast blame on school districts, Rosenblum said, but instead to create discussion that addresses the problem.

“Are educators being given the support they need to create restorative practices instead of just using punitive disciplines?” Rosenblum said. “Are there strategies in place to address implicit bias that might explain some of the disparities we see?”

“We think it raises important questions that we should be posing to schools and school districts,” he said.