In a roundabout way, the Town of Tonawanda wants to make it easier for drivers, bus passengers and bicyclists to travel one of the main east-west thoroughfares in the Northtowns.

Town officials are discussing a host of changes to Sheridan Drive as it runs from Niagara Falls Boulevard to the Niagara River.

And, yes, they envision installing a trio of roundabouts at the three-headed intersection of Sheridan Drive, Niagara Falls Boulevard and Eggert Road on the Tonawanda-Amherst border.

"It's a culture shock, because we're so used to using this century-old traffic signal, which is archaic," said James Jones, Tonawanda's town engineer.

To be sure, the proposals range from the practical to thinking out loud, and none will come to fruition without an extensive planning and approval process. Some require buy-in from the state Department of Transportation and the Niagara Frontier Transportation Authority and financing is a prime consideration.

But Jones and other advocates say it's time for communities to consider how to improve roads built only with the interests of drivers in mind.

The public's transportation needs are evolving – ride hailing is here, for example, and self-driving cars are next – and roads need to adapt along with them.

The state plans to put the Clarence section of Sheridan Drive, east of Transit Road, on a "road diet" by thinning it by two lanes and leaders in Amherst are open to changes on their stretch of the road, as well.

"Sometimes people are afraid of change, and things new, but they really need to embrace technology. Because in the world of technology and smart cities, we don't want to be left behind as a region, and these things are changing quickly," said David Stinner, president of US itek, an information technology company near the Sheridan-Niagara Falls Boulevard intersection.

Sheridan Drive was built in the 1920s at a time when that section of Tonawanda was largely farmland. Today it's a major route linking Tonawanda, Amherst and Clarence, from the GM Tonawanda engine plant and Sumitomo Rubber USA to the west to the Boulevard and Eastern Hills malls to the east.

Jones and others say Sheridan isn't as much of a public safety concern as Niagara Falls Boulevard, where six pedestrians have been fatally injured while attempting to cross the street in the past five years.

But they say planners need to think about changes on Sheridan to make the road safer, while adapting to the future of transportation. That would include considerations about connecting with NFTA's proposed extension of the Metro Rail from Main Street in Buffalo to the University at Buffalo North Campus.

"We're either way behind or we're going to be way ahead, in terms of utilizing mass transit," said Cathy Piciulo, executive director of the Ken-Ton Chamber of Commerce, who supports the plan to extend Metro Rail along part of Niagara Falls Boulevard. "But we do have to realize that the millennials, the future generations, some of them don't even have driver's licenses."

The proposals include a road diet for the eight-lane section of Sheridan, primarily between Military Road and Belmont Avenue. This would shrink the road to six driving lanes and better control the speed of traffic on the remaining lanes.

"I think it's definitely wider than it needs to be," Piciulo said.

The DOT will shrink the stretch of Sheridan in Clarence, heading east from Transit to where Sheridan bends to meet Main Street, as part of planned road work there.

If the Tonawanda road diet is imposed, crews could convert the outer lanes in each direction to dedicated bike lanes separated from vehicle traffic by a curb or flexible bollards.

Express buses could use those lanes too. Jones said those buses could make it easier for workers to get to the major employers at Sheridan's western edge along the riverfront, along with bringing customers to small businesses and other venues up and down the road.

"That would help reduce traffic on Sheridan Drive," Jones said, arguing the express buses could run from Tonawanda to Clarence and link up with the proposed extension of the Metro Rail at Niagara Falls Boulevard.

Jones and others would like to see responsive traffic signals that adapt to the time of day and the volume of traffic on the road. There's no reason, they said, for drivers to spend as much time as they do idling at signals. A focus would be the section between Sheridan Park Golf Course and Belmont.

Jones' support of roundabouts is perhaps his most eye-catching suggestion. The Sheridan-Niagara Falls Boulevard-Eggert triangle is a traffic bottleneck at busy times of the day.

Jones would like to study installing roundabouts at the three intersections there, but only as part of an extension of the Metro Rail. The concept came out of brainstorming at a recent Congress for the New Urbanism conference held in Amherst, Jones said.

"This is the time to throw ideas on the wall and see what sticks, because we just can't keep doing what we're doing," Jones said.

Drivers tend to view proposed roundabouts with disdain, and many are confused about how to travel through them. The proposal of the traffic-calming devices in Hamburg and Cheektowaga were met with loud, public opposition. But Jones said, once they are installed, they gain more support.

"All change is difficult," said Piciulo, who noted their use in Hamburg and on Wehrle Drive.

Advocates say these changes could make Sheridan easier to navigate for everyone – users of public transit, pedestrians and cyclists – and have benefits for businesses located along the road.

For example, a Rails to Trails bike path crosses Sheridan, east of Belmont. The chamber's Piciulo would like cyclists, pedestrians and others to feel comfortable leaving the trail to go up and down Sheridan.

A HAWK beacon guides people using the trail across Sheridan, and the town wants to replace a closed pedestrian bridge at Hoover Elementary and Middle schools with another HAWK signal, but is waiting for DOT permission to proceed. 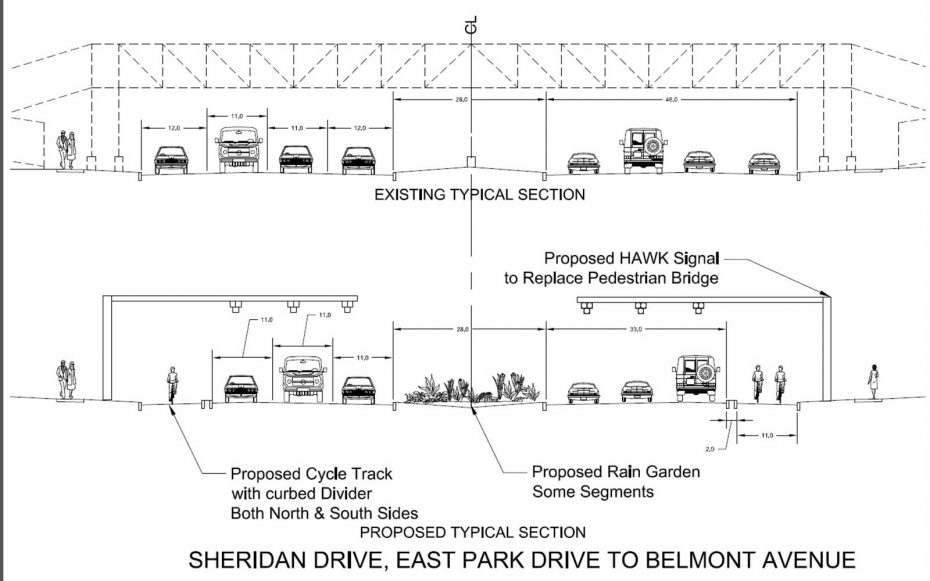 A rendering of proposed changes to Sheridan Drive includes removing the pedestrian bridge, adding a HAWK signal and reducing the number of lanes to add bicycle lanes. (Courtesy of the Town of Tonawanda)

Studies show that physical changes to roadways, such as installing pedestrian refuge islands, roundabouts and curb bumpouts, do tend to improve safety, said Bumjoon Kang, a UB assistant professor of urban planning who has studied safety countermeasures used on roadways and has worked with Jones in the past.

He did question the value of dedicated bike and express bus lanes in a midsize city that doesn't have the heavy traffic of a Seattle, San Francisco or New York.

"Think about, on Sheridan, we don't really have any traffic. A traffic jam in Buffalo is really laughable. You're delayed, maybe five minutes," said Kang, although drivers here feel the pain of even minor delays.

Some of the proposals are more realistic than others. For example, the NFTA last week said Sheridan doesn't have enough businesses or residential population to be considered for express bus service.

As part of its study of the proposed Metro Rail extension, the agency is looking at how best to move trains along Niagara Falls Boulevard and the rest of the above-ground route. It's too soon to say whether roundabouts will be included, said Rachel Maloney, planning project manager for the light rail extension.

The DOT, for its part, said it is studying installing adaptive signals on Sheridan, but only on the stretch between Niagara Falls Boulevard and Eggert. A road diet would be considered only as part of future construction on the road, a department spokeswoman said.

Amherst Supervisor Brian Kulpa said Amherst has some of the same interests in making Sheridan easier to navigate, although the road takes different forms as it runs through his town and any changes would need to match each distinct section.

"I'm on board to experiment a little, and try things out. I just want to see it in a model," Kulpa said. "We want to get the best corridor we can. What does that look like? It's going to take some doing."