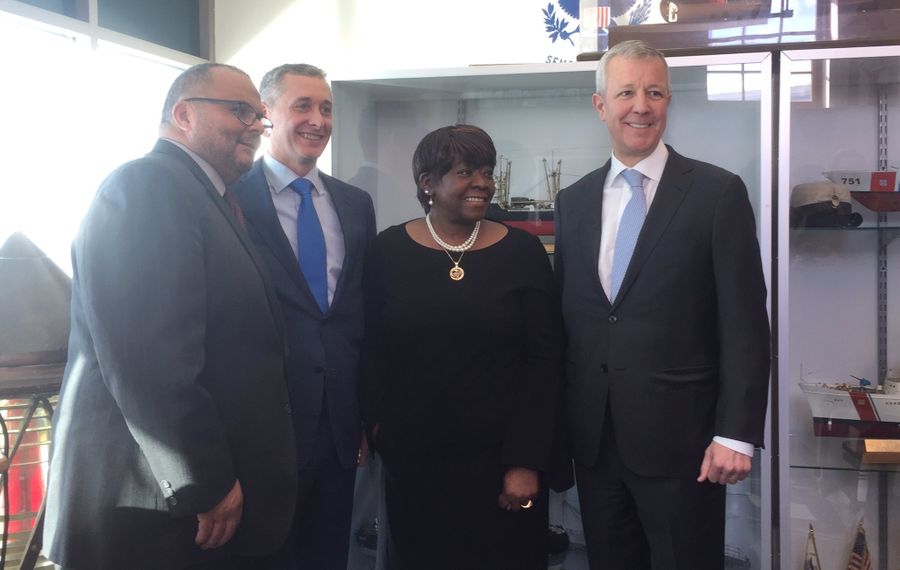 On the anniversary of one of the most profound days in American military history, two of Buffalo's major companies gave a serious boost to a major military monument that is on track to open downtown next year.

M&T Bank and Delaware North announced Friday, Pearl Harbor Remembrance Day, a $200,000 joint grant to the African American Veterans Monument, a first-of-its-kind tribute that will be located at the Buffalo and Erie County Naval and Military Park adjacent to Canalside.

The grant pushes the fundraising total to $1.27 million, closing in on the organizing committee's goal of $1.5 million.

Construction on the monument broke ground in November, and the committee's hope is that it will be completed during the summer of 2019 so the ribbon can be cut next Veterans Day.

"It's really helpful and makes you proud when you get the two largest corporate leaders in the community to come to the front and to acknowledge and put their money where their mouth is," said Warren Galloway, a U.S. Air Force veteran who is the chair of the monument committee. "We're hoping that we can get other corporate people in this area to come on board and help out."

Rene Jones, Chairman and CEO of M&T Bank, told the story of how his father enlisted in the Army during World War II.

"During the 1940s, hundreds of thousands of Americans rushed to demonstrate their patriotism and enlist in the armed forces," Jones said. "One of those who was enlisted was Sgt. First Class Matthew Jones, my dad. My dad was an African-American who served in Patton's army and he met my mom, who was from Belgium, on his way to fighting in the Ardennes. And they together raised six kids from Europe to Boston, Mass.

"Of the 16 million men and women who served in World War II, more than 1 million, like my dad, were African-American. ... America's people of color have fought and died in every single campaign since our nation's birth. Most importantly, they were never recognized for their service and many of their stories remain unknown or untold. The African American Veterans Monument is the first of its kind in the nation, and it's going to play an important role in recognizing these courageous individuals."

African-American veterans monument in Buffalo will be first in U.S.

Jones said the partnership with Delaware North was an example of the kind of collaboration he has sought since being named to his post last year.

"I spent a lot of time talking to individuals and looking for things that really bring our community together and unite us, particularly in a time which can be easily described as relatively divisive," he said. "These opportunities are really important to pull us together."

Lou Jacobs, co-CEO of Delaware North, said, "This veterans monument will stand as a tribute to our African American friends and neighbors who sacrificed, and continue to sacrifice for our freedom and our safety. There is perhaps no better location for it than our city's waterfront, where the annual visitation number is no longer measured in thousands, but instead in millions." 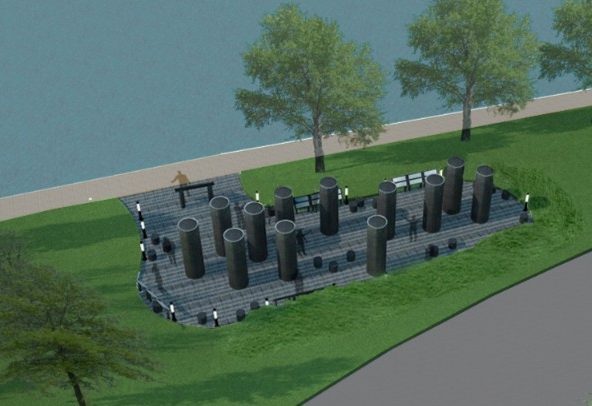 This rendering shows the planned African American Veterans War Memorial planned for the Naval and Military Park near Canalside.

The monument will consist of 12 10-foot tall black concrete pillars representing each of the country's major military conflicts.

"At the top of the columns will be solar panels, so that at night they will light up," said state Assembly member Crystal Peoples-Stokes. "That's the history of people who went to war, families would light a candle in the window, so they could find their way home. We would like this monument that have everybody find their way to understanding the value of our contributions to society and the military."

Galloway said that while the committee is closing in on its goal, it is continuing to raise funds in order to establish an endowment plan for maintenance of the monument space as well as new additions to the plans, like digital apps visitors can use in conjunction with visiting the site.

Galloway told the story of Dorie Miller, an African-American who enlisted in the Navy as a mess attendant in 1939. According to Navy records, Miller was serving on the U.S.S. West Virginia when it came under fire during the attack of Pearl Harbor; Miller carried wounded sailors to safety and manned a 50-caliber browning anti-aircraft machine gun until he ran out of ammunition. It is believed that Miller shot down at least one Japanese plane, and Miller was subsequently honored with the Navy Cross.

"This is why this monument is so important," said Galloway, who has been part of a committee that has met every two weeks for two years in planning the monument. "There are many African-Americans who have served and became heroes, but they never got the acknowledgement because of the color of the skin. That shows you why we're working so hard and what this monument means, not only to Western New York and Buffalo, but for the nation."