For hours Tuesday, John Flickner sat in his wheelchair in a Niagara Falls apartment building lobby – clutching his medical marijuana and worried about where he would go for the night.

The prescribed drug eases his chronic pain from a skydiving accident 50 years ago.

It also got the 78-year-old man evicted from Niagara Towers, sparking a debate about a tenant's rights to medical marijuana in a federally subsidized facility.

Flickner uses the drug with a doctor's prescription, and he has carried a New York medical marijuana card since a run-in with managers last summer at the senior low-income housing facility subsidized by the federal Department of Housing and Urban Development.

"It's a vaporizer," Flickner said of his prescription. "It's got a battery and a cartridge fits on it. The oil's in it. You don't smoke it. There's no odor to it."

The vapor relaxes the muscle spasms that make it hard for him to breathe, he said.

"Just a minute or two after using it, it starts to take effect," Flickner said.

But while state law allows Flickner to use prescribed medical marijuana, federal law allowed his landlord to evict him for drug possession.

Federal law did not require Niagara Towers to evict Flickner. Indeed, the law gives HUD building managers the flexibility to allow residents to take the prescribed drug. But the company that owns the 201-unit high-rise on Cedar Avenue was not willing to let Flickner do so.

"We don't allow marijuana of any kind – liquid, smoking, whatever," said Amy Styles, a spokeswoman for LHP Capital, the Tennessee company that operates the Niagara Falls facility and 56 others around the nation, including Tonawanda Towers and Urban Park Towers in Lockport.

Doctor's prescription or not, LHP enforced its policy on Flickner, persuading a Niagara Falls judge to sign an eviction order because of Flickner's marijuana possession.

On Tuesday, a city marshal came to Flickner's apartment and read aloud the eviction notice. Then Flickner left the apartment and took the elevator down to the lobby holding a plastic bag with his medical marijuana and some other prescriptions.

He waited as others tried to find a place for him to go and a ride to get there. They found a place, but no one could find him a ride in a vehicle large enough to accommodate his wheelchair. So in 28-degree weather, Flickner steered his motorized wheelchair from Niagara Towers,  across a Tops Market parking lot, then across Portage Road, and rolled down the sidewalk to his new temporary home: the Niagara Gospel Rescue Mission.

John Flickner uses his motorized wheelchair to get to the Niagara Gospel Rescue Mission on Portage Road after he was evicted from his Niagara Towers apartment. (Robert Kirkham/Buffalo News)

Flickner's troubles began June 11, when staffers at Niagara Towers making a monthly inspection found a small amount of marijuana on the living room table in his fourth-floor apartment.

“Any type of marijuana that is found, our managers are required to call the police," Styles said.

He had smoked the marijuana buds in his room.

One of the detectives told Flickner he needed a script from a New York State doctor to possess the marijuana, according to a police report. The police chose not to charge him.

The assistant office manager said Flickner would be evicted due to "their rules and regulations of the facility," according to the police report.

But LHP began the eviction process. Flickner had lived in his apartment for two years. He had signed a lease that made it clear no drugs were allowed.

Smoking pot in his room before the inspection became a key issue in court, said Jason J. Cafarella, a Niagara Falls attorney hired to represent LHP.

Niagara Towers hoped to reach an agreement for Flickner to leave without need for a formal eviction. That didn't happen, so a Nov. 1 trial was held, Cafarella said.

The trial lasted about an hour before City Judge Danielle M. Restaino. Flickner was represented by Kevin Quinn of the Center for Elder Law and Justice in Buffalo, who did not respond to a request for comment.

On Nov. 29, Restaino signed the eviction order, and a 72-hour notice was taped to the door of Flickner's apartment.

At 2 p.m. Tuesday, Brosius and Rocco Zendano Jr. of the Niagara Falls City Marshal's Office showed up to evict Flickner, while a Niagara Towers custodian changed the locks on the apartment door. 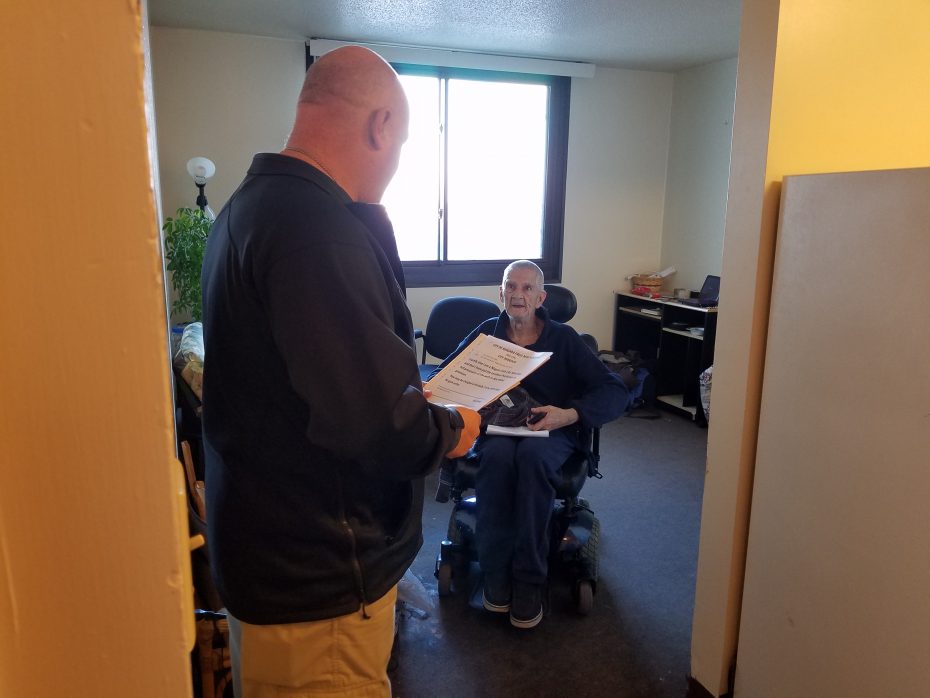 Brosius told Flickner arrangements would be made for him to return and get his belongings.

Flickner, already wearing a coat, put on his hat, rounded up his marijuana inhaler and some cigarette butts, and wheeled himself to the elevator.

Getting around in a wheelchair is a far cry from what Flickner did as a young man when skydiving was his hobby. He made more than 50 jumps, but in 1968, near Boise, Idaho, he crashed to the ground.

"The parachute hit the ground about the same time I did, from a couple hundred feet in the air," he recalled. "It was an error on my part."

As a result of his injuries, he has five fused vertebrae and has undergone four surgeries on his spine and hips.

He worked for many years as a toolmaker and lived around the country before eventually moving to Niagara Falls. He was married twice and has four children, all out of state.

"It's gotten steadily more painful," he said of his condition.

Doctors at Complete Senior Care in Amherst sent Flickner to get medical marijuana from Dr. Barry Crawford, who is licensed to prescribe it. 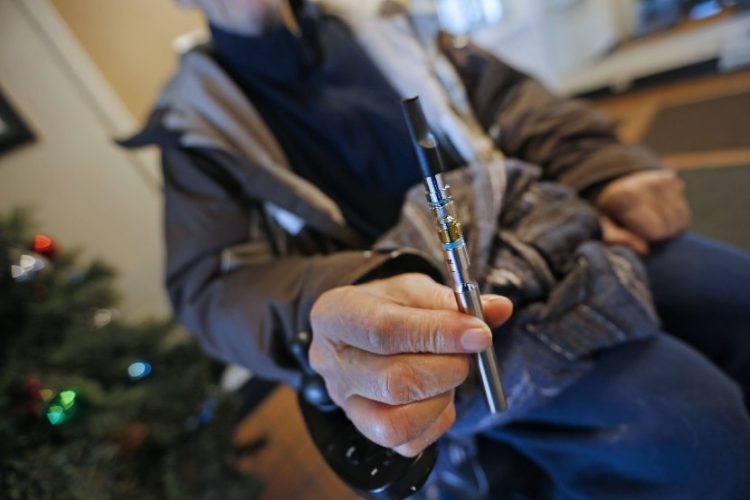 John Flickner shows his medical marijuana device that provides him with his doses. (Robert Kirkham/Buffalo News)

In 1998, then-President Bill Clinton signed a law requiring landlords of federally assisted housing facilities to deny admission to anyone whom they believe to be using illegal drug, including marijuana.

But with the trend toward legalization of marijuana, landlords began to ask HUD for guidance on the issue.

As of last month, 23 states, including New York, had legalized medical marijuana, and 10 other states had legalized recreational use of the drug.

During the Obama administration, HUD issued memos to landlords that told them the 1998 law allows them to use their own judgment in whether to allow tenants to use medical marijuana in government-subsidized housing. The Trump administration has not altered that policy.

A  2014 memo reminded landlords that marijuana is still listed as an illegal substance under the federal Controlled Substances Act, and prospective tenants who use controlled substances are to be barred from public housing. But the 1998 law "affords owners the discretion to evict or not evict current tenants for their use of marijuana."

A 2011 memo said, "State laws that legalize medical marijuana directly conflict with the admission requirements set forth in (the 1998 law) and are thus subject to federal pre-emption."

“Our policy is that we have a drug-free community," said Styles of LHP. "Our policies and procedures do say ‘no drugs whatsoever.' "

"They have a policy, and they have every right to that policy," said Cafarella, LHP's attorney. "It's just unfortunate, the end result."

After his eviction, Brosius advised him he could go to the Niagara Falls Family YMCA or to Community Missions. Flickner wasn't enthusiastic about either option.

About 3 p.m., Brosius called for an ambulance and asked the crew to take him to Niagara Falls Memorial Medical Center. The ambulance crew refused to take him because he didn't have a medical reason to go to the hospital.

At about 5 p.m., Robyn L. Krueger, executive director of Community Missions of the Niagara Frontier, tried to find a van that could bring Flickner and his wheelchair to the Buffalo Avenue shelter.

No company, however, could be found with an available vehicle. So Krueger contacted the Niagara Gospel Rescue Mission, located in the former YMCA a short distance from Niagara Towers.

By then, Flickner had changed his mind and was willing to go to the shelter. So he made the trip using his wheelchair. 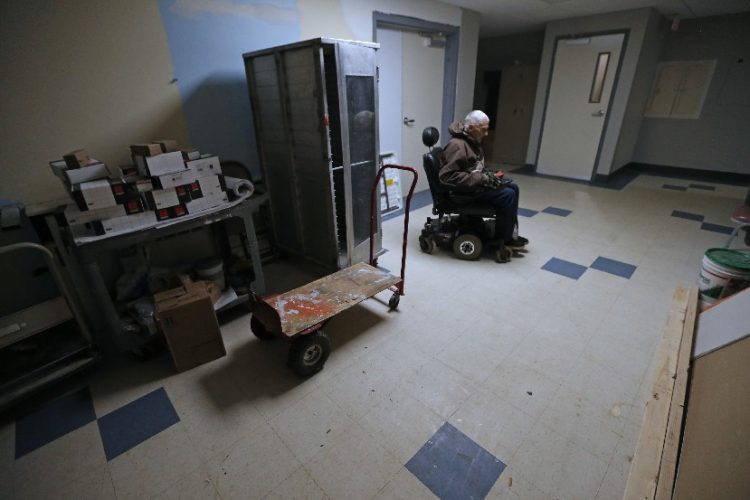 Waiting for word and shivering, John Flickner parks his wheelchair in a back storage room as he waits for a bed at the Niagara Gospel Rescue Mission. (Robert Kirkham/Buffalo News)

The day after his eviction, Andree Levesque, a friend of Flickner's, picked him up at the shelter.

"We knew he was going to be evicted but there was no time to find anything," said Levesque, 71.

He spent most of the day at the county Social Services Department and then moved into a motel room with Levesque, who was allowed to claim some of his belongings at Niagara Towers.

"They're nice people doing nice things," he said. "If I have to stay somewhere, I'd like to stay there."