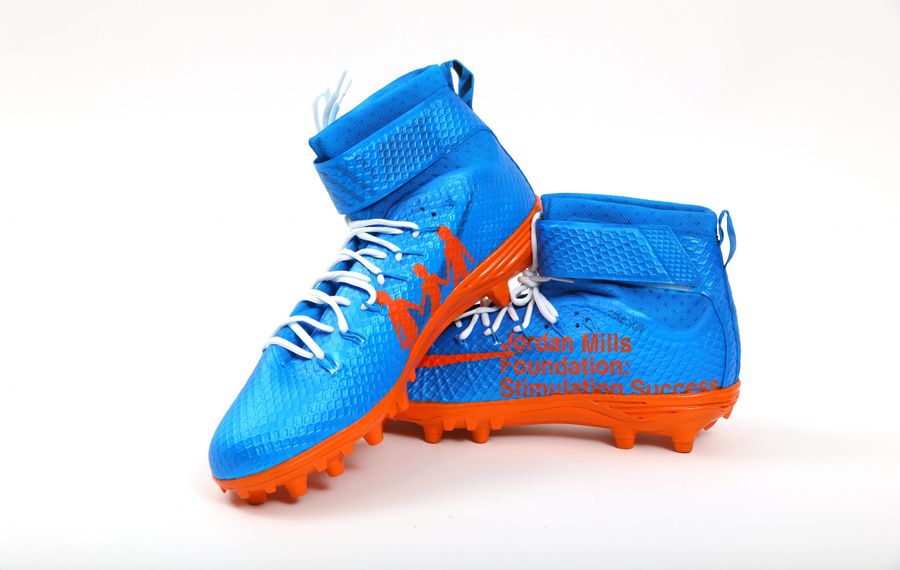 Philanthropy has been a part of Jordan Mills’ life for as long as he can remember.

The Buffalo Bills’ right tackle is the sixth youngest of seven kids. They grew up in a household in Napoleonville, La., that stressed how important it was to give back to others. Mills’ father, O’Neal, has worked in the Napoleonville Volunteer Fire Department for more than 25 years and serves as the vice president of the Lafourche Parish NAACP.

During Mills’ recent bye week, he returned to his hometown to serve a free Thanksgiving meal to residents in the cafeteria of his alma mater, Assumption High School.

It was one of the first official events put on by the Jordan Mills Foundation, which was established by the veteran offensive lineman and his wife, Talasha.

“We wanted to start a foundation to give back to our communities back home in Louisiana,” Mills said of himself and his wife, who grew up in the neighboring parish. “The kids there don't get that many different opportunities to increase their knowledge by experiencing new things.”

On Sunday, as part of the NFL’s “My Cause, My Cleats” campaign, Mills’ blue-and-gold footwear will sport the words "Jordan Mills Foundation: Stimulating Success." A beautifully simple initiative, “My Cause, My Cleats” allows players to wear customized cleats for one week during the season. Those cleats give players a chance to honor people or charitable organizations that are important to them. They will be auctioned off at nfl.com/auctions, with 100 percent of the proceeds going to the player’s chosen charitable cause.

“People think it's about the cleats, but it gives us a chance to show what's near and dear to our hearts,” Mills said. “Wearing it on our cleats, it's something special for all of us to do.”

Talasha Mills was a chemistry major in college, so the foundation will have an emphasis on science, technology, engineering and math. Scholarships will be awarded and a football camp will be held next summer, among other scheduled events.

“There's a lot that goes into it, but that's part of having this platform,” Mills said. “I wish I had something like this growing up.”

Mills is the fourth member of the Bills to establish his own foundation, joining LeSean McCoy, Lorenzo Alexander and Micah Hyde. For his numerous off-the-field endeavors, Alexander was named the Bills’ nominee for the Walter Payton Man of the Year Award on Thursday.

Each of their cleats this week against the New York Jets will represent their organizations. A total of 24 members of the Bills will wear customized cleats. In addition, the organization has provided sneakers to all full-time staff that work gamedays to represent their chosen cause, as well.

Here is a look at just a few of the causes Bills players will support Sunday:

Hyde’s philanthropic efforts predate his time in the NFL. As part of a class project at the University of Iowa, Hyde was challenged to create a business plan that involved giving back to the community. His group saw a need to provide access to sporting equipment for underprivileged youth. Students then gathered new and used sporting equipment from local organizations, sporting goods stores and those willing to donate. All that was collected was given to the Boys and Girls Club of Cedar Rapids.

“After the class was over, I wanted to do more,” Hyde said. “I saw how impactful it was.”

Thus, the Imagine for Youth Foundation was born. At first, the organization focused mostly on athletics, but it has since branched out to include academics. Every fall, Hyde runs a drive to pass out school supplies. In the next couple weeks, he’ll provide 150 pairs of new Nike sneakers to those in need. The organization has grown to help those in need here in Buffalo, as well as in Iowa, Hyde’s home state of Ohio and other locations around the country.

Hyde’s gold cleats are adorned with the organization’s logo.

“It’s pretty awesome,” Hyde said. “Every single year, more and more guys are catching on and bringing awareness to their favorite cause or foundation.”

Poyer was invited to carve pumpkins last October with the children at Camp Good Days, which is dedicated to improving the quality of life for children and families whose lives have been impacted by cancer or other life-threatening challenges.

“I was really touched by a lot of their stories and what they’re going through,” he said. “I wanted to do my best give back as much as I can.”

That has included donating tickets throughout the season and hosting an autograph signing with all proceeds going to the organization. Later this month, Poyer will take about 20 kids on a Christmas shopping spree.

“Everybody's got a story why they chose the organizations they chose,” Poyer said. “To be able to represent something bigger than you, it's been really good for me and my family. They have a really good leader (Lisa Booz, the Western New York regional director). She’s really excited about the future and me being a part of what they do.”

Murphy developed a passion for hunting last year, which he spent on injured reserve in Washington. It was there that he learned about an organization called Hunters for the Hungry. The idea is hunters can donate money or meat, which is then distributed to families in need.

"It's important to me because it's a unique way to use local resources to help fight hunger," Murphy said. "In Buffalo and the Western New York community, there's a ton of hunters, a ton of outdoorsmen, a lot of guys have extra tags, or extra meat or meat left over from last year. You can get it to your local meat processor. There's a ton of them out here, and then they help distribute it to families. They're already set up internally to do all that, which makes it so easy for someone who wants to help out. … I think it's a cool cause all around."

Murphy didn't know about Western New York's outdoor scene before signing here, but has quickly been brought up to speed by those he's come across, including teammates Ryan Groy and Russell Bodine, both of whom are avid hunters.

"It's a fun way for guys to express themselves and show their passions and interests off the field," Murphy said of wearing his customized cleats, which are, as you might expect, camouflage. "Maybe it opens up doors for somebody who needs help."