The most notorious dish offered at Stack Burger in Lackawanna is a punch in the mouth delivered in burger form.

The Demon Burger is blackened with an infernal spice mixture, powered by cayenne, black pepper and chile powders, welded into the beef’s surface as it sizzles on the griddle. That it looks like gunpowder is merely a coincidence.

Jalapeno and banana peppers add bursts of vinegary heat. Swiss American cheese and garlic mayonnaise tamps down the inferno, which flickers back to life with each bite. I started sweating two bites in, but the star of Stack Burger’s specialty burger lineup – winner of Best Overall Dish at the 2018 Taste of Buffalo – kept me riveted.

Like the old-school World Wrestling Federation bouts that sometimes entertain diners from the restaurant’s big wall-mounted flatscreen, it’s carefully calibrated violence. It’s as subtle – and as much fun – as watching someone get hit with a folding chair. 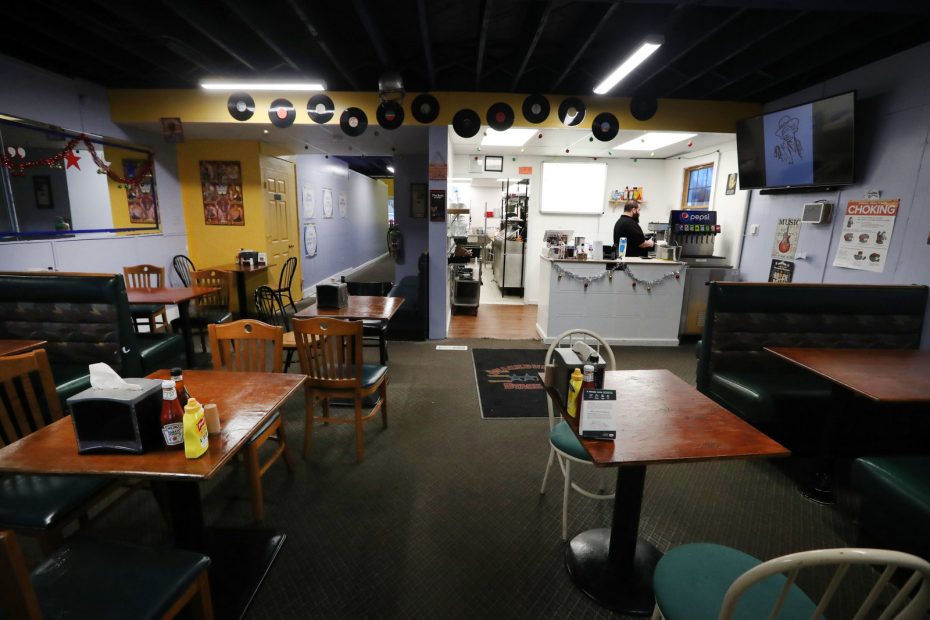 Joe Maurino and Anthony Giangrosso opened their first location in 2015, in West Seneca. One, two and three smashed-and-griddled patties with raggedy edges that crisped up were the main event. The specials board showcased creative burgers. It was a take-out spot, but people would sit in their car to eat their purchases hot off the griddle.

When Stack Burger won wider attention, it was for dessert – a deep-fried peanut butter and jelly sandwich that took Chair’s Choice and Best Overall at the 2016 Taste. In August, the Lackawanna location opened, giving fans a chance to eat off a table instead of a dashboard.

It’s a scruffy room decorated with 1980s album covers ("Blackout," "Master of Puppets," "Purple Rain") and a mirror emblazoned with the restaurant’s motto: Stack It Up. Service was prompt and the noise level wasn’t onerous, as long as you’re good with hair metal or wrestling. 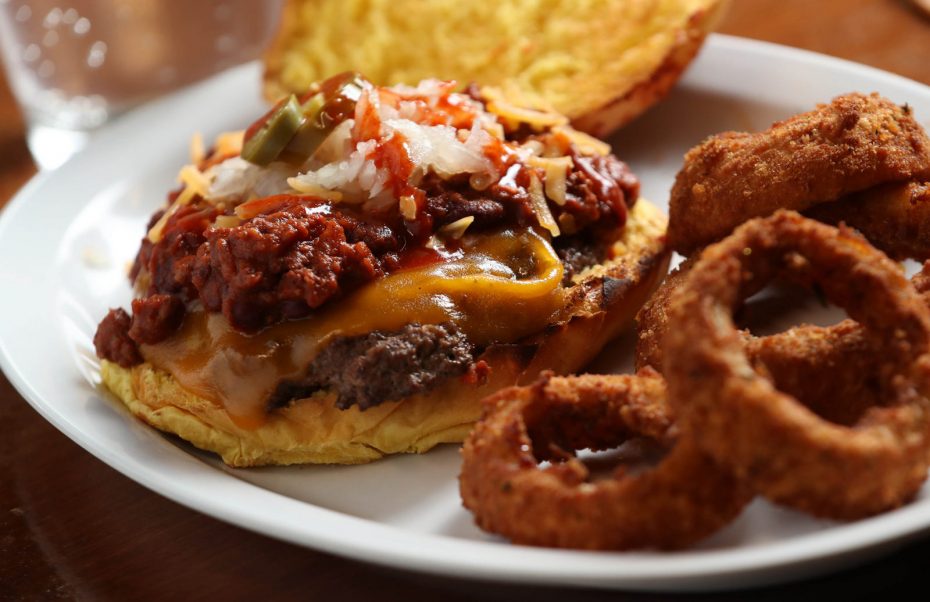 The Demon leads a roster of specialty burgers ($8.49-$8.99) that includes some real characters.

Meet Vinny. Like all Stack Burgers, it starts with 4 ounces of ground beef, smashed down into the griddle so the edges get a chance to crisp, and seasoned as it sizzles. So much mozzarella is piled over the Vinny that it flows on to the griddle, forming a golden corona of fried cheese that sticks out from the bun. Spicy attitude comes from a bracing coarse cherry pepper relish and crispy pepperoni.

Another tour de griddle is the French Onion burger. The beef is topped with the kind of dank, sticky alliums that result from a pot of French onion soup simmering all the way down to jam. The bun is toasted crouton style, then a provolone topcoat toasted almost to charring under a salamander. 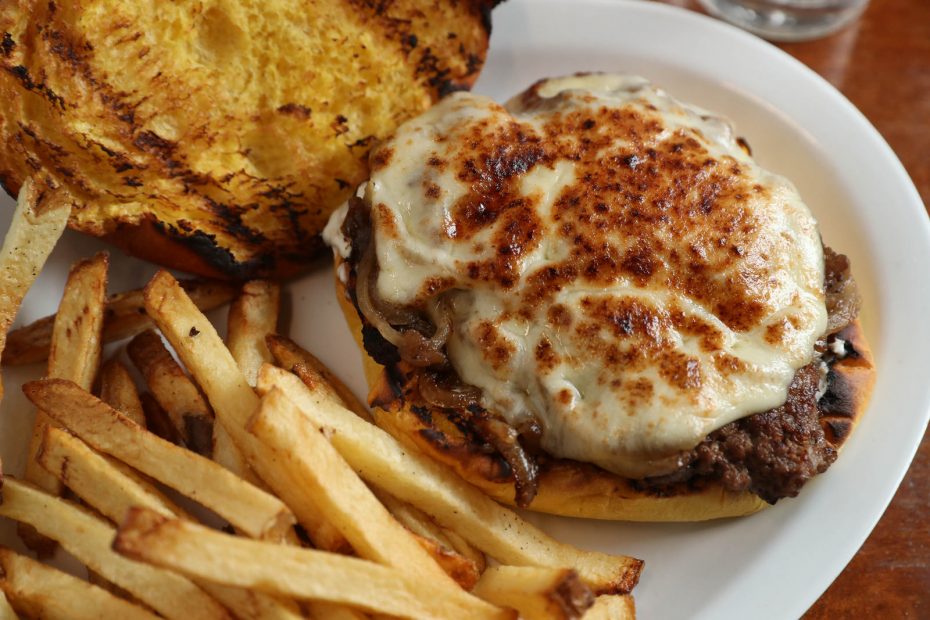 There’s even a burger with two toasted cheese sandwiches as buns. The X-Treme Grilled Cheese puts a raspberry cheese spread to work as well. Can you have too much cheese? You’ll know after this.

Despite the thrill rides, consider the basic single cheeseburgers ($5.60). Pay a couple of more dollars, double the meat to a half-pound ($7.70), and swap out the standard Thousand-Island-like Stack sauce for the ancho mayo. It’s a powerful chile liquor showcasing the pungent raisins-on-steroids resonance of ancho chiles, astringent verging on bitter, backed up with garlic and a touch of sweetness. That’s a fine touch on a fine sub-$8 burger.

If only it came in pink. Stack Burger doesn’t deliver rosy-in-the-middle burgers, defaulting to medium-well. There was enough moisture left in each bite of beef, though. 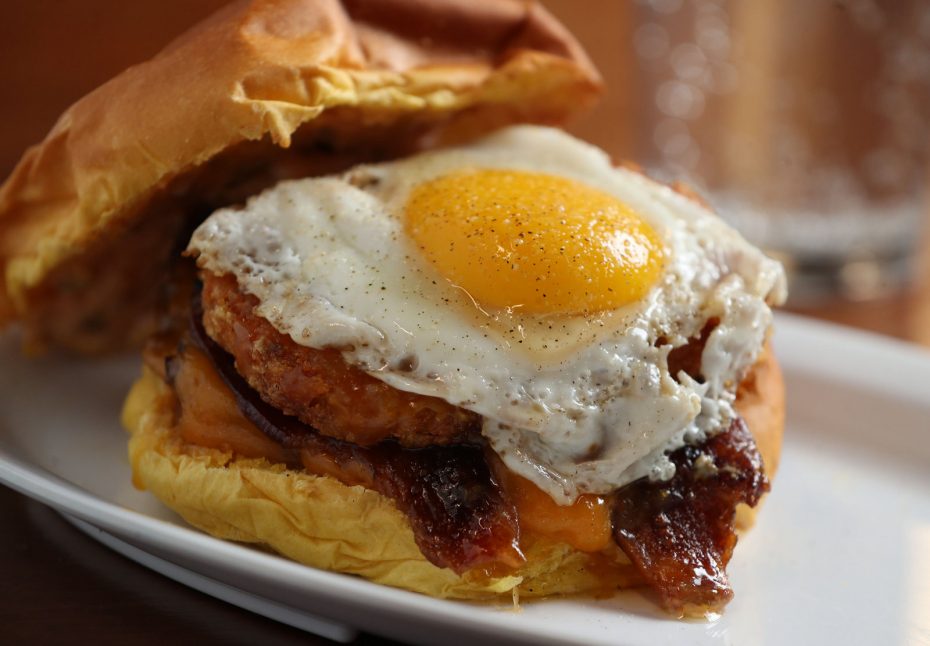 Chicken sandwiches were another matter. Thin cutlets of fried chicken, as in the Chicken Parm ($8.99), were tough under the marinara and mozzarella. Marinated grilled chicken ($7.79) was an admirably flavorful piece of poultry, pointed up with garlic-Parmesan mayonnaise that overcame leathery edges.

A Caesar salad ($6.99) came dotted with bag croutons, which usually means packet dressing. Then fresh garlic started crunching in my teeth, and the distinct pong of anchovy came through – this was fresh from-scratch dressing (eggless, Giangrosso said). The plate would have been even better with the promised pepperoncini.

Battered pickles ($4.49) had a welcome surprise with caraway seeds in the beer batter, the flavor two-thirds of the way to beef on weck. Crunchy onion rings, clad in herbed crumbs, arrived stacked on a spindle. House-cut fries were fresh but unexceptional, bettered by the racy sauces. 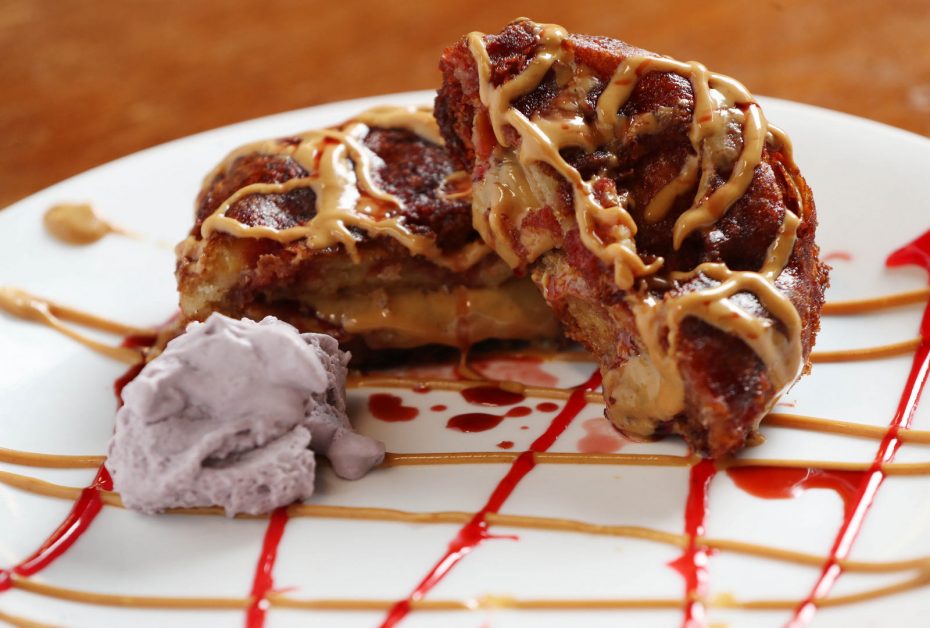 Save room for the decadence of a peanut butter and jelly sandwich ($4.99), battered and fried to a crisp, with salty peanut sauce, loganberry syrup, and best of all, whipped cream that triggers childhood memories of grape Kool-Aid. For another $1.49, get it with a scoop of ice cream. You didn’t come this far to hold back now.

For a double-fisted burger experience that delivers a full Nelson of flavor, Stack Burger’s just the ticket. 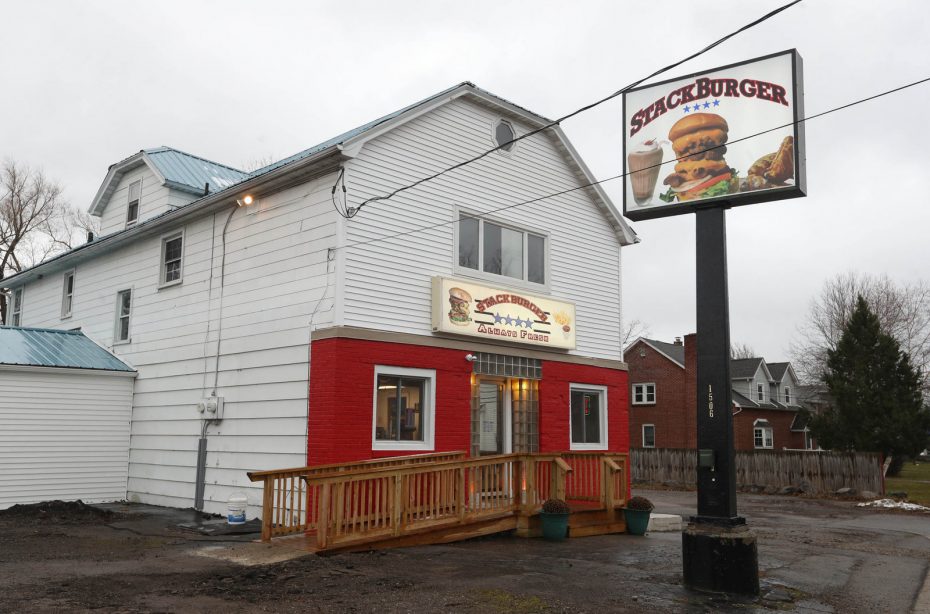