Students trickled into the room and settled in for another Monday night class of talking politics and public policy with the man in the dark suit and white dress shirt who sat waiting for them at the big table.

It was Byron W. Brown, mayor of Buffalo.

Except, for the students in this political science class at SUNY Buffalo State, he’s Byron Brown – adjunct professor.

“Justin,” Brown said to the student next to him, “you had some pretty strong feelings about this in your commentary.”

The student then explained his frustrations with big money taking over elections.

And so it goes each Monday night, between 6:30 and 8:15, when Brown co-teaches this master’s level course in U.S. public policy with Laurie Buonanno, a professor of public administration and nonprofit management.

Buonanno uses part of the class to teach theories of public policies, then turns it over to the mayor who offers students some practical insight beyond the theory and a peek behind the curtain.

“It’s a pretty cool opportunity,” said graduate student Gordy Stewart, 32, who’s involved in Niagara Falls politics. “The coolest part is talking about the different subject areas and then getting real-world experience from the mayor.” 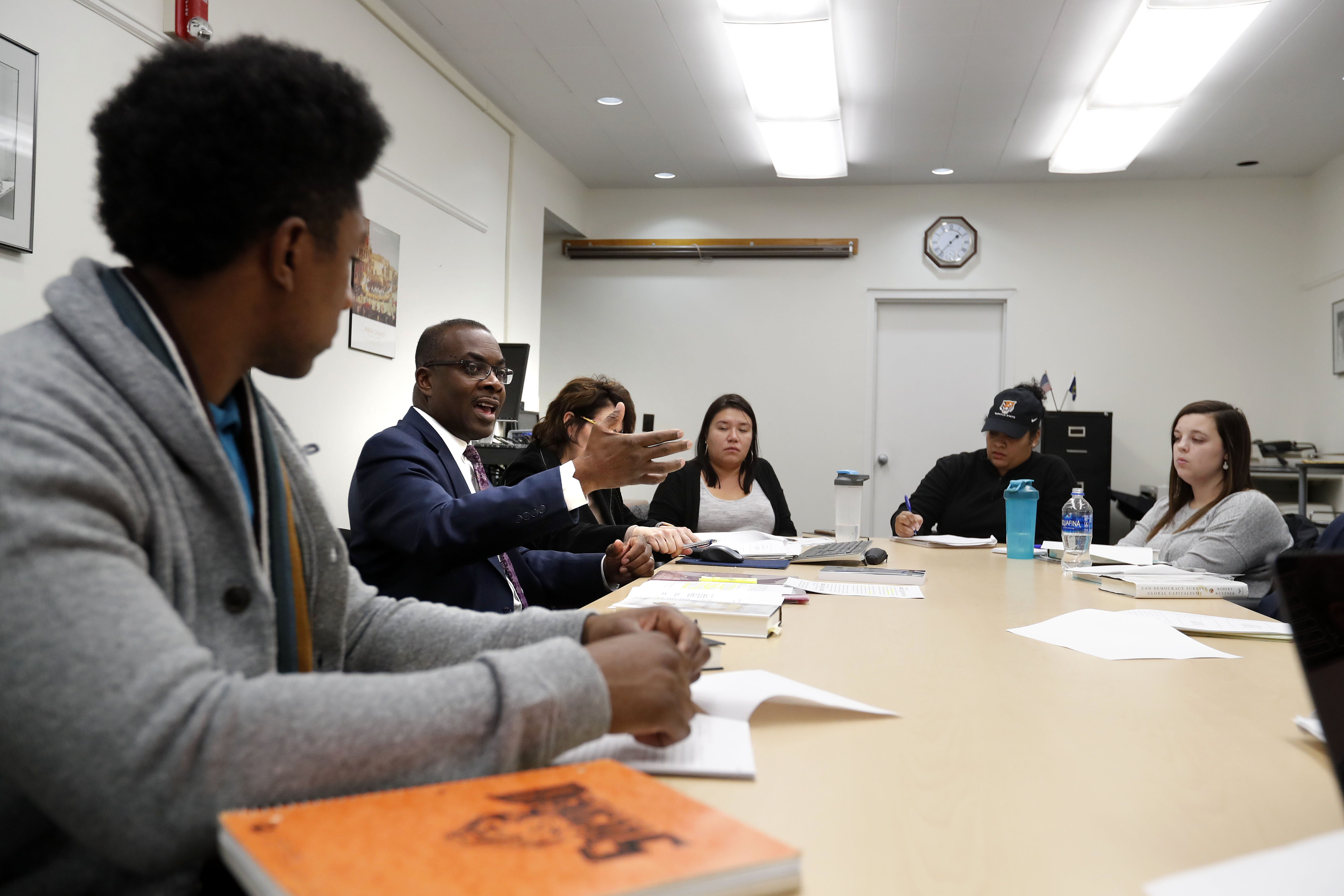 “I bring a lot of what’s going on in City Hall to this class, what’s going on in the State of New York, how the city intersects with state government, how we interact with the federal government,” Mayor Byron W. Brown says about the class he co-teaches at SUNY Buffalo State. (Mulville/Buffalo News)

Classroom discussions are frequently ripped from the day’s headlines.

In one class, the conversation might turn to the ticket surcharge the mayor proposed for cultural and sporting events to cover the city’s cost for maintenance and security.

In the next, it could be a discussion about the discord between the mayor and City Comptroller Mark J.F. Schroeder.

And what’s going on over at the Buffalo Municipal Housing Authority, anyway? That was covered, too.

“One time, he role-played,” Buonanno said, “so he had the students play his commissioners and he brings in thorny subjects, like the Buffalo Municipal Housing Authority, and had them advise him on what to do when the search was going on for the executive director.”

A few years back, Brown co-taught a couple of semesters of metropolitan government at Buffalo State, his alma mater. He had to give it up when he was appointed to the State University of New York Board of Trustees.

When he left that role, Buonanno approached the mayor about co-teaching the U.S. public policy course with her, so that students also get a state and local perspective.

In fact, when grad student Justin P. Garrett was registering for fall classes, he did a double take when he came across the course with the mayor.

Brown and Buonanno piloted the course this fall, so it’s a small class – six graduate students and two undergraduates.

But there’s a lot of discussion, and the students have taken advantage of the opportunity by asking the mayor plenty of questions, Buonanno said.

Senior Yakenna Burse was surprised by the mayor’s candor.

“He’s very honest about a lot of things going on,” Burse said.

Each week, students have to submit commentary on their selected reading, and were surprised to find the mayor not only reads their opinions, but presses them for more.

“He’s open to what you have to say and does take it into account,” said junior Francis Malone, 20.

On this night, the topic was trade, taxation and the Robert Kuttner book “Can Democracy Survive Global Capitalism?” that the class is reading.

“If the mayor’s willing, we’ll do this every fall – U.S. public policy with the mayor,” Buonanno said. “I’d like to see him even get more involved, but I know he doesn’t have that kind of time.”

The mayor said he enjoys it.

It was just after 8 p.m. when Buonanno ended class a little early. The mayor picked up his class materials, told the students to have a good evening and walked out of the room.

The final class of the semester was Monday, before next week's finals – which have their own twist.

“They’re each doing a policy brief and they’re presenting it, so this is where the rubber is really going to hit the road,” Buonanno said. “Presenting their policy brief for the mayor – that’s a little nerve-wracking.”

Brown unloads on critics, cites city's progress: 'I am the CEO of the city'