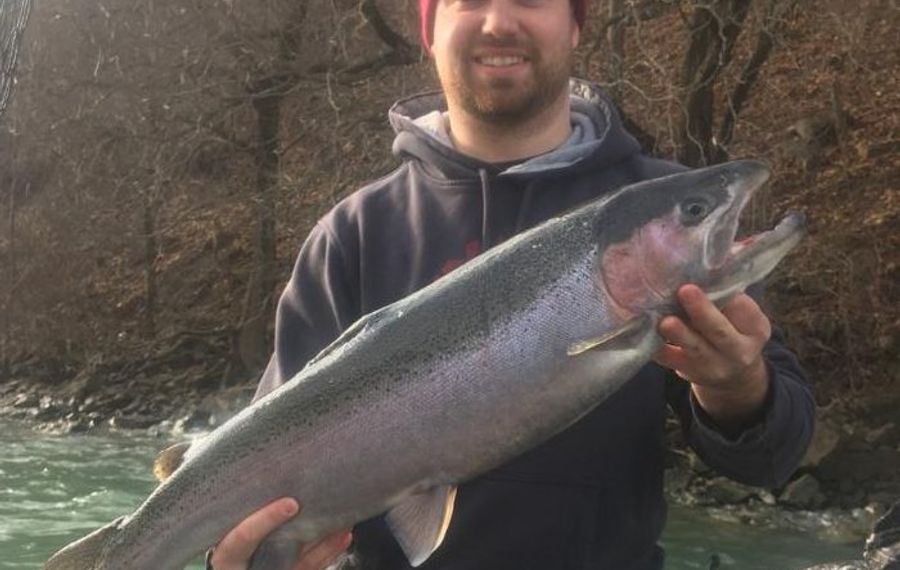 December can be a difficult month to fish in. You have to take what Mother Nature can give you. Despite some turbid conditions as the month kicked off over the weekend, many of the tributaries, as well as the Niagara River, were producing some nice fish – trout, muskellunge, salmon and even a few perch. Take what you can get.

When you encounter a warmer day, melting snow can contribute to colder water conditions, putting fish down and making them sluggish according to Scott Feltrinelli of Ontario Fly Outfitters. Using that approach, make sure you fish “low and slow.” Feltrinelli says to get your offering in front of the fish as they are less apt to chase baits or flies in colder temperatures. Steelhead is your primary quarry but Feltrinelli hit a nice Coho salmon hitting the Lake Erie streams last week – a good surprise for his morning efforts.

Skip Bianco at Hogan’s Huts reports that some of the tribs in Chautauqua County have been fishing well for trout. Barcelona Harbor is also producing some trout for shore casters with spoons and spinners.

The upper Niagara River musky fishing season ended with a bang for a few that stuck it out the tail end of last week. John Anthone of Sanborn reeled in a 47-inch muskellunge that tipped the scale at better than 30 pounds to help close out of the season on Nov. 30. Shore fishing folks were doing well in the lower river even though the water was stained from the storm last week.

Guys like Mike Rzucidlo of Niagara Falls were hitting steelhead and walleye in the gorge using a mix of egg sacs, spinners and jigs. There was 3 feet of visibility on Tuesday morning. Now that the New York Power Authority fishing platform is closed for the season, guys like Mark Plennert of Niagara Falls hit the Artpark area with Super Vibrax and caught some steelhead, as well as a few late-run salmon.

Brown trout have been consistent for anglers using egg sacs and smaller wobbling baits like Kwikfish and MagLips. The new steelhead division leader came to the boat over the weekend in the Capt. Bob’s Outdoors Fishing Contest. George Baumann of Williamsville took over the lead with a 32-1/4-inch steelhead caught in the gorge on Sunday while fishing with Capt. Matt Gantress of Unreel Fishing Charters. He was using a pink bead, fished off a three-way rig.

In the Niagara Musky Association John Henning Memorial Musky Contest last Sunday, Andrew Lacko of Kenmore took top honors with a 41-inch fish caught on a Bondy bait. It was the only fish caught for the event held last Sunday in the lower Niagara River. Musky season continues in the lower river and Lake Ontario until Dec. 15. Lake trout season is now open on the Canadian side of the lower river, closed until Jan. 1 on the New York side of the river.

Weather conditions have not been the best with a mix of rain, snow, wind, warm and cold temperatures. Not too many anglers have been hitting the streams according to Karen Evarts at the Boat Doctors in Olcott but for those that are making the effort to wet a line, they have been rewarded with some nice brown trout, a few steelhead and even some late salmon. Spikes and wax worms are the baits being talked about most, usually tipped on a small jig and fished under a float.

Some anglers like Ethan Bronschidle of Newfane are tying up fresh egg sacs to catch their fish. Again, fishing your bait slow with the slightly cooler conditions could help increase your chances for a hook-up. In Orleans County, all the streams are showing retreating water levels and stained (but fishable) conditions according to Ron Bierstine with Oak Orchard Tackle and Lodge. Look for good fishing later in the week for post-spawn browns and a few steelhead mixed in. Smaller streams should be good to try and target this weekend.

The perch bite is starting to pick up in some of the bays. Irondequoit Bay saw decent numbers but you had to weed through some of the smaller ones. Sodus Bay was seeing good numbers of 10 to 12 inch fish. Speaking of salmon, the Lake Ontario Trout and Salmon Association’s Salmon School for Jan. 19, 2019, is sold out. See Scattershots on how to get on the waiting list.

Skip Bianco at Hogan’s Hut reports that when the boat launches are open, some boaters have headed out to vertical jig for walleye in some of the deeper holes or fish for perch along the weedline around Bemus Point/Stow Ferry, Long Point State Park from the marina to the north side of the points, and the canals at Tri-James/Vukote area. There was ice from Lakewood to Celoron, but it was gone with the recent warm up. Ice will be back soon. At night, some walleye guys have been casting spinnerbaits.