Architects, planners, artists and students from around the world are on the clock.

Their charge? Bridge the gap between dreams and conceptual ideas for how to turn Buffalo’s former DL&W elevated rail line into a linear trail and greenway.

Their ideas will be considered during the Western New York Land Conservancy's international competition for project ideas, which launched Nov. 16.

Some 50 teams from 17 countries have already registered for the competition.

“Israel. Kuwait. United Arab Emirates. India. Italy. Germany. Poland. Austria — we got today,” said Anthony Armstrong, the project manager, during a Buffalo News editorial board meeting. “There is just a tremendous range of people who are interested in contributing ideas to what happens here.” 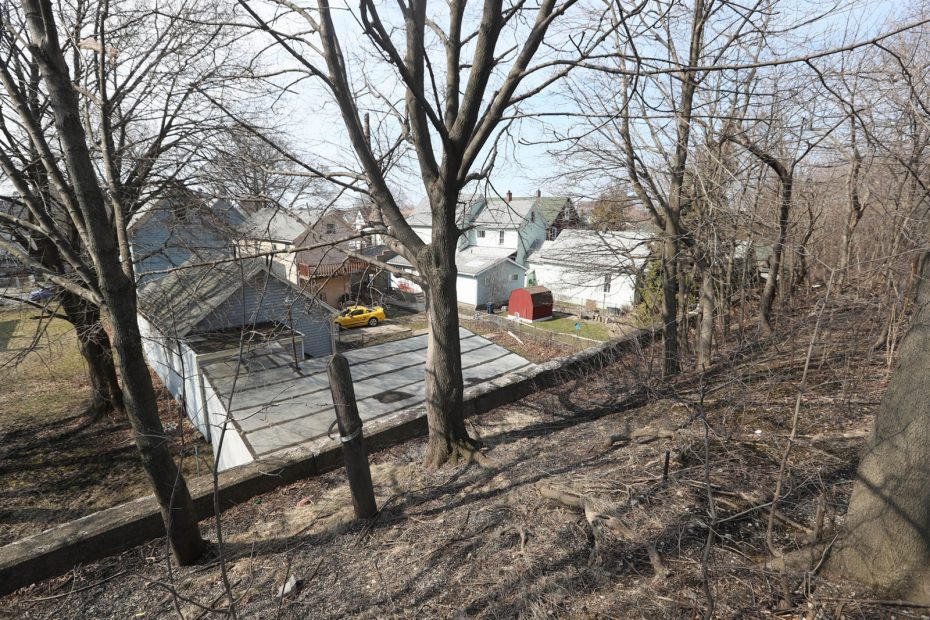 Areas of the proposed development of the DL&W linear park would overlook the Old First Ward neighborhood. (Sharon Cantillon/Buffalo News)

Each team must submit two posters with its ideas about how to best reuse the 1.5-mile corridor that connects Canalside with RiverBend. Applicants must concentrate on connecting neighborhoods with one another and connecting residents with nature and wildlife habitats.

Submissions are due in mid-February. The land conservancy plans to reveal them at an exhibition this spring.

“The opportunity here is really profound for the region and the neighborhood,” Armstrong said. “We know that access to nature makes people healthier and happier, both physically and mentally.”

Land conservancy officials say it's hard to know how much the project could cost, but told The News some early rough estimates for construction could run as high as $21 million, if including restoration of elevated bridges across the route. Also, $10 million to $20 million more would be needed to set up an operation and maintenance investment fund for the future stewardship of the corridor.

The land conservancy floated the idea of an elevated park like New York City's famed "High Line" more than a year ago.

The Niagara Frontier Transportation Authority owns the corridor and is on board with the proposal.

The conservancy launched its design competition earlier this month.

A jury of community leaders and experts will select winning designs. Winners will receive cash awards.

"We worked really hard on that jury," said Nancy Smith, the land conservancy's executive director. "I think that's what's drawing that many participants just 10 days out from the launch."

The land conservancy already has scheduled some programming along the corridor.

There's often confusion among the public between this project and plans to refurbish the DL&W terminal at Canalside, land conservancy officials said. They're separate proposals being administered by different entities.

The land conservancy is overseeing plans to revitalize the trail while the NFTA is planning the terminal project.

To differentiate between the two, the land conservancy plans to announce a new name and branding for the corridor park project by mid-2019, Smith said.