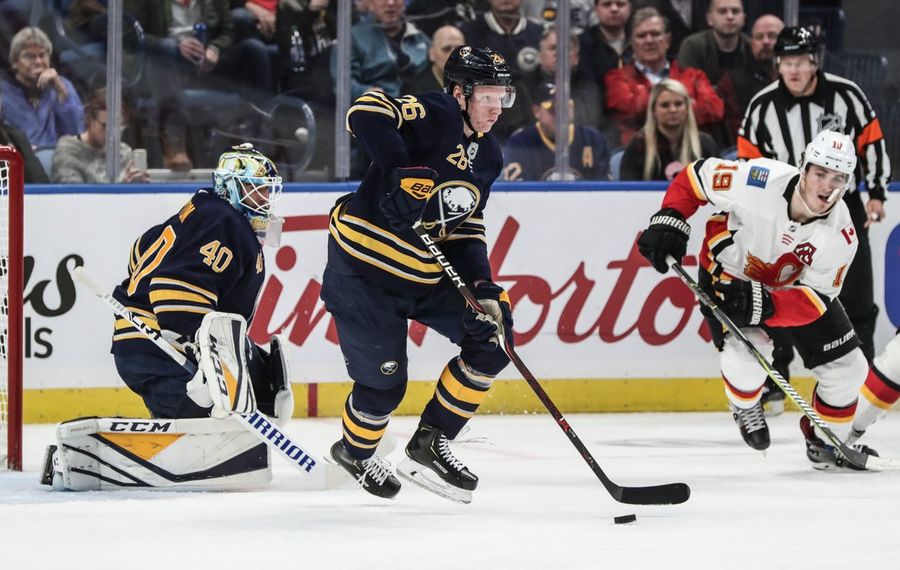 NASHVILLE – Rasmus Dahlin's influence is growing. The 18-year-old was named the NHL's Rookie of the Month on Saturday and it's no coincidence the Buffalo Sabres' defense corps has made a huge leap in productivity this year with the No. 1 overall pick in the lineup.

After a four-point October, Dahlin had 10 points in 15 games in November. He currently leads all rookie defensemen with 14 points this season (two goals, 12 assists).

"It's affected our group immensely," coach Phil Housley said after practice at Centennial Sportsplex near Vanderbilt University. "Not only so much from the scoring aspect, but just our breakouts are a lot cleaner. He can make a play in tight areas which allows us to get out of our zone quickly and that's the biggest thing I think this year is different from our defense."

The Sabres have gotten plenty of offense from their blue line. Heading into Monday night's game against the Nashville Predators in Bridgestone Arena, Buffalo defensemen have 14 goals and 61 points this season. They entered Sunday tied for fifth in the NHL in goals and eighth in points – after finishing dead last in both categories last year.

NO REST ON DEFENSE

"Night in and night out, the 'D' have been huge contributors, scored some big goals and ultimately helped win some big games," said Nathan Beaulieu, who has three goals to tie Rasmus Ristolainen for tops among the Buffalo blueliners. "Bringing in someone young like him has given us a spark, helps us forget about last year and not worry about making mistakes. We're all good offensively. Just go out and play with swagger."

The Sabres have gone slow with Dahlin. Housley and assistant coach Steve Smith have monitored his minutes, letting him go over 20 just four times in the season's first 18 games. Dahlin has exceeded 20 minutes eight times in the last nine.

"If I play good, I get more minutes," Dahlin said. "They had a plan and they've done a great job and I thank them."

"He's really adjusted well to the North American game," Housley said. "That's what we were thinking about when he came to development camp and training camp. He's done a good job playing with different partners, adjusting to that, playing on the left side and the right side. And it's good to get somebody from our team recognized, too. It's been well earned by him."

Getting Dahlin in the draft lottery was a boon for Housley, who had defensemen releasing to create goals at will when he was an assistant with the Predators and couldn't get much out of the Sabres last season. Even with the injured P.K. Subban out of the lineup, the Predators still lead the NHL this year with 71 points from their defense.

"We really wanted to improve in those areas and 'Smitty' has been a calming influence back there," Beaulieu said of Smith, a three-time Stanley Cup champion in Edmonton. "He played a long time and understands mistakes will be made. Now we're not so worried about making them. We're capitalizing on opportunities. We all skate so well and the game is so much about skating nowadays. He's had that influence on us and that's helped a lot."

"Mistakes will happen," Dahlin said. "If I make a mistake keep looking forward and it will get better."

Housley has liked how the defense has been breaking down the ice in the rush and even joining cycles down low in the offensive zone. Beaulieu has capitalized on open ice, getting right to the goalmouth for two of his goals. He burned San Jose on Tuesday, tapping home a pass from Sam Reinhart after streaking down the left wing from center ice all the way to the crease.

"I've been watching a lot of video and I just want to try to get my offensive flair back finding holes and seeing where opportunities present themselves," Beaulieu said. "Seeing that much ice ahead of me and knowing I'd be able to get there was great. You know what was going to happen from the neutral zone going wide. Breaking down video has been big for me."