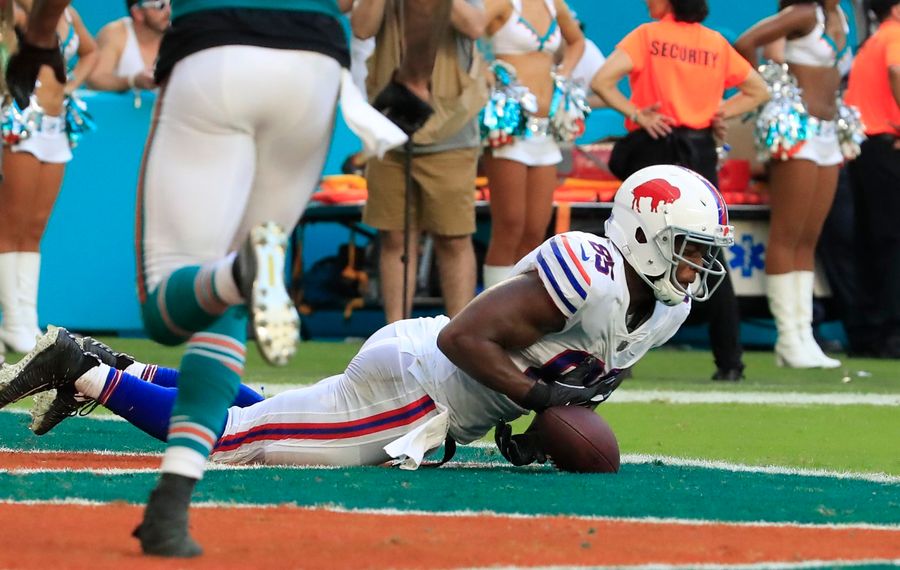 Don’t tell him it was a tough catch to make. Don’t even suggest that the tight end had company in letting the Buffalo Bills down Sunday.

Regardless of how anyone else saw a sloppy performance in which other Bills players made costly mistakes and his team had 13 accepted penalties for 120 yards, Clay wanted to put the 21-17 loss against the Miami Dolphins firmly on his shoulder pads.

Actually, he wanted to put it on the hands that came up just shy of grasping Josh Allen’s throw in the end zone on fourth-and-11 from the Miami 30 with 1:05 left.

“It was a good ball by Josh,” a somber Clay said in a quiet Bills dressing room. “I just didn't come down with it. And it’s not much more than that. You’ve just got to catch it. That’s why you put in all the work.

“You’ve just got to make a play in that situation, and I didn’t. I feel like I let everybody down, so I’m going to go back to work once we touch down (on the return flight home). It’s going to be a tough film to watch, but it’ll be all right.”

These are the parts that will make the Bills cringe:

At 4-8, the Bills are assured of at least having one fewer win than a year ago, when they went 9-7, and are all but officially eliminated from making a second consecutive postseason appearance.

On the plus side, Allen made some significant strides in his second start after missing four games with an elbow injury. In what arguably was his best full game of the season, he completed 18 of 33 passes for 231 yards and a pair of touchdowns to Zay Jones. He also had two interceptions, although one came on a desperation throw at the end of the first half.

Some of the biggest damage the rookie did to the Dolphins’ defense came with his feet. With 135 yards on nine carries, he broke the Bills quarterback rushing record he set seven days earlier with 99 yards.

More than anything, Allen showed that besides being an exceptionally talented athlete who can throw the ball a mile and outrun most defenders, he has a competitive spirit that is second to none. While his skills are still fairly raw, that part of his game is all grown up and it’s why the Bills had a chance to pull out a last-minute win.

“He’s a bad boy,” running back LeSean McCoy said. “For him to be so young, just taking control, throwing the ball, running the ball. He wants that moment (of) greatness. Fourth quarter, down four, need a touchdown, just to be a part of that.”

That was why, on the Bills’ final play, Allen scrambled from side to side, weaving his way backward to find the time and space to heave the ball toward the end zone. He did. And Clay was all by his lonesome, on his knees. The ball came down just short of his outstretched arms and bounced away.

“The ball came out of my hand real bad,” Allen said. But Clay stuck to his position that he was at fault. “It’s just one of those you’ve got to finish the play and I didn’t,” he said.

The bottom line is that the Bills aren’t a good enough team to make as many mistakes as they did from start to finish and expect to win, even in last-gasp fashion.

Bills backup quarterback Matt Barkley said Allen made a huge jump from a week ago, when, mostly through his running, he led the Bills to a 24-21 victory against the Jacksonville Jaguars.

“I think just getting through his progressions and using his legs when he has to,” Barkley said. “He’s pretty unique. He sees everything. He’s a rookie in experience, naturally, but in regards to what he sees and how he processes plays and his knowledge of the offense, it’s past his rookie year.”

Only one of Allen’s runs against the Dolphins was by design. He either took off when he wasn’t able to find an open receiver or was looking to avoid pressure.

“If you want to rush three and spy him, then he has all day to throw the ball, which you don't want to give up,” Alexander said. “So you definitely have to have a good pass rush and you kind of just find your spots and try to get him off. But he’s a big, strong guy and I think he’s more athletic than people give him credit for. And it's hard to defend guys like that, because he's shrugging you off and still has the ability, when you have guys hanging off of you, to throw the ball 40-50 yards down the field on a strike.”

Dolphins defensive end Cameron Wake said forcing Allen to run meant that the Dolphins were getting pressure, but noted that Allen found open spaces to get yardage.

"It’s going to be a lane somewhere and good guys are going to find it," he said. "He got out there a couple times. But again, pick your poison: you want them throwing it or you want them running it? I think over the course of a game you can look at it either way. But it was exciting to say the least. I’ll say that."

Of all of Allen’s passes Sunday, the best was his longest, a 38-yard completion to fullback Patrick DiMarco on a wheel route that helped set up a field goal to cut the Dolphins’ lead to 14-9 early in the third quarter.

“That’s a tough throw,” Barkley said. “I don’t think people realize that ball is to put touch on it but then to just drop it in the bucket. He’s improving a lot as far as pocket passes and not just firing it into windows.”

Despite the loss, there is reason to think the Bills will have better days ahead with Allen.

“It’s scary to see him grow, what type of player he can be,” McCoy said.