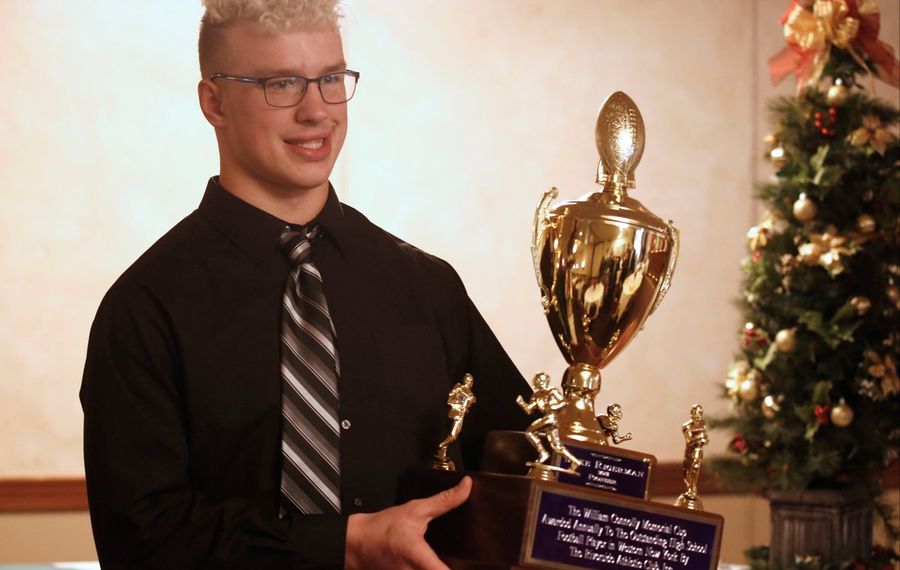 When Pioneer football coach Jim Duprey asked Mike Rigerman to move from tight end to running back, he did so for the good of the Panthers — hoping a steady dose of his best athlete toting the rock would just make them a tough out.

The move achieved that, and some history.

The 6-foot-3, 235-pound Rigerman captured the 47th Connolly Cup Award, an honor bestowed upon the top high school football player in Western New York as chosen by the Riverside Athletic Club and ADPRO Sports. Among a group of 10 finalists, including three returnees from 2017, Rigerman earned the award after having a dynamic season on both sides of the ball for the Panthers (9-1), who captured the Class B1 division title and won their first nine games en route to securing a spot in the Section VI final.

The running back/linebacker led Western New York with a school-record 2,116 yards rushing and also scored 29 touchdowns. He also made 101 tackles and three interceptions in becoming the first Pioneer player to ever win the Connolly Cup.

“It means a lot to me and my family my coaches and especially the Pioneer community,” Rigerman said. “It’s not just me that got me here. It was my teammates. I’d like to thank them and my coaches and my mom and dad for always believing in me and pushing me to be the best person I can possibly be.”

Rigerman earned the Cup over a list of talents that included 2018 Buffalo News Player of the Year Shaun Dolac of West Seneca East and repeat finalists Aaron Wahler of Cleveland Hill, Cole Snyder of Southwestern and Keshone Beal of Cheektowaga. Other finalists were Aaron Chase of Starpoint, Alex Card of Southwestern, Dylan Kelly of Williamsville North, John Speyer of West Seneca West and Jake Ritts of St. Francis.

“I was just surprised to be the winner of this,” said Rigerman, a Buffalo News first team All-Western New York pick at running back. “I was very surprised because there are a lot of good players here.”

The selection committee for the Connolly Cup only considers the first 10 weeks of the season in determining their 10 finalists with the voters then picking a winner out of that group. Committee members who have seen at least 10 games of each finalist and have seen at least eight of the final 10 cast secret ballots via points system (10 for first, 7 for second, 5 for third, 3 for fourth and 1 for fifth).

Rigerman and Dolac were among four finalists to receive multiple first-place votes in the final tally, according to committee chairman Dennis Sarow. The others to receive first place votes were Chase and Snyder.

“It was down to the wire,” said Sarow, who does not vote.

This is the first time since 2014 the News Player of the Year and Connolly Cup Award winner have been different players. That year, T.J. Wheatley of Canisius earned the News honor, while Jamestown's Stephen Carlson captured the Connolly Cup.