Somewhere in the depths of a 2-10 season in 2016, Lance Leipold came to an unsettling realization.

He reached a crossroads at the University at Buffalo, two years after winning his sixth Division III football championship. Leipold wanted to build a successful FBS program, the ultimate career challenge for a person whose life has revolved around athletics and coaching.

“I was letting people down,” Leipold said.

The Bulls had six wins in less than two years, and the program was slowly healing seven months after defensive end Solomon Jackson died in March 2016 after a heart-related collapse during a conditioning workout. Some days, Leipold wondered if he had lost his players. Leipold, however, wasn’t going to lose himself.

“People talk about winning and losing, but there was no way I expected to come here and we were just going to, all the sudden, snap our fingers and things happen,” Leipold said. “It’s humbling, sure, but it was a test. We wanted to take this test. I knew it’d be bumpy. I didn’t know how much and how long.”

He also knew he wouldn't give up. He believed in what he had accomplished as one of the nation’s winningest Division III coaches, and he had faith in the philosophies he was implementing to create a new culture at UB.

Two years later, the Bulls are 10-2 and face Northern Illinois at 7 p.m. Friday in Detroit for the Mid-American Conference title, their first conference championship game since 2008. On Sunday, UB will find out its first bowl destination since 2013. 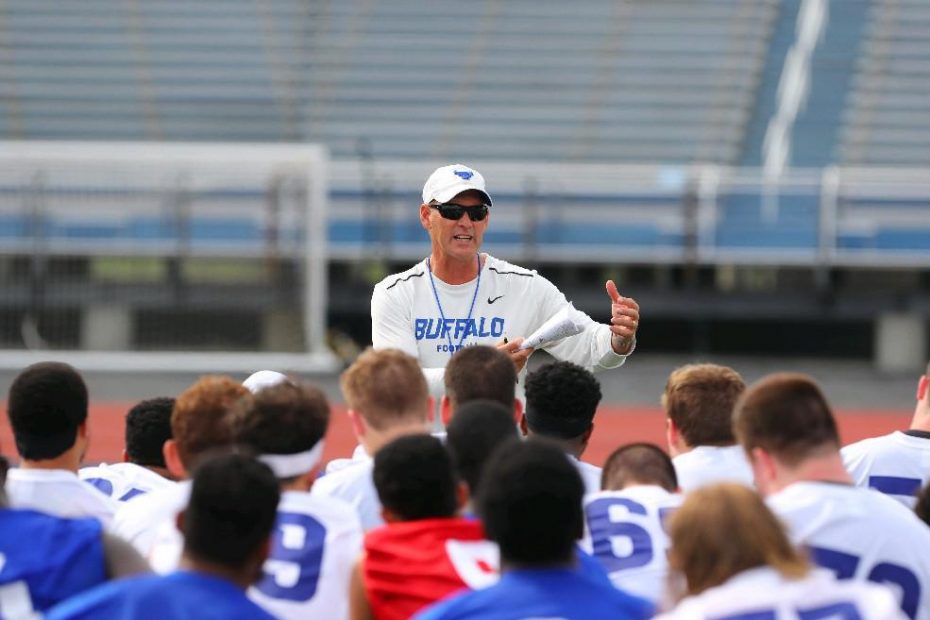 UB football coach Lance Leipold talks to players after the first day of practice at Alumni Stadium in Amherst on Aug. 3, 2018. Leipold has created a culture that fosters accountability with encouragement. (John Hickey/Buffalo News)

“Leading through difficult times is incredibly challenging, and 2016 wasn’t easy,” former UB athletic director Allen Greene, who worked with Leipold for three years, wrote in an email to News. “It’s frustrating and easy to question yourself. That said, I was impressed by Lance’s ability to see beyond the record and focus on shaping the culture for the future.”

Leipold has fostered a culture that balances accountability with encouragement. It draws players from a recruiting reach that now includes football hotbeds in Georgia and Florida as well as players from New York, New Jersey and Maryland. On the field, Leipold emphasizes speed and athleticism among versaitle players and uses resourcefulness as a means for productivity.

“I always believed in coach Leipold’s vision,” said UB linebacker Khalil Hodge, a junior-college transfer from Northern California. “Nothing has really changed since the very start, since my first season here. We kept plucking away, kept working and kept believing in what the coaches were telling us. We gradually saw change, and now, we’re excited to be a part of that change.”

Hours after UB announced the dismissal of coach Jeff Quinn in October of 2014, Danny White took a strategic approach as he formulated his short list of candidates to take over the Bulls.

The former UB athletic director wanted to get ahead of other programs that would make coaching changes later that year, but he also wanted to find the right person to fill the Bulls’ void. He wanted a team that was faster and more mobile, a team of athletes as opposed to just football players.

When White met Leipold in his Wisconsin home — “The season was still going on, and I didn’t even ask him to fly to Buffalo,” White said. “There was no way that was possible.” — Leipold’s competitive personality grabbed White’s attention. Leipold's authenticity resonated with White, too, his passion for his family and how he crafted his football program into an extension of his family.

“What made Lance compelling was how much unprecedented success he had as a coach,” said White, who is now the athletic director at Central Florida. “We knew it was going to take several years to rebuild that program. 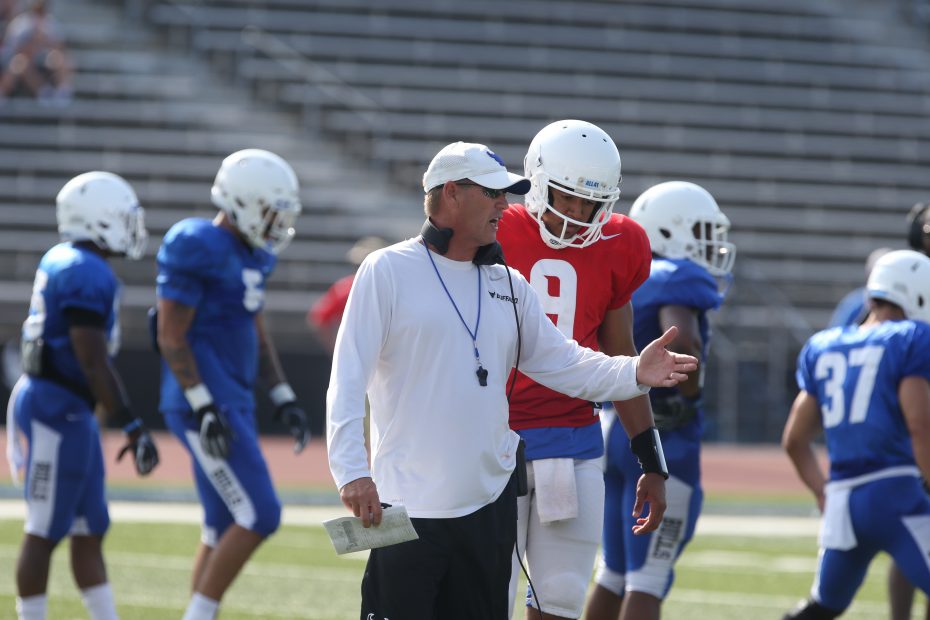 “But what I remember is how resourceful he was. At Whitewater, he had to do a little more with less. He had to wear a lot of different hats, and we had that at UB, too, so having a coach that could think outside the box was certainly a big help for us.”

Leipold was 109-6 in eight seasons at Wisconsin-Whitewater, and he did it with a fraction of what FBS programs have; Whitewater didn’t have the same athletes, the same facilities or the same athletic operating budget as a school like UB.

Whitewater coach Kevin Bullis said Leipold found a way to help finance a $2.5 million addition of a hydrotherapy room and overhaul the locker room to the Warhawks' team facility – a small but significant project for Whitewater. With the help of former Warhawks coach Bob Berezowitz, Leipold reached out to boosters and former Whitewater athletes, asking them to sponsor individual lockers in the team building.

“Lance is an action person,” said Bullis, who was Leipold’s defensive coordinator at Whitewater. “He has a plan of how to put something in action.

Leipold knew there was another professional challenge out there for him. He reflected on his early years as a coach, when he was an assistant at Nebraska-Omaha from 1994 to 2000. The Mavericks were 1-10, 3-8 and 10-2 in his first three seasons, a period he considers one of the most rewarding of his career because he and his coworkers were tasked with turning around a program. 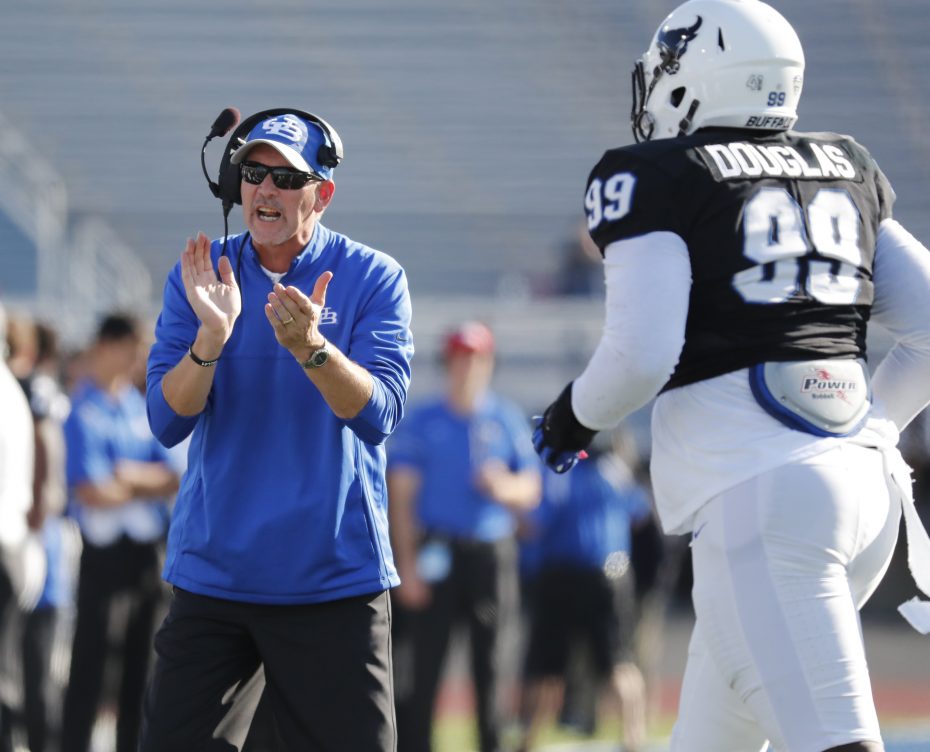 “You want to take on your challenge and build it yourself, so to speak,” Leipold said. “I never thought an FBS opportunity would come along. When it did, it was a no-brainer to me. Then, I had a conversation with (former UB coach) Turner Gill and he told me about his experience and about being here and working. It checked the boxes and I thought, hey, this is a great challenge and it’s a great opportunity.”

On Dec. 1, 2014, Leipold said goodbye to his players at Whitewater. He did it in a team meeting as soon as he returned from a visit to Buffalo.

Around him, his team broke into applause. Clapping. Cheering. Yelling.

Instead of begrudging Leipold for leaving them, they celebrated the reward of their coach’s success. Leipold stayed with the Warhawks as they won their sixth Division III championship in eight seasons.

“They weren’t selfish,” Bullis said. “Nobody wanted Lance to leave, but they were so excited for him. I got chills in my spine, at that moment. What they did, that showed the support we all had for him and the love we had for him as a coach, and how happy we were for him to have that opportunity.”

With the move to Buffalo, Leipold saw the chance to replicate that success in a bigger arena. Bullis didn’t doubt that Leipold would be successful. But success wasn't immediate in his new home.

The Bulls went 5-7 in Leipold’s first season. As Leipold led the Bulls through one loss after another in 2016, he only had one option: continue to follow the plan he had to make the Bulls successful.

“From the end of February, it was just trying to hold it together, the best we can, and try to keep instilling the consistency, the fundamentals, the discipline we wanted to have,” Leipold said of the 2016 season.

But the grief and the heartbreak that came after the death of Jackson, and the struggles in a two-win season, brought Leipold a new level of resiliency and clarity.

He and the Bulls had a breakdown. They could turn it into a breakthrough. Leipold counted on the support of his wife Kelly, his daughter Lindsey, and his son Landon. He turned to his faith, and then he asked himself: Are you doing the best you can?

The answer was clear.

“If you can look at yourself in the mirror and know you’re doing what you can, then you’ve answered it,” Leipold said. “After that, it’s meant to be.” 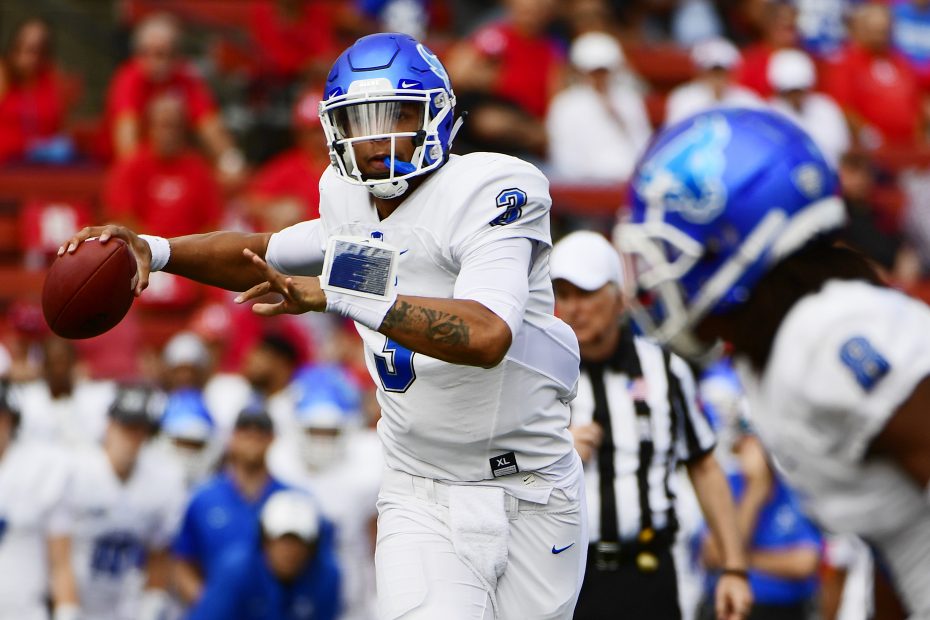 University at Buffalo quarterback Tyree Jackson and the Bulls faced Toledo in October in the Glass Bowl in Toledo, Ohio. (Photo by Corey Perrine/Getty Images)

That gave Leipold the resolve to try new things. In recruiting, he targeted well-rounded athletes from Michigan and Maryland, states not necessarily known for producing copious amounts of football talent. Quarterback Tyree Jackson is from western Michigan, and leading rusher Jaret Patterson is from the suburbs of Washington D.C. He brought in junior-college transfers, including Anthony Johnson, the Bulls' leading wide receiver, out of Iowa Western Community College; and Hodge, the team's leading tackler from City College of San Francisco.

He oversaw a redesign of the Bulls’ team meeting room. He added a strength coach. He played up the enthusiasm he saw in his players.

What struck Greene, who is now the athletic director at Auburn, was Leipold's intensity and ferocity as a competitor and his creativity, traits that he believes contributed to the success Leipold had at Whitewater, and now at Buffalo.

"He fights for what he believes is the best for his staff and players," Greene wrote. "I recall saying to recruits and their families, 'Lance and I talk almost every day and he’s a royal pain in my you know what.' But because I know he’s fighting to make the program better, I told him he’d be looking for a new job the day he stopped pushing me.”

'He wants the best for us'

The Bulls finished 6-6 in 2017. Six wins weren’t enough to earn the Bulls a bowl bid, but Leipold persevered and kept cultivating an environment that valued personal development as much as football success.

UB’s players learned under Leipold that change isn’t easy. But Leipold didn’t alter his style to refine the program at UB.

"He was always making sure everyone was doing the little things right,” quarterback Tyree Jackson said. “When you’re 2-10, some guys really don’t understand it or why, but now, our whole team understands that he wants the best for us, why he’s always on us and he wants to make sure we’re doing the little things right, so that it can show on the field.”

Hodge saw how Leipold and his staff preached the values of hard work, discipline and their emphasis on details from the first day he joined the Bulls in the summer of 2016.

“It’s been the same values that he’s instilled from the beginning, since that 2-10 season,” Hodge said. “Now that we’re winning, nothing has changed. They haven’t let up, any slack or anything like that. For him to continue to be on us, to make sure we’re doing things right, day in and day out, it’s what has really helped this transformation.”

Coaching, Leipold said, is akin to parenting: teaching life skills, balancing praise and criticism while trying to give structure that helps an individual succeed.

“It’s not tough love, but it’s consistency,” Leipold said. “I wish it would click for all of us at one time, but I always try to say that many things we do will make sense when you’re 35 or 45 years old, more than it does now.”

But to define Leipold as a person? Bullis has known Leipold for nearly 30 years, when they met as graduate assistants working at a summer camp in rural Wisconsin. He has to take a few seconds to articulate the essence of his former boss, his former coworker and, most importantly, his friend -- an essence that is reflected in what Leipold has built at UB.