But first, it has to take the property to the cleaners.

The Buffalo-based developer, owned by Nick Sinatra, is proposing a four-story condo building at 169 W. Utica, on the site of the former Cadet Cleaners dry-cleaning shop, which it acquired two years ago. Located on 1.12 acres at the corner of West Utica and Atlantic Avenue, the site was used for a self-storage facility from 2011 to 2015, and has been vacant since then.

Plans call for demolishing the 45,000-square-foot structure, remediating the site under the state's Brownfield Cleanup Program, and then starting construction on the new complex.

"It's just such a dirty site that there's no way we can retain the existing structure for residential use," said Sinatra Director of Development Amy Nagy.

The new 101,700-square-foot building would include one level of 95 indoor parking spaces on the bottom – part of which will be below grade because of the slope of the ground – plus another 13 spaces of surface parking. The entrance to the site will be off Atlantic, according to documents submitted to the city.

Four floors of condos, including some two-story townhome-style units, would rise above the parking, according to the plans by architects Carmina Wood Morris. The building facade would feature a combination of brick, fiber-cement siding, precast bands and simulated slate shingle, but Nagy said those details are not yet final. She said the top floor would be set back from the front of the building to minimize the impact on the street.

But unlike other developments Sinatra has undertaken, this would not be a mixed-use project, and will not have many other features, Nagy said. "It won't be a highly amenitized building," she said. "It'll be a traditional urban condominium project. It's an urban infill."

The offering circular to market the condos for sale must first be approved by the state Attorney General, so no prices or other details have been set. Nagy said the developer does not yet have a breakdown of the types or sizes of units.

The proposal culminates more than two years of evaluating the site to determine the best use for the property.

"It's taken some time to examine what we're able to do," she said. "It's a very dirty site. We took some time doing some investigations. We concluded this was the best approach for a number of reasons." 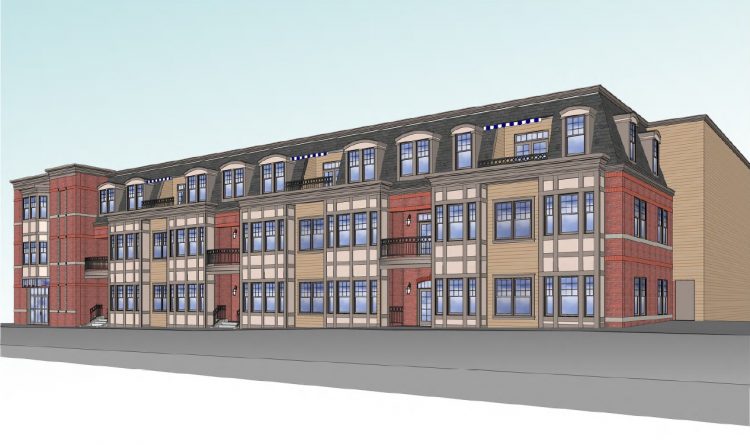 Sinatra is working on the project with Phil Nanula's Essex Homes of WNY, one of the region's largest homebuilders. The two firms are already collaborating on a redevelopment of a convent in Hamburg, and are also working together with Ellicott Development on the Elmwood Crossing reuse of the former Women & Children's Hospital property nearby.

The project – whose cost is still being refined depending on environmental factors and final design – will be funded in part through brownfield tax credits for the cleanup.

Sinatra is bringing the project to the Buffalo Planning Board on Dec. 3 to start the review process, which will include a public hearing at a later date. But the developer must first seek Preservation Board approval for the demolition of the early-1900s building that now occupies the site, as well as three variances from the Zoning Board of Appeals for the new building's height, the width of the existing lot, and the need to pave much of the site as part of the environmental cleanup.

Nagy said she expects the approval process will last at least into January. If all goes well, she said officials hope to start interior abatement in the existing dry-cleaner building during the winter, prior to demolition and site work in the spring. Construction would begin by late spring or early summer of 2019, with completion targeted for July 2020.