Indian food has a reputation for being painfully hot, which it came by honestly, since it includes dishes so fraught with chiles they earn me a stern rebuke from my digestive system. Yet it would be wrong to lump the culinary inventions of a billion cooks under the flamethrower tag, since its diverse cuisines include many dishes that have oodles of flavor, but no discernible heat.

Spices, yes – cumin, and cardamom, and cumin – but not enough chile to budge the needle on the old kick-o-meter. That’s what I was looking for when I had dinner at Kabab & Curry – comfort food just like grandma didn’t use to make – and that’s what I got. Flavor without fear.

Kabab & Curry has been serving its namesake dishes in Clarence since 2001, first on Transit Road. In 2014 it moved to Main Street, taking over the former Hirsch’s. It’s an Indian and Pakistani place, to be precise, but the distinctions between the neighboring cuisines are not emphasized in its menu. 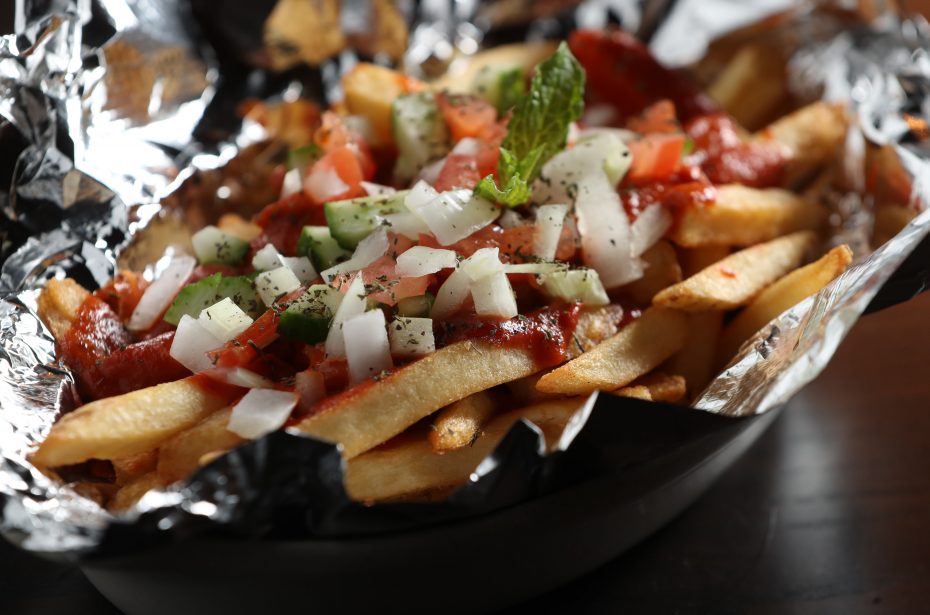 The menu is considerably leaner than the Transit version, sticking to Indian best-hits. One exception was an appetizer called makhani fries ($7.95), an American-Indian hybrid of french fries drizzled sparingly with makhani sauce, a creamy, sweet tomato gravy with a backbone of ginger and garlic. It was like curry ketchup, with diced cucumber, tomato and onions, plus a dusting of dried mint, for crunch and character. It was only a crumble of paneer, the Indian cheese, away from a South Asian poutine.

Pakoras ($4.95), golfball-sized fritters of potato, onion and spinach in chickpea batter, were well-fried, fluffy and greaseless. Vegetable samosas (two for $4.50), mildly flavored mashed potatoes and peas in a triangular turnover, were clad in pastry that was tougher than my favorite versions. 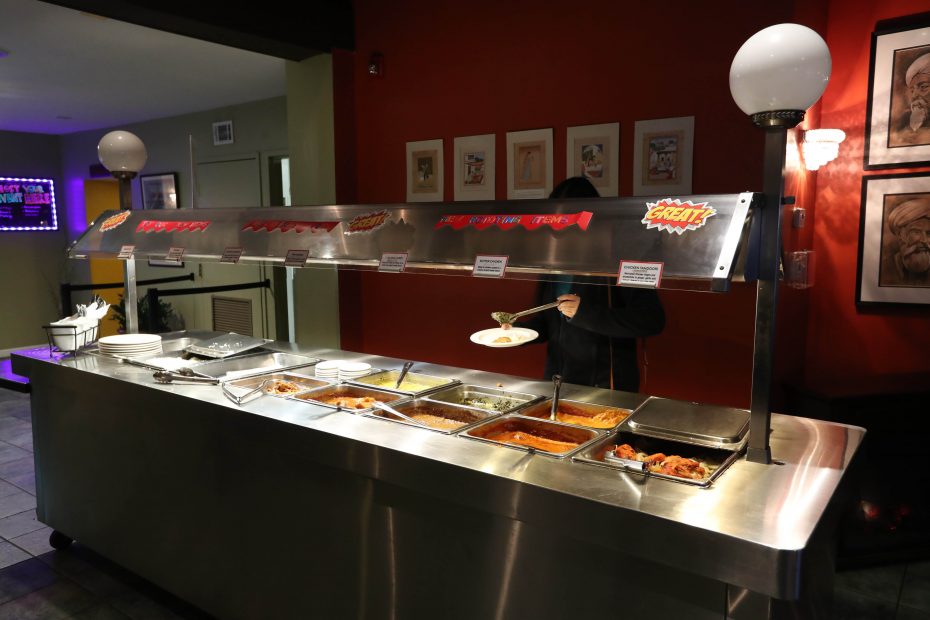 Both appetizers came with the house chutneys, brown sweet-and-sour tamarind, and green coriander, with cilantro and chiles for a helping of heat. Since I asked for all the adjustable-heat dishes to be served mild, this was the spiciest thing on the table.

Dosas, crispy lentil-batter crepes rolled into bazooka-caliber tubes and served with tomato chutney and lentil soup, were a strength of the Transit location. On Main Street, the dosa arrived floppy and bedraggled, to be pushed to the edge of the table and forgotten.

There were plenty of other pleasures to pursue. Beef seekh kababs ($14.95) were sticks of ground beef enlivened with ginger-garlic puree, onion and cilantro that arrived sizzling on an iron platter that had well-caramelized its foundation of sliced onion. 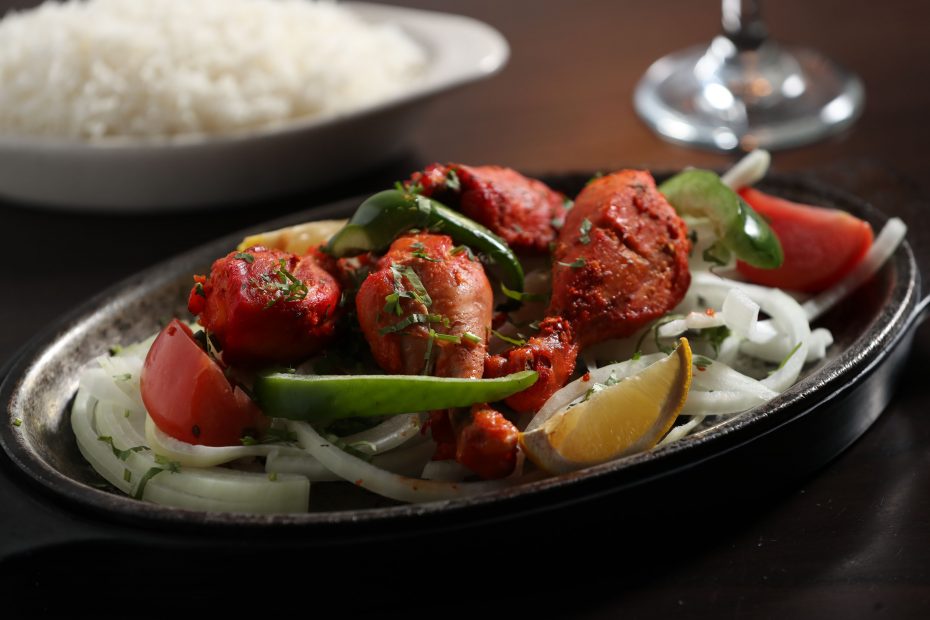 Pieces of tandoori chicken ($17.95), bone-in legs and breasts savory from their long soak in piquant yogurt and spices, were edged with char after their ride through the intense heat of the tandoor oven. Lamb tikka ($17.95), skewered chunks, arrived overcooked and chewy.

Ivory-colored gravy scented with cardamom and thickened with ground cashews served as a fine backdrop for fat crustaceans in the shrimp korma ($15.95). Plenty of the velvety, subtly nutty sauce ended up spooned out over fluffy, fragrant basmati rice.

The farthest Kabab & Curry’s menu ventures is goat karahi ($16.95). You can order the dish with boneless lamb, chicken, beef or shrimp, but when’s the last time you let someone get you goat? It’s practically indistinguishable from lamb under brief cooking, but well-simmered goat has an earthy undertone that makes its own sauce better.

Karahi style, popular in Pakistan and northern India, means chunks of bone-in meat have been simmered in a tomato sauce that’s been fortified with heaps of garlic and ginger. The bones made for slightly more involved eating, but the flavor was worth it. 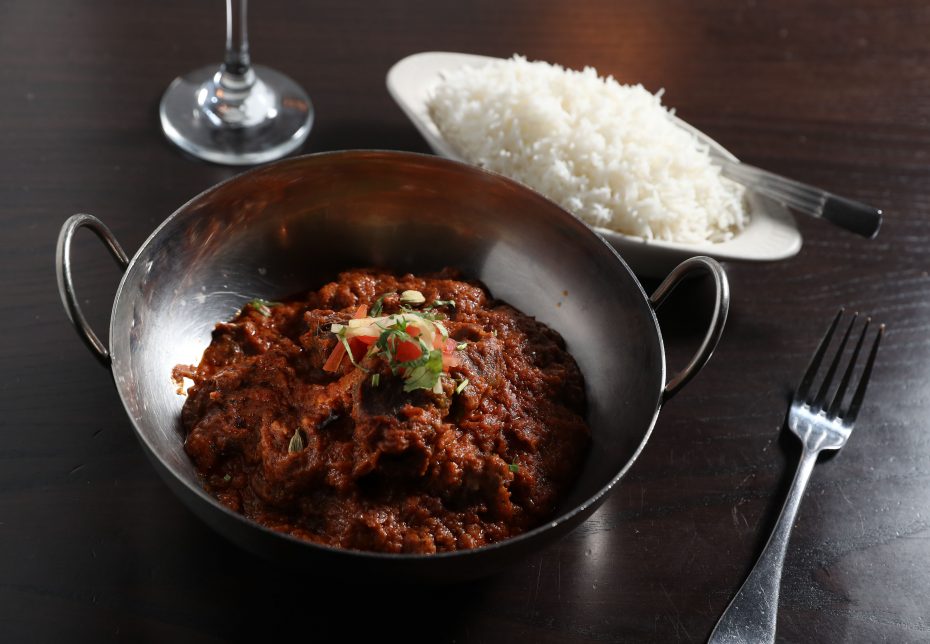 The curry side held its own, though. Gobi aloo ($12.50), potatoes and cauliflower in a tangy tomato sauce bright with turmeric and speckled with cumin seed, was a vegetarian hit. Smoky roasted eggplant sweetened with long-cooked onions made the baingan bharta ($12.50) especially satisfying.

When it comes to desserts ($4.95), kheer, the soupy rice pudding, is reliable. But Kabab & Curry has more exotic treats to consider. Ras malai is a disc of crumbly unsalted cheese in a sweetened rosewater-scented cream. The mango version of kulfi, a denser, intenser ice cream, was resonant with tropical fruit. And there's  gajar ka halwa, my favorite, a pudding of shredded carrot simmered to toffee stickiness in sweet brown butter, and served piping hot.

So if you’ve had your fill of stuffing sandwiches, you can seek comfort at Kabab & Curry. Take a walk on the mild side.

Gluten free: many items are on clearly marked menu. 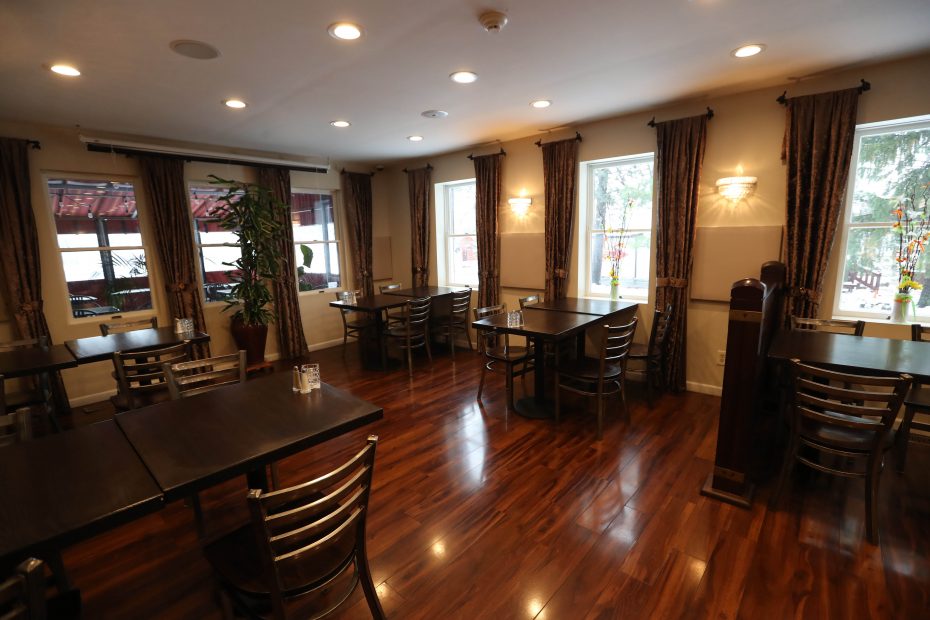