Bob Pawelski's mother sent him out to the garage of her Hamburg home three years ago for holiday decorations and he ended up forging an unexpected connection with his long dead grandfather.

As Pawelski rummaged through boxes, he says he "uncorked" a Tupperware container and discovered  a "dusty vinyl pouch" containing the World War I journal of Louis Pawelski.

"It was like a message for me from my grandfather in a time capsule," said Pawelski, who was born a few months after Louis had died in 1958.

The 59-year-old grandson said he gently thumbed through the nearly crumbling handwritten pages that told of a war fought a century ago against the Germans.

Army Pfc. Pawelski wrote about life in the trenches on battlefields in France, inhaling poisonous gas, looking up to see enemy spotters perched in hot air balloons and a ticktock account of how the war famously ended 100 years ago on the "eleventh hour of the eleventh day of the eleventh month" in 1918. 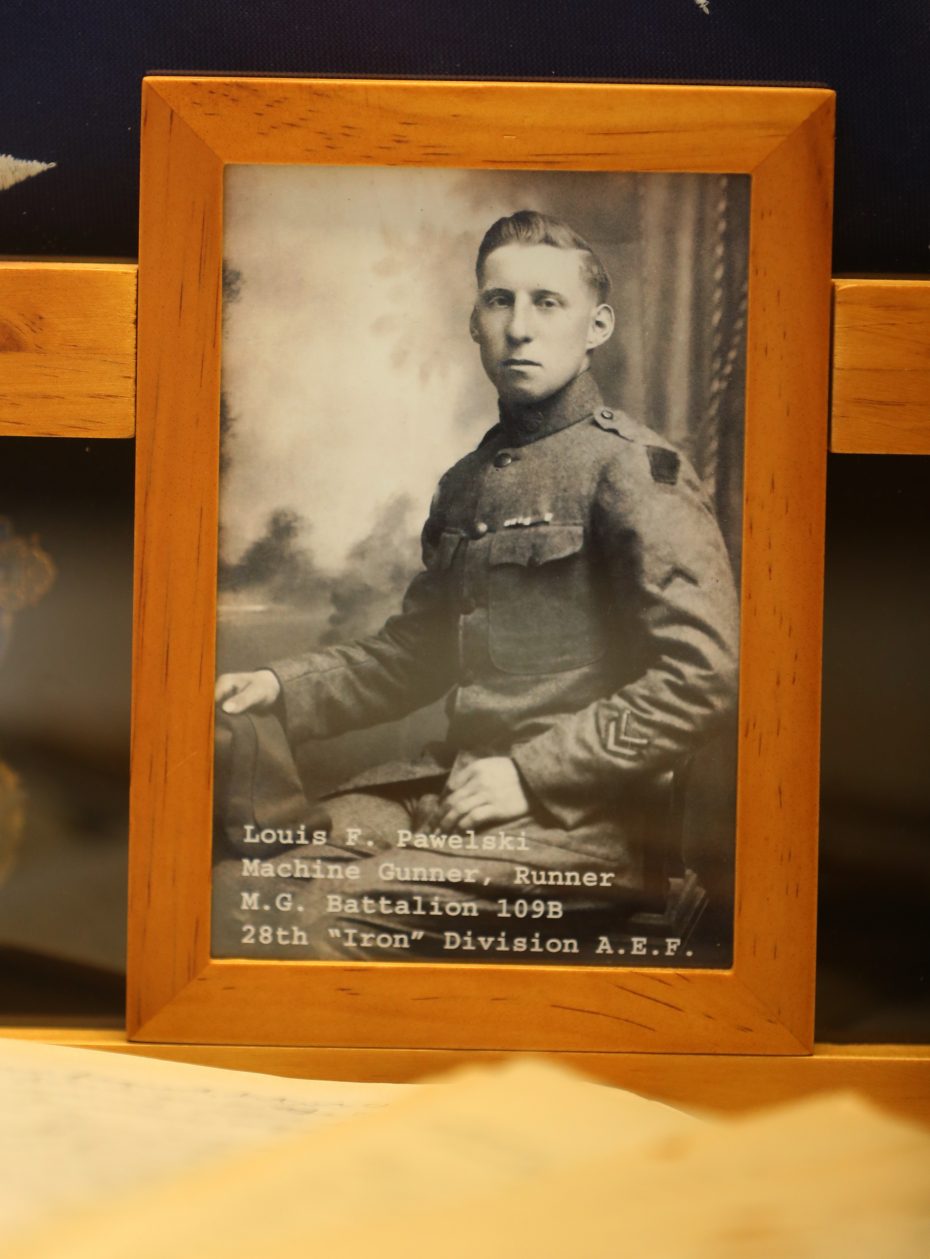 Louis Pawelski suddenly became more than just a name rarely mentioned by his son, Robert L. Pawelski, who died in 1998 without ever telling his family about the war journal.

"My father had gone out to work when he was thirteen years old in the Depression because his father had become disabled from an industrial accident while working in a factory," Bob Pawelski said in speculating on why his dad might not have wanted to revisit the past.

Three years after the discovery, the grandson, his wife, Diane, and their daughter Emily have turned the 310-page journal into a 93-page online document that puts readers on the front lines of a war that had  been described as "the war to end all wars."

Thousands of Western New York residents fought in WWI, which claimed the lives of 116,516 American soldiers, known as "doughboys," including 988 from this region. But the world was not done with war. After 23 years of peace for the United States, the Japanese bombed Pearl Harbor on Dec. 7, 1941, and America entered World War II.

The Pawelskis say they believe Louis, who was 22 while in France, added to some passages after he returned home. They base that on broader references that he wrote about, but could not have known of while in the trenches.

No matter when they were written, Bob Pawelski says his grandfather's accounts of serving as a runner and machine gunner in the 28th “Iron” Division represent a personal history of war from a Buffalo-born-and-raised soldier.

In one entry, Pawelski writes of how he and other troops labored for breath for hours after the Germans had shelled them with canisters of deadly mustard gas. He said they felt as though heavy weights had been pressed against their chests, with waves of nausea making it only worse.

“Tried to kill it with a drink of water but it did not help,” he wrote. “By and by the heavy breathing was getting more lighter and easier and by morning, the vomiting sensation disappeared, but headaches were felt by almost everyone ...”

In another entry, Pawelski sheds light on the high mortality rate he and other runners faced when they delivered messages.

“Pvt. Teator was made a runner which he dreaded. He kind of knew this will finish him up. I tried to encourage him saying all runners don’t get killed, but he argued that nine out of ten are. He was right, he was killed later on. It was a great shock to me as he was a good friend of mine and I sure did missed him.”

Even during the war, Pawelski took time to practice his Catholic faith.

“...in the morning I went to church which was nearby and an American priest asked us who can serve mass, there was about 10 of us. I decided to go. The priest said we don’t have to reply, but assist only. So Sgt. Gauss who was in charge of the platoon in the counter attack joined me and we both served as altar boys. He was about 6 ft. tall weighing about 170 lbs. about 30 years at that time and me alongside of him, I must have looked as a dwarf.”

In one close brush with death, Pawelski wrote of efforts to replace a broken gun. But to do so, it had to be carried across open areas to a supply depot and exchanged. Without cover, he explained, an enemy observer scouring the horizon from the basket of an aerial balloon could easily spot vulnerable targets.

“I took a fellow by the name of Isadore Gorin to help me take the impaired gun to the rear and bring a good one back. To carry the gun over hills, woods, tangled up wires, valleys and up and down a hill by one fellow was too much ..."

When they heard a shell overhead, he said they hit the ground, believing they had been spotted. It burst 25 feet away from them. As Pawelski stood up, he wrote that Gorin refused to move, thinking himself safe in a ditch, not realizing that more shells would likely follow.

“As a runner, I realized the danger to remain in the valley of which he knew nothing. I coaxed him, pleaded, and hollered at him to come along or he’ll be sorry, but I couldn’t make him go until I razzed him from so and so, bluff and bull’em with a .45 [handgun] he decided to go.”

And while the enemy was a constant threat, Pawelski also found time to complain about the chow.

"…coffee, piece of bread and a little jam, it was our breakfast, dinner, and supper. It was raining now too, no wood, no matches, had a couple of candles, cooked coffee by it, eat raw meat, that was about all a fellow could do.”

When at last the Armistice was signed, ending the war at precisely 11 a.m. Nov. 11th, 1918, Pawelski wrote that the day began with “a terrible barrage” inflicted by the enemy.

“Our artillery was paying back with compliment just as heavy and terrible. We were told to stand fast, not give in nor advance but hold our position. The artillery kept up on both sides. As usual, some of the shells fell close by. What’s going to be, no one knew.

“Orders reached us about 10 a.m. that sharp at 11 a.m. we should cease firing and that war ends at 11 a.m. Why it sounded like a joke as the artilleries of both sides were going on full blast. 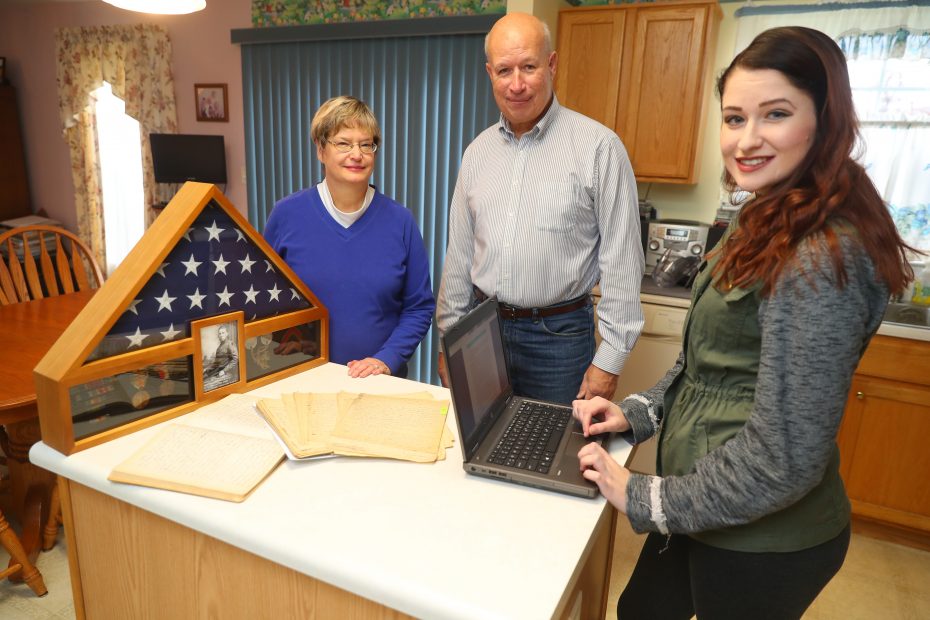 Bob Pawelski recently found a war journal written by his grandfather Louis Pawelski during World War I. He and his wife, Diane, on left, and their daughter Emily look over a copy of the journal in their home in Lake View on Tuesday, Nov. 20, 2018. Emily transcribed her great grandfather's writings so it could be turned into a 93-page digital journal. (John Hickey/Buffalo News)

As 11 a.m. approached, the minutes passed ever so slowly, he wrote.

“We was all up on our pins by the guns eagerly watching the front of us for whatever its going to come. Three more minutes, gosh, the minutes were now going slow. It seemed as the watch stopped, but the owner of the wrist watch put it by his ear, yes, the watch is going (running). Two more minutes, we were sweating already.

“Finally, one more minute. That one minute seemed like an hour now. Eleven o’clock everybody speechless and quiet. Airplanes overhead and artillery going on as usual and heavier. Nothing seen ahead, great disappointment, a moment or two pass. Suddenly, as great as the artillery barrage kept on going, it suddenly stopped.”

But there was apprehension.

“We kept low in our position but not far ahead of us a German head comes up, some nervy guy. Gosh, to shoot or not to shoot, which? But orders are orders. Another head bobs up, then some more. Plenty of heads over there. Suddenly one fellow takes a chance crawling out. Other fellows his friends help him.”

“Oh, what a joy, what a shouting, hand shaking between ourselves, congratulating ourselves to be lucky, whole and safe at the end. Some of the boys were overjoyed. They staged what I would call an Armistice Dance between themselves.”

On May 6, 1919, Pawelski at last arrived in Buffalo. He married the former Elizabeth Halter who had waved goodbye to him when he left for the war. They raised their son Robert and daughter Rita on Emslie Street.

In 1958, he died at 62 years old from a lung ailment that was believed to have been caused in part from exposure to the mustard gas.

In one of his final journal entries, Pawelski told of keeping his word to God after he had stepped into his parents' house on Woltz Avenue when he returned from the war:

“Arriving home, I met my folks and friends in best of health and cheerful and happy. My first move and request was after greeting all to say a prayer for my safe return home, as I promised when I was in France."

After everyone had knelt and prayed, he wrote, "a few minutes later, I was relating my Army experiences with all.”