The man accused of placing three fake pipe bombs outside a police station and a post office in South Buffalo last month may soon get another chance at rehabilitation.

James J. Timpanaro has a long history of mental health and substance abuse issues, according to his attorney, but since his arrest has been turned down for inpatient treatment in a Department of Veterans Affairs-sanctioned program.

Timpanaro, a partially disabled Army veteran, was not accepted into a VA program because of “unsuccessful past treatment,” said Fonda Dawn Kubiak, his federal public defender.

“We’re trying to secure the appropriate treatment for him,” Kubiak said after her client’s appearance in federal court last week. She said her goal is to get the 54-year-old into a long-term treatment program.

Timpanaro, of Richfield Avenue, has been accused of placing two fake bombs outside the Buffalo Police Department's South District station on South Park Avenue in the early morning hours of Oct. 26. He has also been accused of placing a fake bomb the next day outside a South Park Avenue post office. He was arrested and charged Nov. 2 with one count of conveying a hoax.

He appeared in federal court Wednesday morning as his attorney and federal probation officials continue to seek a spot for him in a treatment program. He has pleaded not guilty and remains in custody of the U.S. Marshals Service. He is being housed in the Niagara County Jail. Federal prosecutors have not opposed the defense’s attempts to get Timpanaro into treatment.

Some of his neighbors in South Buffalo said they knew Timpanaro regularly drank alcohol.

Michael Tornabene, who lives several houses away from Timpanaro, described his neighbor as “a partier,” but said he didn’t think he was the type of person who would harm anyone by planting a bomb.

He said Timpanaro has helped him and other homeowners on the street with renovation projects in the past.

One of Timpanaro's daughters declined to speak with a reporter when contacted by The Buffalo News.

Federal officials said they took the South Buffalo case especially seriously in the wake of accusations against a Florida man accused of mailing 16 pipe bombs to critics of President Trump around the country. Cesar A. Sayoc Jr., 56, who was arrested Oct. 26, faces a 30-count indictment and the potential of life in prison if convicted.

Timpanaro’s arrest earlier this month was not his first run-in with the law. 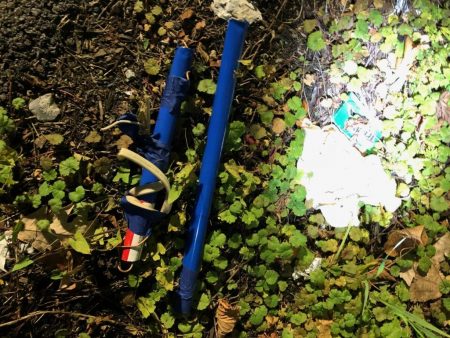 A police photo of two devices that appeared to be pipe bombs that were found Friday, Oct. 26, 2018, outside the South District police station. (Photo courtesy of Buffalo Police Department)

Timpanaro was charged with aggravated driving while intoxicated on July 3, 2008, after being arrested on the southbound I-190 in Buffalo, according to the State Police. He was pulled over for failing to stay in a driving lane and failed field sobriety tests at the scene. He registered a blood-alcohol level of 0.26 percent, more than three times the legal limit, police said.

On March 19, 2017, Timpanaro was charged with second-degree aggravated harassment, a misdemeanor. He was accused of mailing threatening material to another person, according to the criminal complaint filed earlier this month bringing the federal charge. He pleaded guilty and was sentenced to six months in jail, according to the document.

The Erie County Probation Department filed two civil judgments against Timpanaro earlier this year. Timpanaro owed $1,205 in unpaid fees and $500 from an unpaid, court-ordered fine, according to county officials. Timpanaro had his probation revoked in February and was sentenced to nine months in jail. He served some time in the Erie County Correctional Facility in Alden and his release date was not available, authorities said.

Timpanaro has also been politically outspoken.

According to court documents, a neighbor told the FBI Timpanaro once put up a sign in his yard that read, “I was gang raped by Cuomo,” an apparent reference to Gov. Andrew M. Cuomo.

Timpanaro also has written letters to the editor at The Buffalo News. In a letter published Dec. 31, 1989, Timpanaro argued against the drug war, saying the issue should be treated like a health problem, not a crime problem. In a November 2017 letter, he argued against a state constitutional convention.