His presence helped take some of the weight off the Bonnies, as well.

Stockard scored a game-high 19 points in his season debut, helping St. Bonaventure snap a four-game losing streak with a 70-55 victory against Canisius, its oldest rival, on Wednesday night at the Reilly Center. Canisius (1-6) has lost six consecutive games and has a week off to catch its breath. St. Bonaventure (2-5) plays its next three at home.

“I expected to be a little rusty coming back,” Stockard said, “but having a game like this, being able to will our team to a win, it’s pretty big for us, especially with us losing four in a row.”

Stockard came off the bench with Canisius leading 11-9 with 11:34 remaining in the first half. He made his presence felt as the Bonnies pulled away, finishing the half with nine points and four rebounds.

Stockard ended up with 19 points on 5 of 7 shooting from the field and 1 of 3 from 3-point range. He was a perfect 8 of 8 from the free throw line. He also had seven rebounds, three assists and a steal in just over 20 minutes of playing time.

“Courtney hadn’t played in six months, and he had been practicing the last couple of weeks, but we can’t play him too many minutes, so we had a plan going in,” St. Bonaventure coach Mark Schmidt said. “It’s comforting from a coaching standpoint to have a guy out that’s been there before, that’s done it, that the other guys can lean on. Because with the young guys that we have, they haven’t been in those situations. Everything’s new to them. But with having Courtney out there, he’s been in those situations, it gives those guys courage, and that’s what we need.” 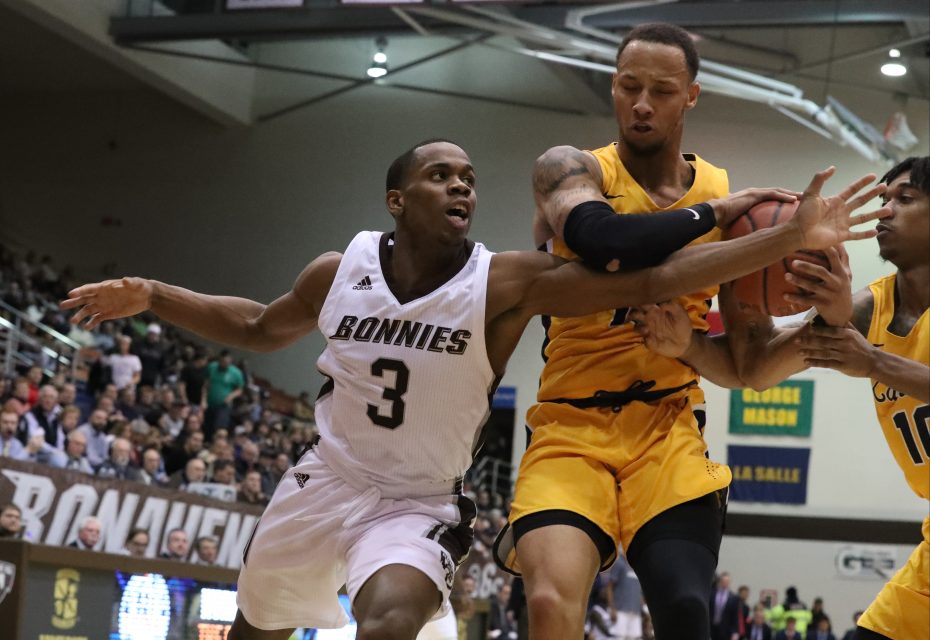 “We didn’t get down on ourselves, we stayed positive, stayed together, didn’t point fingers at anybody and kind of stayed focused as a team,” Osunniyi said. “So today, we knew that we had to come together and play harder than Canisius, and at points in time we didn’t play as hard as we wanted to. It wasn’t a perfect game, but we did what we had to do to get a win today.”

Isaiah Reese, who scored 31 points in a loss to St. Bonaventure last year but has been battling an illness, finished with just three points on 1 of 10 shooting, six rebounds, seven assists and three steals.

Canisius took a 17-14 lead on a 3 by Sanks with 8:48 to play in the first half, but hit just one field goal over the next eight minutes as the Bonnies took control with a 23-3 run, turning a three-point deficit into a 37-20 advantage.

Canisius hit just 1 of 8 shots from the field over that stretch, with the only offensive rebound, by Reese off his own missed layup, leading to a lone bucket by Scott Hitchon.

Sanks hit a 3 to send the teams into intermission with the Bonnies on top, 37-23.

The Bonnies outrebounded the Griffs 42-32, but dominated on the defensive boards, where they bested the visitors 34-8. The Bonnies bench outscored the Griffs' 43-28.

Canisius coach Reggie Witherspoon had a nagging feeling heading into his 500th career game as a Division I head coach.

“We kept saying, ‘He’ll play, he’ll play. He’ll heal up just in time to play against us,'" Witherspoon said.

And he was right.

Canisius entered the contest on a five-game skid and ranked among the worst rebounding teams in the nation — the Griffs’ total rebounding percentage of 41.5 ranked 346th out of 353 NCAA Division I men's basketball teams.

But the Griffs had faced some heavyweight competition. They rebounded an NCAA-worst 36.5 percent in their last three games against UAB, Memphis and reigning national champion Villanova at the AdvoCare Invitational in Lake Buena Vista, Fla. And that’s not counting the prior game, a 32-point loss to nationally-ranked Florida State.

Canisius was looking forward to returning from the deep end of the pool and into more familiar waters against St. Bonaventure, which had traditionally dominated the Griffs in the Reilly Center but lost its last meeting in this venue in overtime in 2016.

The Griffs have played five games in 10 days in three different cities.

"First of all, give them credit, because they shared the ball and they played the right way," Witherspoon said. "On our end, we’re just not playing well and we’re dead tired. When Malik Johnson asked me for a sub twice I said, ‘uh oh.’ He’s got as much stamina as anybody I’ve been around. So with the travel and the games I think we need a break. Probably longer than the one we’re getting and we don’t play for a week. But we need a break."