A 93-acre stretch of the Bethlehem Steel complex in Lackawanna that runs along Route 5 could soon come under the control of Erie County officials.

A deal is being negotiated for an affiliate of the Erie County Industrial Development Agency to buy the property on the west side of Route 5 from its current owner, Tecumseh Redevelopment.

The deal, if it is completed, would expand the portion of the former Bethlehem Steel site under county control by about 60 percent by adding a stretch of property running along Route 5 from Dona Street in Lackawanna to the rail bridge across Route 5 at the Hamburg-Lackawanna border.

The IDA on Wednesday gave its approval to use up to $1.75 million in grant funding it controls to help pay for the purchase of the land, which is adjacent to 150 acres that the county gained control of through a separate purchase last year. Most of the funding would come through a $1.5 million state grant that was approved in July by Empire State Development.

"It's prime land for redevelopment," said County Executive Mark Poloncarz, who has spearheaded efforts to revitalize the sprawling steel complex that has been largely vacant since Bethlehem Steel shut down 35 years ago. 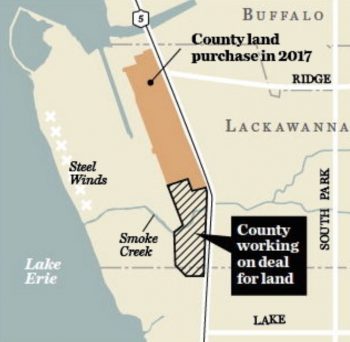 The property that would be acquired runs directly along Route 5, making it both highly visible to passing traffic and giving the county control of what would be an uninterrupted stretch of land from just north of Ridge Road to the Hamburg-Lackawanna border.

"This extension will allow us to build on what we've already done," Poloncarz said.

That includes a further extension of the bike path that opened last month and now stretches to Dona Street. Work now is underway to extend Dona Street into the steel plant complex, and a rail line within the property has been relocated further to the interior to free up more land for development along Route 5.

In all, the county would control about 240 acres within the former steel plant complex, giving it a supply of land that is ready to be developed. The site also could be divided into larger chunks, spanning perhaps 40 acres to 50 acres if a business was seeking such a large site, at a time when shovel-ready parcels are in relatively short supply locally.

"It's a critical issue for the community right now," said Dottie Gallagher, president of the Buffalo Niagara Partnership.

IDA officials said they still are negotiating the purchase agreement, although the rough financial terms have been reached, including a purchase price of around $16,000 an acre, similar to the price paid for the initial 148-acre parcel.

"I would say it's in draft form. We've been going back and forth," said John Cappellino, the IDA's executive vice president.

Poloncarz said the property running along Route 5 generally has less environmental contamination than some of the land further to the interior of the complex.

"The advantage of having the frontage is that it's where the businesses want to be," he said.

Poloncarz and other local leaders are betting that the county’s $5.5 million land-purchase agreement with Tecumseh Redevelopment for the original 148 acres of remediated brownfield and the potential deal for another 93 acres will create a coveted site for manufacturing and other business. That's because the property has easy access to transportation by water, railroad and highway. The highly visible land also is close to Canada and qualifies for lucrative brownfield tax credits.

Poloncarz believes the redevelopment of the Bethlehem site eventually could be viewed as a watershed event in the revival of the Buffalo Niagara economy.

"It's been a long process to get to this point," he said.