Matt Scheff and Mike Destefano have spent their share of Sunday afternoons at The Place. The two roommates, both from Williamsville, describe themselves as regulars. They down Blue Light and Tullamore Dew during games.

But they’ve never tried — lo, never even Googled! — the restaurant’s most iconic drink, which draws besotted pilgrims from all corners during the holiday season.

“The Tom & Jerry? I know that’s the special,” a bemused Destefano said. “But no, we’ve never had that. What’s in it?”

What’s in the famous Tom & Jerry? Depends whom you ask. “Winter dreams,” says a woman further down the bar. Also: rum, brandy, hot water and a thick, frothy meringue — like a magical hot toddy/eggnog love child.

For reasons this author cannot fathom, the boozy, 200-year-old concoction is consumed few places outside Wisconsin, Minnesota and Western New York. And in Western New York, the capital of the Tom & Jerry is arguably Lexington Avenue’s The Place, which has, during winter seasons, ladled them out by the warm, gloopy dipper since 1941.

Still, it’s possible to go a whole lifetime here without ever having a mug. One doesn’t simply stumble upon the Tom & Jerry at a house party or a tailgate -- you must be inducted into this club.

Personally, my induction came courtesy my parents, who spirited me off to The Place during a Christmas visit several years ago. We all insisted on buying each other a round — three total — so my mom and I sang carols the whole ride home.

Cheers to the holidays: The News' Tom & Jerry Finder

This became a beloved annual tradition. When The Place closed for renovations in 2015, my family was distraught. We searched in vain for suitable substitutes — did you know at some places it is only a Scrooge-y 6 ounces?! — before my mother resolved to make her own. 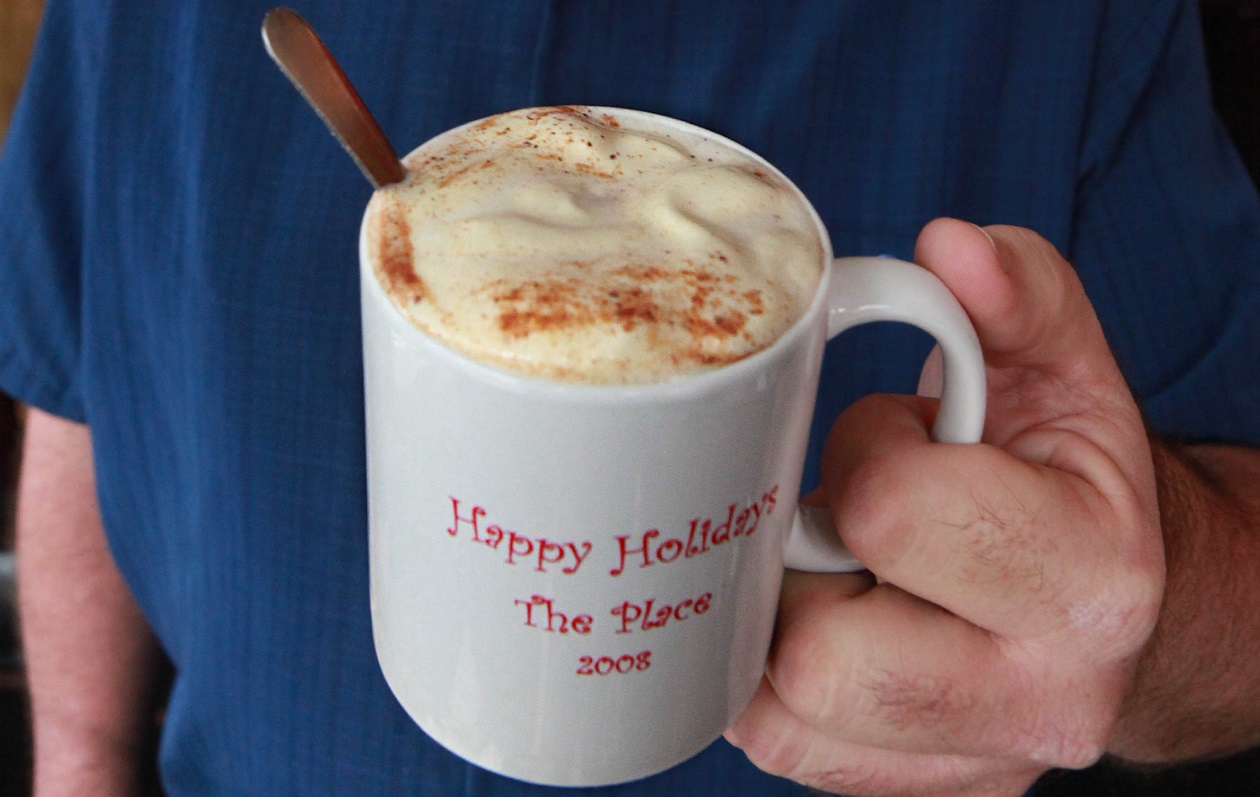 An image of a Tom & Jerry at The Place from 10 years ago. (Sharon Cantillon/News file photo)

The next year, with The Place back in business, we introduced my then-fiance to the glories of the drink. Now a veteran, he’s eager to evangelize skeptics like Scheff and Destefano, who are now checking their fantasy football scores at the bar beside me.

The duo fiddle with the brims of their backward baseball caps and watch our bartender scoop heavy beige meringue with expressions somewhere between amusement and disgust.

“I thought it was gravy,” said the 25-year-old Scheff.

The bartender streams rum and brandy into their mugs and dilutes them with hot water. These Tom & Jerrys come garnished with nutmeg and coffee stirrers, the better to integrate those layers of foam and liquor. 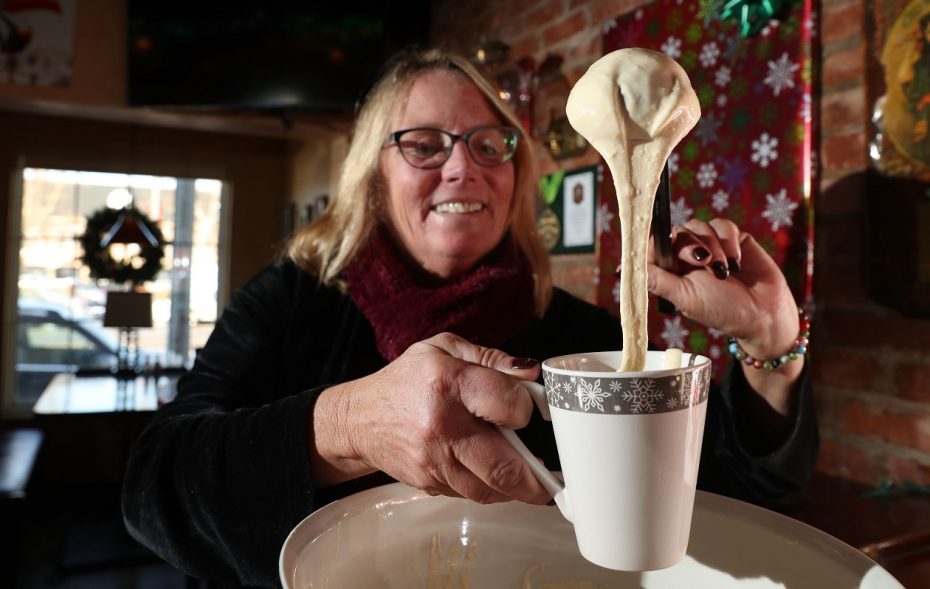 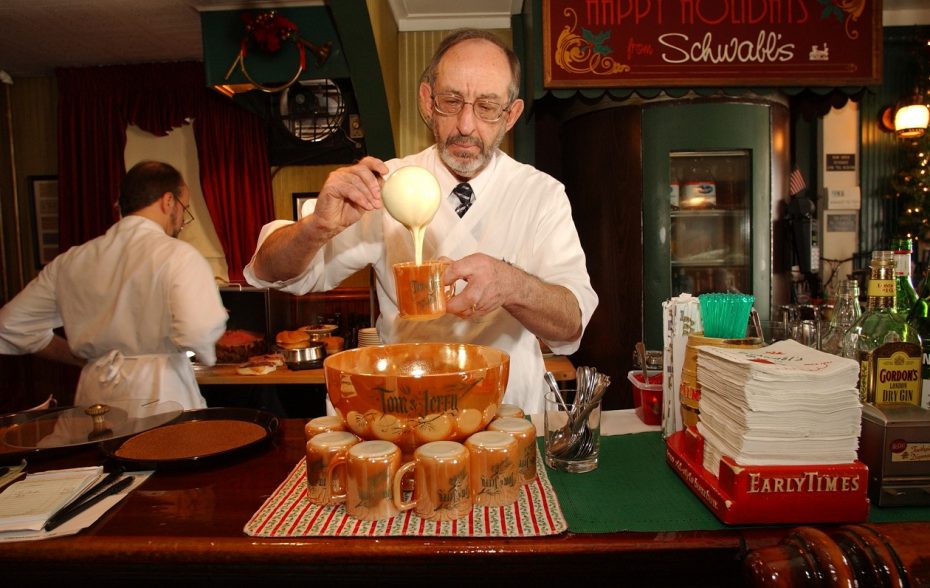 “Cheers,” the two young men say as they take their first gulp. Then: “It’s thick! Are you supposed to drink it through the straw?” Very sweet, they declare. Lots of nutmeg. Eggnog-esque. At last: “This is pretty good,” and “Whoa, these are pretty strong.”

Alas, when next we check in with our Tom & Jerry virgins, they have ordered further rounds of Blue and abandoned the lukewarm dregs at the bottom of their branded mugs. They liked the drink, they say, but not quite enough to order another round. (Meanwhile, my husband and I are calculating the gym time we’d need to log to afford a third before cabbing back to our apartment.)

There is hope in Tom & Jerry land, however. All this commotion has attracted the attention of a young woman drinking Cabernet. She wrinkles her nose and squints into someone else’s drink.

“What’s even in a Tom & Jerry?” she asks Scheff and Destefano.

“Rum and brandy,” they volunteer. “You should try one!”

A toast to tradition: Tom and Jerrys and hot buttered rum take the chill out of long winter days