All of this and other limitations stand out at New Era Field in Orchard Park and at KeyBank Center in downtown Buffalo amid a constant race by other sports teams across the nation to offer more to their fans.

These are among the factors that drove Pegula Sports & Entertainment to hire a consultant to look into stadium options for both the Buffalo Bills and the Buffalo Sabres, as lease deadlines approach.

Consultant CAA ICON will study the potential for either renovating the Bills' New Era Field or building a new football stadium, which could be located in the city. The Denver-based consultant also will look into possible renovations at KeyBank Center, where the Sabres hockey team and the Buffalo Bandits lacrosse team now play.

Everything is on the table.

“We’ve got two venues that are in need of renovation and we needed to bring in some outside expertise to begin the evaluation,” Bruce Popko, Pegula Sports & Entertainment's chief operating officer, said at a press conference on Tuesday. “We have expiring leases and we have, candidly, venues that need upgrading.”

Popko said the expiring leases add pressure to the information-gathering effort needed to make big decisions in the near future. The Bills stadium lease agreement expires in 2023. The lease for KeyBank Center expires in 2025.

"We have some more time, but we are up against it," Popko said. "We are now to the phase where we have to begin to make some determinations because five years goes really in the blink of an eye."

"We know we’ve got to improve the fan experience," Popko said.

As far as potential sites for any new stadium, including the possibility of combining a Bills stadium with a new convention center, Popko said nothing is off the table. But part of the study includes evaluating the public appetite for significant spending and funding.

"We don’t go into it with any preconceived notions," Popko said. "I can tell you quite honestly, we were asked by them – by CAA ICON – to really have as open a mind as we can, and we're going into this exercise like that."

The study, which will be paid for entirely by Pegula Sports & Entertainment, will be a first step toward determining the long-term homes for Buffalo's professional football and hockey teams. New Era Field is more than 40 years old, while KeyBank Center has been open for 23 years. Erie County Executive Mark Poloncarz said Popko told him Tuesday that the findings will not be publicly shared.

The study will examine the feasibility of further renovations at New Era Field and will also weigh the options for building a new football stadium, including potential stadium sites, design and financing options. It also will look at modernizing KeyBank Center to meet the demands of today's fans, Popko said.

"The fan is now demanding different things than they were 15-20 years ago and we have to recognize that," Popko said. "There are lots of things that we don’t enjoy right now and we’re going to need to move forward.”

Feedback from fans will be central to the study, which will solicit public input through broad surveys, focus groups and even one-on-one conversations at games. The goal is to determine "what preferences are out there, what we can afford, and really what the marketplace wants," Popko said.

He noted tailgating remains an "absolutely essential" part of the game day experience.

The consultant is not being asked to recommend whether the Bills stadium should remain in Orchard Park or move to a different location, he said. Instead, it's being asked to provide information on all worthwhile options that all the major stakeholders will review before choosing a direction.

"It’ll identify the ability to stay where we are, or it’s going to take a look at some options to do something different if we can," he said. "This is the germination phase. We haven’t identified any specific sites yet. We’re going to be going through all that research in the coming months."

The study, the cost of which was not disclosed, will take six to nine months to finish. While it will focus on both New Era Field and KeyBank Center, more resources will be dedicated to the Bills stadium because of that venue's shorter lease deadline. But Popko said the team is not facing pressure from the NFL or other owners, although it has received feedback from them about projects elsewhere in the country.

At KeyBank Center, the Pegulas have already invested about $26 million of their money on “small pieces” of the building over the last five years, but there’s been no large-scale renovation since it opened.

“This place has got a lot of things related to the base infrastructure that need some help,” Popko said. “There’s a laundry list of things that we could go through. We’re ready for the next phase of development.”

He cited the quality of the seats and technology in the building, as well as the need for new digital screens. Additionally, he said, “from where I stand, certainly, we’ve witnessed that some of the audio in the building is not up to snuff.”

Also, Popko said modern arenas have enclosed spaces where the teams can offer specialized programming to “enhance the fan experience,” but “I think that’s something that we are lacking.”

And while the plaza area is a great feature, “we are in a cold-weather market, and sometimes that doesn’t serve our purposes as much as it should.” 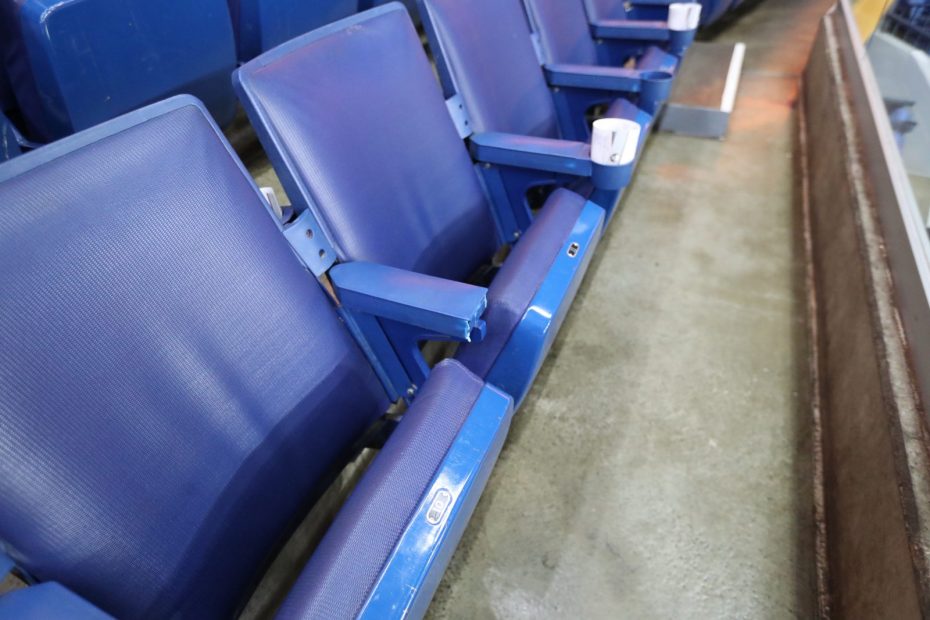 A broken cup holder is seen on a seat in the 100 level at KeyBank Center. (James P. McCoy/Buffalo News)

New Era Field already received more than $130 million in renovations several years ago, funded jointly by the Pegulas and Erie County. Additionally, the Bills previously announced the investment of $18 million in stadium renovations for improved club seating and digital ribbon board signage this year, and another $18 million earmarked to upgrade the ADPRO training facility at the stadium complex by April.

But Popko said additional improvements are needed to address the same issues of technology, programming and concessions as with KeyBank Center. He also cited the "seating bowl" and the appearance of the premium areas, and noted that "just about every modern arena now" has at least two LED display boards to offer information to fans and engage them more actively.

The costs of any renovations have yet to be determined.

The last time a major study was released regarding stadium options was in early 2015, when a state-commissioned study highlighted three new sites for a Bills stadium near downtown Buffalo, as well as renovating on constructing a next-door replacement of the current stadium in Orchard Park.

[RELATED: Here's what a 2014 state report had to say about stadium sites]

CAA ICON previously worked with Kim and Terry Pegula on the HarborCenter hotel and ice rink project next to KeyBank Center, and also made recommendations on the upgrades to Penn State’s Pegula Ice Arena.

The consultant is also partnering with Populous for architecture and planning services. Populous has previously served as a design consultant for Yankee Stadium, the London Olympics and the Super Bowl.

The design firm was also heavily involved in the last renovation to the Bills stadium, helping the Pegulas redesign premium and enclosed club spaces. In this case, though, the architectural firm will not develop any detailed renderings but may offer broad "blue sky" concepts, Popko said.

In regard to public money being earmarked into a New Stadium Fund, Popko confirmed that the Pegulas and county and state leaders have agreed to set aside money that could be spent on an outside consultant for a future stadium study that would be commissioned by all three parties. Poloncarz previously said that $500,000 was set aside this year and the same amount will be set aside next year.

"Nothing announced today should indicate any particular action, such as building a new stadium or hockey arena, will in fact occur," Poloncarz said. "Any final decision will ultimately be made by the Pegulas through PSE, the county and New York State after future negotiations."

Popko cautioned that Bills stadium considerations are in the early stages and that New Era Field will be in use for some time to come. It's possible the Bills will remain at their current stadium for some time after the lease expires in 2023, he said.

"We’re talking years and years," he said of the potential completion of a new stadium, "and we’re also going to be relying on the public-private partnership that we’ve always had to even see if it’s even feasible, even if the study comes back and tells us that a new building may be a necessity."