Cameron Perkins peered longingly through the glass of the vending machine, his eyes scanning the rows as he considered the enticing options in front of him.

But it wasn’t candy or chips or soft drinks that held his gaze. This vending machine was filled with new books – hundreds of them.

The book vending machine is the latest literacy tool at Arthur O. Eve School 61, where it sits nestled in the corner of the school library, luring kids like a beacon of light.

Each month, students at the prekindergarten through grade four school on Leroy Avenue will earn a trip to the library and a golden token to drop into the vending machine for a book of their choosing. They can keep it, take it home and read it again and again,

There was a Clifford board book at E-6.

For a young readers’ edition of “Hidden Figures,” press A-0.

Or how about that paperback from the popular Geronimo Stilton series?

“Very cool,” said Cameron, a third-grader at the school. “Now, I get to get books for free. I’m very excited.”

The book vending machine is the brainchild of Unseld Robinson, assistant principal at the school, who had heard about a similar one in Washington, D.C., and wondered if School 61 could improve on the idea.

“Many children in Buffalo are not reading as much as they should,” Robinson said, “so the thought was to have them look to the vending machine for inspiration.”

Sure, the school could just let the kids pick a book out of a stack. But the vending machine adds to the novelty, Robinson said, builds that excitement: 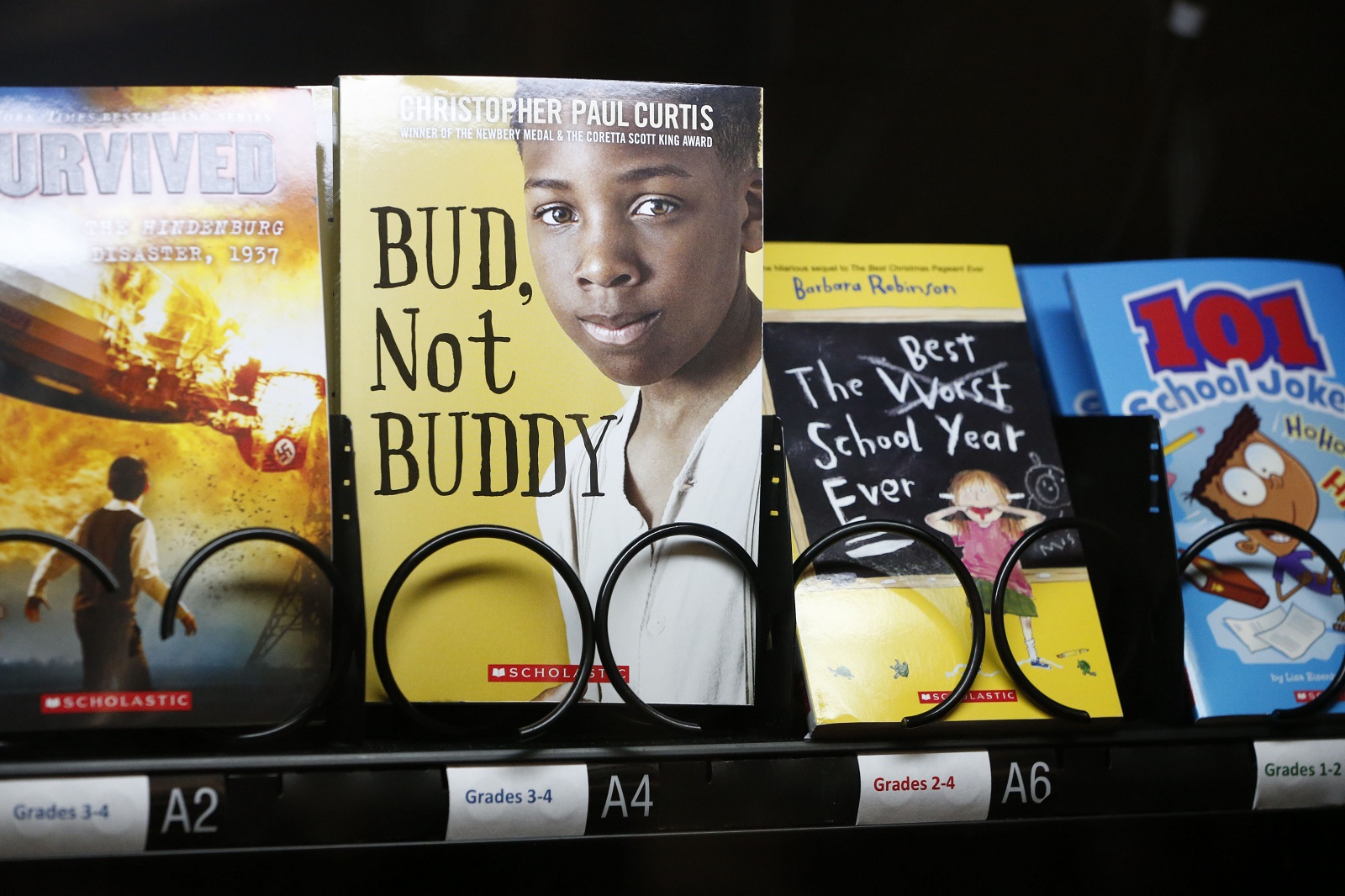 A selection of books inside a different kind of vending machine. (Derek Gee/Buffalo News)

The feel of the token in your hand.

Choosing from so many options.

That anticipation of watching the book drop.

“We wanted to make literacy exciting and fun,” said Principal Parette Walker, “because learning and reading should be fun.”

Robinson reached out to Global Vending Group in Amherst to see if the company could customize one of its vending machines for books. He worked with Scholastic to find just the right sizes and titles. This was new for both companies.

Meanwhile, the Community Action Organization came up with the $3,000 cost. And the Teacher’s Desk, a not-for-profit school supply store on Northampton Street, agreed to keep the machine stocked.

The planning took Robinson about a year and a half, but the book vending machine finally came to fruition on Tuesday, when the school had its big unveiling.

Catherine Collins, a member of the state Board of Regents, said maybe these book vending machines should be in schools throughout the state. 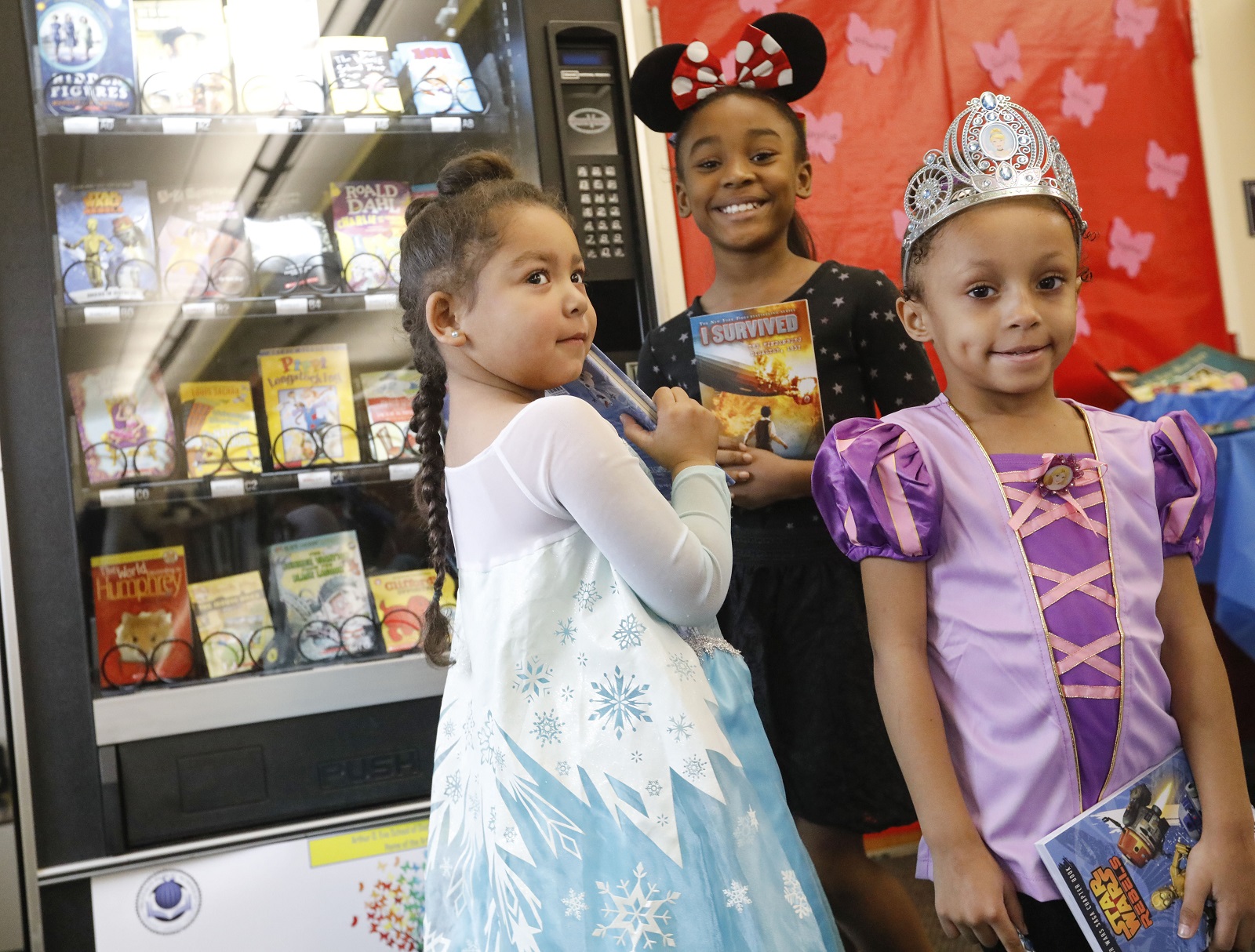 Having been the first students to use the new book vending machine in the library at the Arthur O. Eve School School of Distinction, from left, first grader Navaeh Johnson, third grader Marshai Alston and pre-K student Joel Morales got to dress as their favorite storybook characters. (Derek Gee/Buffalo News)

“One of the biggest issues we have in this district is literacy,” said Sharon Belton-Cottman, the Ferry District representative on the Buffalo Board of Education. “If our children can read, they can survive.”

As for Cameron, he didn’t get a book on Tuesday – but he knows which one he'll choose.

But he had one question about the school’s new vending machine.

“When we run out of books, will we replace them with the same books or new books?” Cameron asked a reporter. “Because if we fill them with different books, it will take us even further.”

By the way, Cameron said, he likes adventure stories and “Goosebumps” books.