Heading into the 2018-19 season, the Atlantic Division felt the most predictable. By a considerable margin.

Three teams – including the Tampa Bay Lightning, Toronto Maple Leafs, and Boston Bruins – felt like playoff locks and possible Stanley Cup contenders. Three other teams – including the Detroit Red Wings, Montreal Canadiens, and Ottawa Senators – felt like playoff lottery guarantees. In a division with such clear stratification between contenders and pretenders, our attention understandably turned to other, more compelling playoff races.

And then the Buffalo Sabres happened.

Buffalo has upset the apple cart in a way that few could have imagined. They have rattled off nine consecutive wins and 10 of the last 11 and now have the third-best points pace in the entire league, trailing just Tampa Bay and Nashville. Regardless of how strongly you rate the Sabres, they have banked a substantial number of points in the first third of the regular season. For that reason and that reason alone, they are a factor in the Eastern Conference.

But Buffalo isn’t the only team that’s changed the landscape in the Atlantic. Montreal banked some unexpected points early, too, thanks in large part to five overtime losses – tied with three other teams the most in the league. Meanwhile, Florida has been surprisingly poor. The Panthers were expected to contend for a wild-card position and instead are sitting one point from last place in the Atlantic.

So how do we reevaluate the Atlantic division? With 30 percent of the regular season complete, we can’t just apply a per-82 game pace — some teams can reasonably outperform or underperform expectations in smaller samples, which can cloud our understanding of performance. But we also cannot assume that our priors are unilaterally correct. Before the season began, most betting markets saw the Sabres as a 75-point team. Is our best guess today that the Sabres are a 75-point team? Surely not.

Here’s what we can do. We can look historically at how well the first 30 percent of the regular season explained the next 70 percent of the regular season (or, the correlation between the two). And then using that regression, we can apply a reasonable forecast for where the Sabres will end up next season. It’s a very simple approach, but one that is mathematically defensible. (As an aside, the correlation between these two variables is 0.52.)

Regressed standings are itemized below:

Not surprisingly, the standings are generally expected to stay relatively stable to what we see today, and that’s largely because the first two months of the regular season are predictive of future outcomes. And to that end, the regression will be very kind to Buffalo. The model sees teams such as Tampa Bay and Buffalo as outliers, mostly because they are – at their current pace, the Lightning and Sabres would be expected to finish with 120 and 116 points, respectively. Those are massive numbers (almost certainly good enough to win a President’s Trophy), and the reality is that even the league’s elite teams have trouble sustaining that type of success for an 82-game season.

More than anything, it speaks to the importance of the points already banked by Buffalo. If the Sabres played to just a point-per-game pace for the rest of the season (which is really a draft lottery type of pace), they would finish with 90 points – just more than the playoff cutline in the division.

But what this exercise doesn’t do is answer the legitimacy of Buffalo’s performance. We need to look at the underlying numbers to better understand how sustainable Buffalo’s winning ways are. Season to date, that tells a little bit of a different story – a story that suggests the Sabres are much improved from years past, but probably not playing to the performance that their point accumulation would suggest: 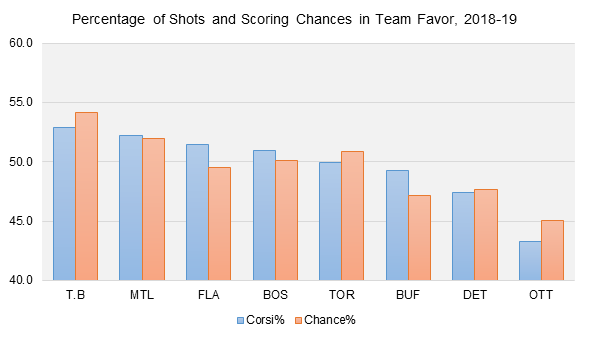 At 5-on-5, the Sabres look tremendously average — which isn’t a bad thing. This was a Sabres team that was notoriously buried in the defensive zone for close to a decade, and getting near 50 percent of the shots and scoring chances is a massive improvement for coach Phil Housley. Add that the Sabres are getting quality goaltending and decent special teams performance, and you have a recipe for success.

Some degree of success, anyway. Though it won’t be a very sexy or popular take, the reality is the Sabres have considerably outperformed expectations in the first third of the season. What Buffalo has in place is certainly enough to reach the postseason and that alone is laudable. But trading shots and scoring chances, generally speaking, is going to correlate with a team finishing somewhere around the playoff cut-line. Not with winning the division.

Buffalo’s saving grace? Again, it comes back to the points already in the bank. That cannot be discounted, and full marks go to the team for beating expectations season-to-date. It should be enough to get them back into the playoffs, though no one should be surprised if and when they hit a rough patch in the coming weeks.