Barbara Maynor loves almost everything about her new home, with one rather large exception: The 7,000 tons of dirt and crushed concrete on land behind the Canterbury Woods development at Gates Circle.

Maynor and her husband were among the first to move into the senior community when it opened on Delaware Avenue more than a year ago.

They say they love their new apartment. What they don't like is the view out the back of their building, where a mound of dirt and debris sits next to the remnants of the former Millard Fillmore Gates Circle Hospital.

Residents say the pile is an eyesore and a hazard. They say the dust is blown around by the wind, landing on patios and disturbing residents. Some have even dubbed it "Mount Montante," after the primary developer who owns the land.

"There is universal dismay about what is going on in our immediate neighborhood, right behind our building," said Thomas Beecher, another resident. "This isn't just a couple of people at Canterbury who are concerned."

The Canterbury residents, as well as others from the neighborhood, have voiced concerns not only to TM Montante Development, but also to city officials and politicians. They want to see the pile removed and the site cleaned up. They also are eager for construction to begin on a promised redevelopment project that has languished.

Montante executives are aware of the neighbors' concerns. They're equally frustrated, they say, by circumstances that are somewhat outside their control.

That's because their partner on the $150 million project – a company controlled by Rochester developer Robert C. Morgan – is embroiled in a federal mortgage fraud investigation that led to the indictment of his son and nephew. That's held everything up, the company says, because lenders will not extend financing for the project while Morgan is involved.

"We hear and understand that the Canterbury residents are frustrated. We’re really frustrated, too. We want nothing more than to be able to move the project forward," said Christian Campos, president of TM Montante.

TM Montante Development officials say they are trying to buy out Morgan and his family from the project, with an agreement expected shortly. Until that's done, Montante can't complete its purchase of a neighboring parking ramp or get financing to start construction.

"Unwinding a deal of this complexity takes time," Campos said.

Thomas Montante and his company acquired the 10-acre former hospital campus from Kaleida Health with grand plans for a multiyear redevelopment. Plans call for up to 500 condominiums, market-rate apartments and townhouses, plus a grocery store, a fitness center, ground-floor retail and office space.

But work has been slower than many – including Montante – had hoped. 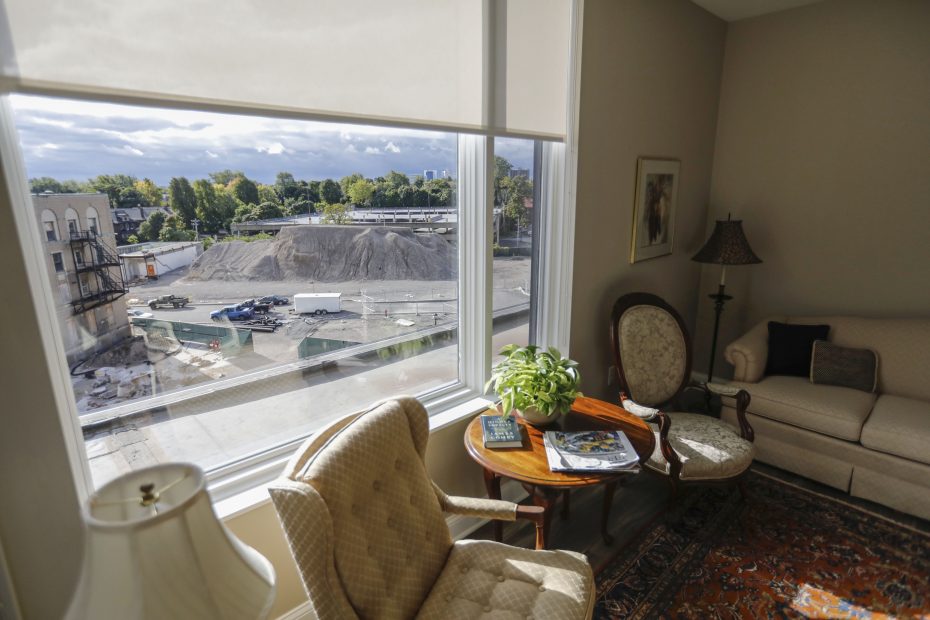 The view from an apartment of  the new Canterbury Woods facility at Gates Circle of the three-story tall pile of rubble on the neighboring site of the former Millard Fillmore Hospital. (Derek Gee/Buffalo News)

The developer completed the demolition of most of the hospital buildings, including the implosion of the main tower. Only the homeopathic facilities, which date to 1911, still remain and will be reused. Montante also removed asbestos and other materials, and finished the environmental remediation of the site in December 2015.

As far as neighbors are concerned, though, that's all that Montante has really done.

"Can a developer acquire a vast swath of land and just sit on it?" Maynor said.

Montante officials say they've accomplished a lot more, although much of the work involves infrastructure, gaining municipal approvals, conducting environmental reviews and obtaining property tax breaks that are key parts of the project.

Montante acquired a 68-year-old medical office building at 1275 Delaware Ave. last December, with plans to renovate it using historic tax credits. That project would entail retail space or commercial offices on the first floor, with about 35 apartments above.

The company also won city approval for its 1299 Delaware Ave. project. At the northeast corner of Lancaster Avenue, the 60,000-square-foot building would include 59 apartments and three storefronts.

That $15 million building would also be almost right up against Canterbury Woods, whose residents object to the idea, and want the city approval revisited.

"We are very disappointed that their first step is going to be to jam a building right up next to ours instead of building on all the sites you see across the Lancaster Avenue Extension," said Canterbury resident Judy Duchan.

Montante also signed an agreement in January to acquire a nearby city-owned parking ramp, which officials say is critical to the project's success. The $1.7 million deal for the three-level ramp, however, is still in limbo until the Morgans are out of the ownership.

TM Montante was counting on the Morgan family as an asset, not a liability.

What TM Montante officials didn't know when they struck a deal with one of Morgan's companies was that the FBI's Buffalo office was investigating it for alleged fraud in obtaining commercial mortgages on some projects, not just locally but also in other states. Agents raided the Morgan offices in suburban Rochester, eventually leading to the indictments of Kevin and Todd Morgan in May, along with two Buffalo-based mortgage brokers.

Charges are still pending, and the U.S. Attorney's Office has said the investigation is continuing.

The Montantes have been working to extricate themselves from the deal with Morgan's company since last spring.

"The Morgans have agreed to fully exit the partnership," Campos said.

Once that's done, he said, TM Montante can finalize the parking ramp purchase and start work on the new building at 1299 Delaware Ave.

"We're capable of moving those elements forward ourselves," Campos said.

Eventually, though, Montante still wants to "bring on one or more project partners" to complete the rest of the job, he added.

The neighbors, meanwhile, say the mound on the construction site has deterred potential new residents from moving into the Canterbury Woods development. Of the 53 independent living units at Canterbury, 32 are rented. Most of those that remain unoccupied are on the side facing the mound.

Canterbury residents are also upset about how the remaining homeopathic buildings look, as well as the construction fences and green plastic around the site.

And they're frustrated that the new roads are not yet completed, particularly at the traffic light at Delaware and Lancaster.

Montante officials are trying to address those objections. Campos said the mound consists of crushed concrete from the demolition, which has been certified as clean and safe.

He said Montante had planned to use the material as backfill for the hole that would be created after tearing down the homeopathic hospital buildings. But after hearing from the community, the developer instead decided to rehab those structures, so the dirt pile wasn't needed. The problem now is what to do with it. Because it's coming from a brownfield area, there are restrictions about where it can be used.

It could be used on the future Gates Circle projects, but that would take a while.

"We're working on getting that off site," Campos said. "We hope it happens soon." 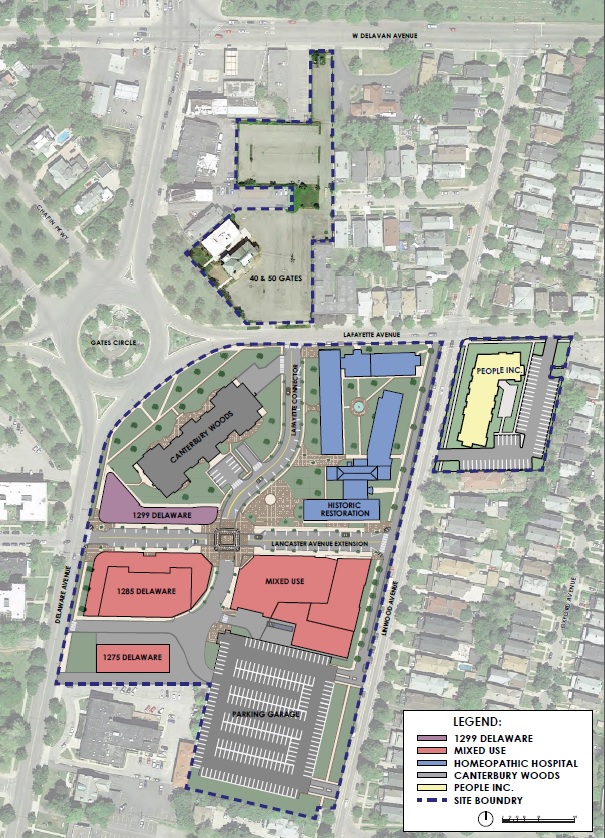 A site map of the planned Lancaster Square at Gates Circle.