Jay Schiller started his mattress retail chain on Broadway in the 1960s and made City Mattress a household name in the Buffalo Niagara market. After more than four decades building its business here, the company moved its headquarters to Bonita Springs, Fla., in 2007.

Today, it has just four stores here, in Clarence, Amherst, Lancaster and Hamburg; while it has 14 locations in Florida and five in the Rochester area.

After creating its own line of high-end mattresses called PranaSleep in 2004, the company added a manufacturing facility in Florida as well.

In September, PranaSleep opened a factory in Depew, close to the company's nine City Mattress stores in the Buffalo and Rochester markets, as well as another major client in the Northeast that it declined to name.

Building closer to its customers is simply more efficient and cuts down on transportation costs, said company spokesman Eric Anderson. Still, the company is committed to growing in Buffalo, he said, and the owners have been wanting to bring some operations back to their hometown.

The Depew factory, which has 37 full-time employees, makes about 50 mattress per day. As workers get more practice and learn to work more quickly, the company fields enough orders that it will be able to make up to 150 mattresses per day when workers are ready.

Some PranaSleep mattresses sell around the $1,000 mark, but other models sell for much more, such as the Organics Super Hatha Supersoft mattress, which retails for more than $10,000. The company counts professional football, hockey, tennis and golf athletes among its customers and has custom-created mattresses for yachts, tour buses and RVs.

"We've had people bring us some crazy designs and we’ve been able to make them," said Ryan Bethea, PranaSleep's director of operations. "We've made humongous mattresses, we've made really, really small mattresses. People have asked us for triangle mattresses, circle mattresses. Whatever a customer needs, we try to make it happen." 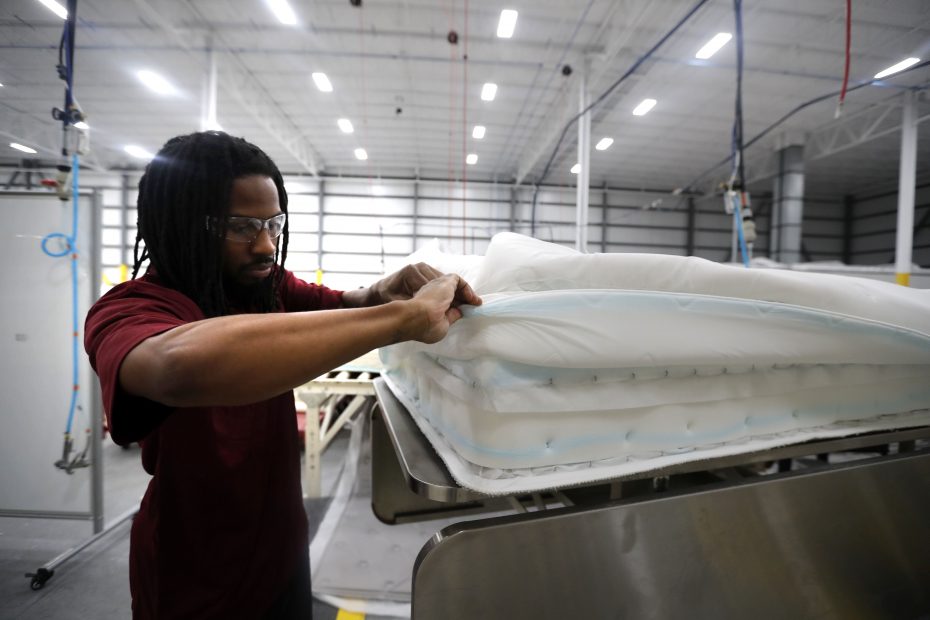 Jaquan Smith pulls down the polywrap that covers the staples and helps the mattress keep its shape at the City Mattress facility. (Mark Mulville/Buffalo News)

PranaSleep's mattress factory, tucked into an industrial complex on Taylor Drive in Depew, has all the makings of your grandmother's sewing room – on a much larger scale, of course. There are giant sewing machines and sergers, spools of thread and fabric, and quiet faces marked by deep concentration.

It all begins at the quilting machine, a sewing machine as tall as a man and wider than a king-size bed.

You know the top panel of your mattress? The part that you lie on? This machine sews together all the material that makes up that top layer – some of them as much as six inches thick, depending on how cushy your mattress is. It also stitches the fancy patterns you see along the top of the mattress (flowers, circles, zigzags). But that stitching isn't just for looks. The more stitching there is, and the closer it is together, the firmer the mattress will be. Less thread stitched farther apart makes for a softer mattress. 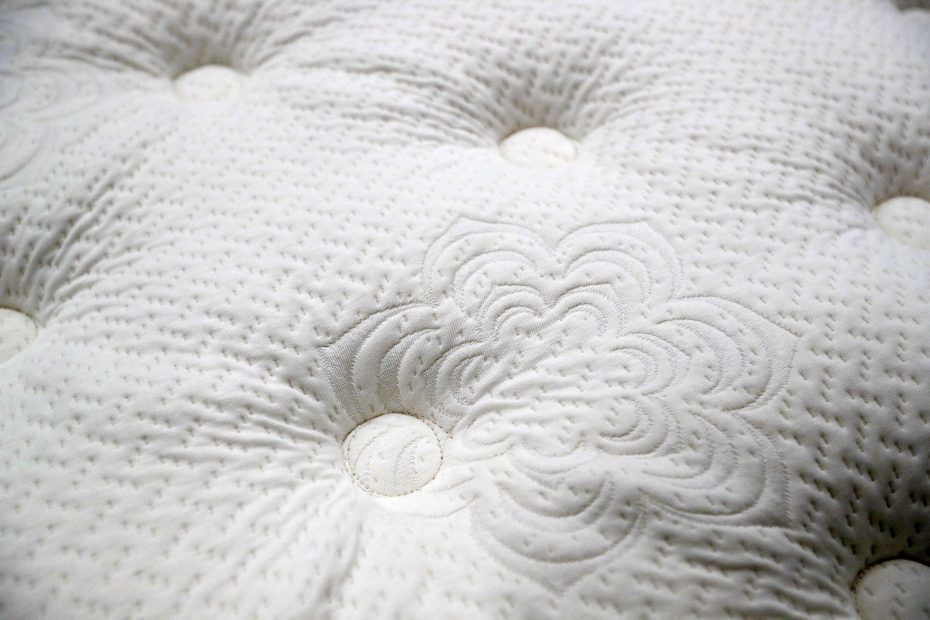 The machine stitches a circle and lotus flower pattern on a mattress at the City Mattress facility in Depew. (Mark Mulville/Buffalo News)

The quilting machine makes the side and bottom panels separately, which are all sewn together later. This is also where the "do not remove under penalty of law" tag is sewn into the side panel.

Even if the panel looks perfect, it's sent to a repair station, which looks like a stainless-steel air hockey table attached to a large sewing machine. Air blows up from the bottom of the table, making it easier for the repair operator to turn and inspect the panels (which can weigh as much as 60 pounds), making repairs to any stitches that didn't take at the quilting machine.

From there, panels go to the flange machine to cinch and close the raw edges of the panels left by the quilt machine. An electric belt pulls the mattress toward the worker while they're sewing, to take stress off the employee's body. Side borders are also sent to a type of flange machine called a double serger, to close and tidy up the raw edges.

Next, at the reverse sew station, everything is done upside down and inside out. The panel is placed face down on its frame and sewn that way so that, when it's flipped inside out again, the mattress has an invisible seam. Other mattresses have what's called a thick "tape line" around the top of the mattress, connecting the border to the top panel.

"It's one of the toughest jobs we have," Bethea said. "There really is no guide. The operator is sewing about a half inch of material."

The guts of the mattress are put inside at the glue assembly station. A worker goes to a book to see what components are used in that particular model of mattress then starts with whatever the core component is, such as latex or coils. The worker staples the bottom panel to the core, which is cut to the width of the mattress, then flips it and begins gluing "comfort layers" on top of the core until it meets the right feel for that model's specifications. The side panels are wrapped in a thin, patented fabric that acts like a rubber band, holding it tight and helping it keep its integrity longer.

To flip the mattress, a worker slides it over and drops it into a trough, making it easier to pick it up and slide it – opposite side up. This time, the mattress is flipped onto a conveyor belt and goes down the line to the taping station, which connects the bottom panel to the side panels.

The completed mattress goes to the final inspection checkpoint, where a worker looks over the entire mattress and compares it to a checklist. The worker will address any last details – touch ups with a lint roller, final hand stitching – and give it the go ahead. If there are serious defects, the mattress will be pulled and, if the problems are bad enough, made over from scratch. The worker scans the tag on the mattress, which fills and tracks the order, then sends the mattress to be bagged, boxed and shipped.

City Mattress was started by Jay Schiller in 1964. His son, Marc, is now CEO and son, Stephen, is credited with creating PranaSleep, which launched in 2004 with a factory in Florida.